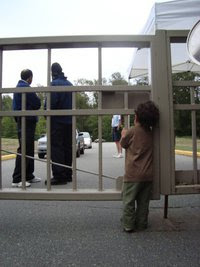 CANADIAN POLITICS BURNABY BC:
'NOISE DEMO' FOR TAMIL REFUGEES BECOMES WEEKLY:
The 'noise demo' outside the detention centre in Burnaby BC where the women and children of the Tamil "boat people" are being held has now become a weekly event. Here's the update from No One Is Illegal Vancouver.
TRTRTRTRTR
Weekly Noise Demo - Release Detained Tamil Refugees:
Time Saturday at 1:30pm - October 9 at 3:30pm

Burnaby Youth Custody Services Centre where mothers and children who
arrived aboard MV Sun Sea are being detained.

For the past 2 weeks we have gathered in front of the Burnaby Youth Custody prison where approximately 90 Tamil refugee mothers and children are being incarcerated. Supporters banged on pots and pans and blew whistles and horns to the beats of Tamil music. A large Tamil banner reading "We welcome you, we support you" was held towards the two detention units where children could be seen waving and smiling, peering through prison bars.

Join No One is Illegal-Vancouver over the next 3 weeks at the Burnaby detention facility to continue to express our love, support, and solidarity with those still being held inside and to call for the immediate release of detained Tamil asylum seekers.

* Bring noise! We want to be visible and be heard from inside so please bring pots, pans, horns, drums, noisemakers (please be aware of noises which may be triggering or traumatizing)

Meet at Edmonds station for rides at 12:45. Last shuttle leaves at 1:15pm. If you have a vehicle and can offer carpool, please contact us at noii-van at resist.ca or 778 885 0040.
________________
Surviving a dangerous journey, 492 Tamil refugees, including women and children, arrived in BC after fleeing war and persecution in Sri Lanka. When the ship first neared Esquimault, territories of the Songhees First Nation, it was immediately boarded by the Armed Forces, Border Services, and RCMP. The refugees are now in jails, facing endless hearings that have revealed the clear incompetency, deliberate negligence, and racism of the system.

In the context of the never-ending "War on Terror" refugees, migrants, and racialized people are increasingly being racially targeted, dehumanized as security threats, and criminalized through unprecedented police and state powers. Despite its rhetoric of 'liberating' and 'protecting' women globally and locally, the Canadian state is detaining an increasing numbers of women and children that cross these borders. In light of increasing repression and exclusionary policies and ideologies, we demand "Justice, Freedom, and Status for All!"
Posted by mollymew at 9:38 PM