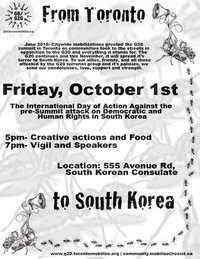 Now this is getting a jump on things. Having experienced what happens at summits directly people in Toronto are going to be demonstrating next Friday at the Korean Consulate to protest the next G20 summit to be held in November in guess what country. Here's the callout from the Toronto Community Solidarity Network.
◘◘◘◘◘◘◘◘◘◘◘◘
Call for Action:
The G20 Sucks! Our Condolences to South Korea
Time Friday, October 1 · 5:00pm - 8:00pm


Three months have passed since the G20 invaded Toronto. Behind miles of security fencing and lines of riot police, representatives from the world’s twenty richest countries and central bank governors met to discuss and further implement their policies of systemic exploitation and destruction. Citywide mobilizations greeted the summit as communities took to the streets in opposition to the G20 and everything it stands for.

Our resistance was met by state-sanctioned violence, police brutality, harassment, and intimidation. The criminalization of dissent is ongoing and our communities are still feeling the painful repercussions. The healing process will be a long one.

Unfortunately, the G20 continues and this upcoming November will spread its terror elsewhere. The legacy of the G20 summit, widespread repression, the targeting of community activists and the attacks on democratic and human rights will be brought to South Korea. To our allies and our friends organizing in Seoul we send our condolences.

For all they are currently going through, for all they will surely have to deal with as the summit approaches we send our condolences. We realize the G20 is nothing to celebrate, but rather something to ragefully mourn. And so, on October 1st, the ‘International Day of Action against the pre-Summit attack on Democratic and Human Rights in South Korea’ we will gather in front of the South Korean Consulate (555 Avenue rd.) at 5pm to deliver the following demands to the South Korean government:

1. The G20 Summit is NO excuse! Stop the crackdown on migrants, street vendors and homeless people!

3. Repeal the “Special Law on the Safe Escort of the G20 Summit” and end repression of the rights to freedom of expression and assembly!

Come out in solidarity and show your support for all those organizing against the G20 in Seoul! Food will be served, and materials will be on hand to construct condolence cards and paper flowers that will be put together in a creative package to be sent to our comrades organizing in South Korea.