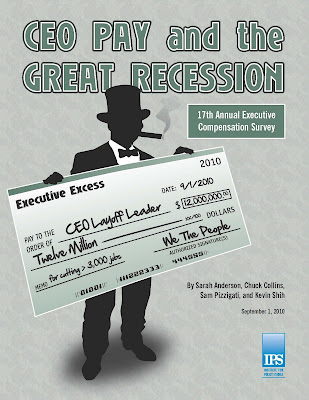 ECONOMY:
YOU GO DOWN THEY GO UP:
Here's an interesting item from the American Institute for Policy Studies. It seems that the recession is hitting some (workers) much harder than it is hitting others (corporate management). Here's the story. You can access the full report at the IPS website. Please note that the IPS names names and salaries and that they also want this news spread as far as possible.>>>
CPCPCPCPCP
Executive Excess 2010: CEO Pay and the Great Recession
By Sarah Anderson, Chuck Collins, Sam Pizzigati, Kevin Shih

The 17th annual executive compensation survey looks at how CEOs laid off thousands while raking in millions.
America’s CEOs had a terribly rough 2009. Or so the national and regional executive pay surveys released so far this year would suggest. “CEOs See Pay Fall Again,” blared one headline early this past spring. “CEO pay rankings dominated by large salary cuts,” read another in June. “Silicon Valley bosses,” summed up still another, “get pay cut.” Month after month, the headlines have pounded home a remarkably consistent message: Corporate executives, here in the Great Recession, are suffering, too.

Corporate executives, in reality, are not suffering at all. Their pay, to be sure, dipped on average in 2009 from 2008 levels, just as their pay in 2008, the first Great Recession year, dipped somewhat from 2007. But executive pay overall remains far above inflation adjusted levels of years past. In fact, after adjusting for inflation, CEO pay in 2009 more than doubled the CEO pay average for the decade of the 1990s, more than quadrupled the CEO pay average for the 1980s, and ran approximately eight times the CEO average for all the decades of the mid-20th century.

American workers, by contrast, are taking home less in real weekly wages than they took home in the 1970s. Back in those years, precious few top executives made over 30 times what their workers made. In 2009, we calculate in the 17th annual Executive Excess, CEOs of major U.S. corporations averaged 263 times the average compensation of American workers. CEOs are clearly not hurting.

But they are, as we detail in these pages, causing others to needlessly hurt — by cutting jobs to feather their own already comfortable executive nests. In 2009, the CEOs who slashed their payrolls the deepest took home 42 percent more compensation than the year’s chief executive pay average for S&P 500 companies. Most careful analysts of the high-finance meltdown that ushered in the Great Recession have concluded that excessive executive compensation played a prime causal role. Outrageously high rewards gave executives an incentive to behave outrageously, to take the sorts of reckless risks that would eventually endanger our entire economy. Our nation’s leading political players have sought, sometimes with grand fanfare, to confront this reality. Leading politicos have been railing against excessive executive bonuses and inappropriately high incentives ever since the economy nosedived. Various executive pay reforms and regulations have even found their way into the statute book. The financial industry reform package enacted this July, for instance, codifies into law several long-term goals of the executive pay reform community, most notably a “say on pay” provision that hands shareholders

the right to take nonbinding advisory votes on executive compensation. Will measures like these rein in excessive executive rewards? Will they begin to significantly narrow the corporate pay gap? That appears doubtful. The UK, for instance, has had a “say on pay” provision on the books since 2002, and that provision has not prevented a continuing executive pay spiral. Despite the recession, UK executive compensation sits substantially above pre-“say on pay” levels. To bring executive pay back down to mid-20th century levels, we need reforms that cut to the quick, that recognize the dangers banks and major corporations create when they dangle oversized rewards for executive “performance.” Some reforms that would move us in that direction are now pending in Congress. Others have yet to make their way onto the congressional docket.

We offer, in this Executive Excess edition, our first comprehensive analysis of all these reform proposals, those already passed, those still pending, and those promising initiatives not yet on our U.S. political radar screen. Our goal: to rate the reform steps already taken and highlight the steps we still need to take. Thorough executive pay reform, we remain convinced, holds an important key to our healthy economic future.
Posted by mollymew at 1:15 PM