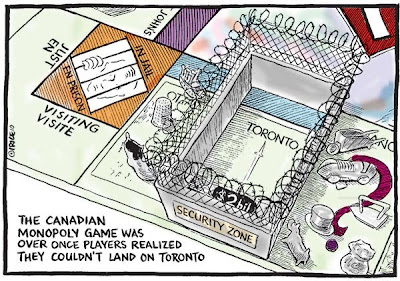 CANADIAN POLITICS:
THE COST OF THE G20:
Things are proceeding as usual in the lala land known as Ottawa, and the reports of the costs of the G8/G20 summits in Muskoka and Toronto are coming back in drips and drabs. It must be pleasing to the Harper government that costs are being reported this way rather than in an overall accounting. The fuzzier the better may be Stevie's motto. The final cost is now estimated at $1.24 billion. The fractured accounting that is being used is guaranteed to add yet another significant stash of cash to that pile. A radio report that I heard today said that it may take millions of dollars to find out how many hundreds of millions were spent.
What follows is one report from the CBC on the costs tallied so far. Two things in this report jump out of the page at me. One is the $14,000 spent on "glow sticks". Believe it or not these things actually have a use in providing light, but they saw little (no?) use. I went online shopping for glow sticks, and the largest size available cost about $1 each for an order of 200 or more. This means that the various police forces now have thousands of left over glow sticks to play with, enough to supply a division of renegade Jedis with light sabers. Have fun guys.
The other matter is more serious. Note the confusion of Conservative House leader John Baird about how many international biggies actually showed up for the party. Anyone other than a politician who is considered "informed" enough to help rule a country knows that there is a significant difference between 50 and 100, let alone 10,000 and 20,000. The cavalier way in which Baird exposes his ignorance says volumes not only about his grasp of affairs but about the contempt which the Conservative Party has for ordinary Canadians. he thinks those who pay the bill for such good times have as little regard for their dollars as he does.
Anyways, here for your amusement is the CBC article.
G20G20G20G20
G8/G20 costs include $80M for food, lodging
The Liberals are strongly criticizing the federal government over expenses incurred during the G8/G20 summits, which, expenditure reports reveal, included $80 million for food and accommodation, $85,000 for snacks and $14,000 for glow sticks.

"This is totally unacceptable," said Liberal MP Dan McTeague, who tabled the expenditure reports in the House of Commons on Thursday.

McTeague had requested details on all contracts for goods or services relating to the G20 meetings.

"The reams and reams of documents present a very disturbing trend and tale, I think, for Canadians," McTeague said. "It suggests there is a very deep and serious problem. There was no accountability or oversight in terms of those expenditures. Money was no object."

According to the documents, $80 million was spent on food and accommodation, more than $34 million on telecommunications and electronics and almost $17 million for vehicle rentals and transportation.

Of the accommodation costs, the RCMP spent under $7 million.

McTeague also asked how many of the contracts were sole-sourced.

He said the released material shows the government's "reckless" attitude toward spending for the events.

But the government defended the costs, saying the majority were security-related.

"Don't forget we were bringing together about [10,000] or 20,000 people, probably 50 or 100 of the most powerful people in the world. There was not only just the issue of terrorism, and the issue of people trying to disrupt the summit, some violently. So, obviously, we have to spend what is necessary to ensure that we keep these people safe."

Items include headgear, glow sticks
The expenditures include $4.5 million for the security fence around the exclusive Deerhurst Resort in Ontario's Muskoka region, the G8 event host site, along with more than $300,000 for sun screen and insect repellent for the police guarding the fence.

Also detailed are a $3.2-million single contract for shuttle buses and a $2.2-million car rental bill — for a single day. ( Try costing that one out. I'm surprised there are so many rent-a-cars in Ontario, let alone in Toronto-Molly )
An $85,000 tab is listed for snacks at the exclusive Park Hyatt hotel in downtown Toronto and $68,340 was spent on Nikon cameras, according to the documents. Another $45,000 was spent on binoculars.

In addition, the costs include $1.2 million on condominium rentals, $14,049 for glow sticks and more than $13,000 for "miscellaneous textiles, headgear and umbrellas," the documents show.

No final tally has been given yet on the price tag for Canada's hosting back-to-back summits in Ontario's Muskoka region and downtown Toronto in late June, but the overall cost has been estimated to be about $1.24 billion, including at least $930 million for security.

The auditor general's office says a report on the security costs of the G8/G20 summits is scheduled for spring 2011.