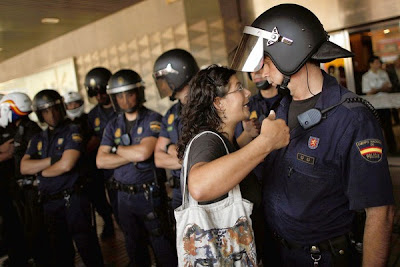 INTERNATIONAL LABOUR SPAIN:
SPANISH GENERAL STRIKE LARGER THAN EXPECTED:
The first general strike in Spain since 2002 was much larger than previously expected. Union sources claimed up to 10 million strikers or over 70% of the workforce, making this strike far more 'general' than previous ones held in France. While such estimates have to be taken with a grain of salt, particularly as one of the claimants is the CCOO led by "ex" communists with a very touchy relation with such a thing as truth, there is little doubt that Spanish workers turned out in numbers far exceeding anything that anyone expected. The government was reduced to mumbling about "partial and minimal disruption" instead of doing the usual thing and offering its own (far lower) numbers. This turnout occurred despite persistent scepticism about the efficacy of the strike in forcing the government to retreat and also widespread cynicism about the connections of the two larger union federations, the UGT and the CCOO, with the politicians who have concocted the austerity measures.

It is possible that a large number of Spaniards went out on strike despite rather than because of the call of the UGT and CCOO. There were clashes with the police in both Barcelona and Madrid. 38 people were arrested in Madrid and 43 in Barcelona. 58 people were injured in clashes in Barcelona, and by some miracle of balance 30 of those were police officers. One thing that struck me in viewing television coverage of the events in Madrid was that those who clashed with the police and tried to 'enforce' the strike on non-strikers seemed to be all CCOO members. NO CCOO bureaucrat were ever endorse such a thing in public, and it is highly doubtful they would even encourage such a thing in private, even by the old "wink, wink, nudge, nudge". It is entirely possible that the membership of the CCOO has at least partially escaped the control of the union bureaucrats.

Here is an article from the Irish Times that gives a fair assessment of the strike.
SGSSGSSGSSGS
Spain's unions claim 70% support for strike
JANE WALKER in Madrid

SPANISH TRADE unions claimed 70 per cent of workers had supported the general strike yesterday and while the action had some impact, it failed to bring the country to a total standstill.

With a 20 per cent unemployment rate, many of those who had jobs were reluctant to jeopardise them by supporting the strike. Others had been warned they would have their pay docked if they failed to report for work.

One of the worst affected sectors with cancellations and delays was transport. Minimum services, previously agreed with the unions, kept major cities moving. Half of Madrid’s metro and local commuter trains ran during peak hours, but violent picketing forced many buses off the roads and long-distance train services were severely restricted.

Airlines cancelled many flights to and from Spain, although fewer than had been feared. But dozens of disappointed Manchester United fans were unable to travel to see their team face Valencia in the Champions League match on last night.

Madrileños were left in no doubt about the strike when they left home in the morning and were greeted by piles garbage and overflowing rubbish bins on the streets. The Spanish capital is fortunate in that it enjoys rubbish collection seven nights a week. But on the stroke of midnight the garbage collectors downed brooms and left their trucks in their depots to join the protesters.

Wholesale food markets around the country were closed, leaving many local shops without fresh supplies. Moreover, much of the country’s industrial sector, including motor manufacturing, shipbuilding and factories were at a standstill.

The day passed peacefully although there were clashes with police in some parts of the country. Red-shirted and flagwaving pickets persuaded many smaller shops, bars and restaurants around the country to remain closed but a heavy police presence enabled department stores and other shops to open their doors. “We voted for a left-wing government, but we are facing a government of the right,” said one angry protester.

Most hospitals and medical centres worked as normal although staff said they said patient numbers were down. The majority of schools opened although in some there were more teachers than pupils because school bus services had been cancelled.

The strike was called to protest against the government’s austerity measures, approved by the parliament, which cut the wages of public sector workers by 5 per cent, froze state pensions and introduced new labour laws which will make it easier and cheaper to fire workers and raise retirement age from 65 to 67.

On Friday prime minister José Luis Rodríguez Zapatero will present his budget to the parliament when he is expected to announce even more draconian cuts and tax increases. But Spain’s economic crisis is so grave that he has little room for manoeuvre. He is trying to reduce the 11 per cent budget deficit to 6 per cent in 2011.

“It is well known that I didn’t want this strike, but I respect the right to strike and also the right to work,” he said yesterday, adding that he was ready to meet the unions whenever they wanted but could not go back on the austerity measures.
SGSSGSSGSSGS
There were, of course, demonstrations across Europe on September 29, the most notable being that held in Brussels and supported by the mainstream European unions. Estimates for the crowd there range at about 100,000. There were also clashes with the police who attacked demonstrators in Brussels, but these were minor.
The Spanish CGT considers the general strike very successful, and I hope to present their assessment tomorrow. The difference between what is happening in Spain and elsewhere is that only in Spain does the libertarian left "have a serious dog in the fight". The libertarian cohort in Barcelona numbered about 10,000 people. Even in Vallodolid it was 5,000. In Madrid Solidaridad Obrera, the CGT and various libertarian social organizations brought out about 15,000 people. In the Basque countries even the isolationist CNT-AIT joined the CGT and the local Basque union the ESK in marches separate from those of the UGT and CCOO. The number at demonstrations actually underestimates the CGT's effect as many of their members were involved in dispersed picket duties. Whether the Spanish libertarians can translate the militancy of the Spanish workers and their distrust of the major union federations into something still bigger and more sustained is still an open question, but the beginning looks good.
Posted by mollymew at 9:21 PM