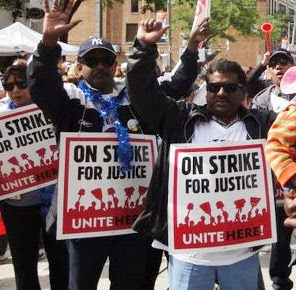 CANADIAN LABOUR TORONTO:
MORE DRAMA OUTSIDE THAN IN THE FILMS:
As the glitterati gather for the Toronto International Film Festival hotel workers represented by UniteHere continue rotating one day strikes to pressure the hotel management to see reason and negotiate. Ten Toronto hotels are in strike position, and as of this writing three have already seen strike action. Here's the story from the UniteHere website.
TLTLTLTLTL
Local 75 Workers Strike Three Hotels During Toronto Film Festival

Hotel workers at the Hyatt Regency have staged another one-day walkout Sunday, September 12, bringing to three the number of hotels experiencing strikes during this year's Toronto International Film Festival.

Hotel workers, who also staged a one-day strike at the Westmont-owned Fairmont Royal York last Friday and the Holiday in on Bloor St. on Saturday, have earned the full support of the film sector including ACTRA Toronto, IATSE Local 873 and film celebrities including Martin Sheen. "The film industry relies on the hotel sector, and we're not going to stand by and let these hotel workers be exploited," said Heather Allin, Toronto president of the Alliance of Canadian Cinema, Television and Radio Artists.

"As TIFF celebrates the new Bell Lightbox with a street party for Torontonians, and the Hyatt boosts its profits with film guests this week, we continue to be treated like second-class citizens by the Hyatt owners," said Althea Porter-Harvey, a Room Attendant at the Hyatt Regency. "We deserve better than that. We're joining the street party today."

Local 75 spokesperson Cruz-Haicken explained that all of the hotels being targeted for these demonstrations are owned by the same company, which is engaged in contract talks with UNITE HERE.

"We exercised restraint and have provided quality service at Toronto hotels owned by Westmont through the G20, the Queen's visit, Pride Week and Caribana," added Porter-Harvey. "Westmont has had ample time to sit down and negotiate with us as contracts have expired, but they've chosen to ignore us and treat us with disrespect."

Striking workers contend hotel management is trying to lock them into cutbacks and new shift schedules imposed during the recession.
Posted by mollymew at 9:30 AM