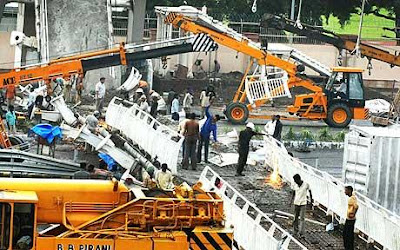 SPORTS:
AN EVEN DARKER SIDE OF THE COMMONWEALTH GAMES:


By now a good chunk of the planet's population has been treated to pictures of the shambles that are the athletes quarters in New Delhi which have been more of less "built" for the upcoming Commonwealth Games. You can see a montage of these "glowing jewels" in this article from the Australian Mercury. Some are quite "impressive", even outdoing some of the rat traps that Molly lived in when she was younger. No doubt, however, the living conditions of the labourers who have been exploited during the construction would make these dumps look like paradise.


That's a point that shouldn't be lost in the flurry that has developed about who is going to send their athletes to the Games and who is not, and the "megapolitics" of the Games as described in this article from The Nation. Here's an article from the Street News Service (the news service of the International Network of Street Papers) about the conditions that workers at the project and poor residents of New Delhi have had to endure in this corrupt bid for glory and profit.
CGCGCGCGCG

Commonwealth Games: Establishing national prestige at the expense of India’s poor
Street Speech (USA) 06 September 2010
Rajeev Ravisankar looks at the impact of the 2010 Commonwealth Games on India’s capital New Delhi. He uncovers the exploitation, hazardous living and working conditions and the violation of labour rights that accompany the world’s largest multi-sport events. (920 Words) - By Rajeev Ravisankar

In India's capital New Delhi, laborers continue working day and night as the city prepares to play host to athletes from 71 countries for the 2010 Commonwealth Games, which begins in early October. The event, the world's third largest multi-sport event, mainly involves countries that were colonized by the British and was initially called the British Empire Games.

The upcoming Commonwealth Games is not only an athletic competition, but a spectacle for India to project global power. Recently, the President of India's ruling Congress Party Sonia Gandhi said "The success of the Games is that of our country, not of any party or of any individual…The prestige of the nation is involved."

Suresh Kalmadi, chairman of the Commonwealth Games organizing committee, has repeatedly asserted that this will be "the best Games ever" and hopes that this will be a stepping stone to fulfilling India's future ambitions to host the Olympics. Also, he has stated his desire to establish New Delhi as a "world class city."

However, a number of problems have emerged throughout the implementation process from soaring costs and corruption to labour exploitation and other human rights abuses. The initial budget estimates put costs at $407 million, but now the official figure has jumped to $2.3 billion and independent estimates suggest the cost could be as much as $6.4 billion. Also, according to the National Campaign on Dalit Human Rights, $150 million in funds allocated for marginalized communities have been illegally diverted to cover expenses related to the Games.

In order to meet deadlines, construction labourers are being overworked in 12 hour shifts, seven days a week and are paid less than the minimum wage, which ranges from $3.00 and $6.70 a day depending on hours worked and type of labor. Women are paid less than men for the same work, and reports point to the use of child labour at some sites. The workers toil in intense heat of 90-100 degrees Fahrenheit, the average in New Delhi during the summer months.

According to the Peoples Union for Democratic Rights (PUDR), an Indian human rights organization, workers are not provided safety equipment such as helmets, safety belts or even shoes. Also, their living conditions are substandard. Many are migrant workers from other states in India and have set up temporary shelters on or adjacent to construction sites. A report by the Housing and Land Rights Network (HLRN) indicates the situation is not much better for workers who are provided temporary housing. "Six to eight labourers share 10 feet by 10 feet brick huts…There is no electricity, ventilation or place to cook." There are also not enough toilets for the number of workers living in these camps.

These hazardous working and living conditions have contributed to the deaths of a number of workers. At least 49 workers have died on construction sites for the Games. An Outlook magazine article published in April of this year stated that "70 deaths have taken place during construction work and due to diseases caused by the unhealthy conditions prevailing at the living quarters of the labourers.

Aside from labour rights violations, people living in urban poverty have been forced into a more desperate situation. Efforts to "beautify" Delhi have led to evictions, demolition of settlements and slum clusters, and large scale displacement affecting thousands of people. Realizing that it is not possible to remove all the slums before the games, authorities have decided to put up bamboo screens to hide remaining slums. Also, street vendors, small shopkeepers, and rickshaw pullers have lost their livelihoods due to restrictions.

So-called "beggars" or panhandlers are being targeted vigorously by authorities. New Delhi's Social Welfare Minister Mangat Ram Singhal summed up the government's intentions: "We Indians are used to beggars but Westerners are not and so we need to clean up. We'll catch them all." According to an article in Frontline magazine, the city government has established "zero-tolerance zones" and created teams to round up people who are panhandling. Officials have increased the number of mobile courts to prosecute these people.

Unfortunately, other parts of the world have experienced similar issues when preparing to host large scale events. For example, in the lead up to the 2010 World Cup in South Africa, construction workers went on strike for a wage dispute. Riot police fired teargas and rubber bullets to break up a protest by security guards over low pay. In addition, thousands of people were evicted during construction for the World Cup. Many did not receive compensation or alternative residence, and those who were resettled lived in terrible conditions.

Before the 2008 Olympics in Beijing, China, 1.5 million people were displaced according to the Centre on Housing Rights and Evictions (COHRE). Closer to home, thousands of public housing units were destroyed before the 1996 Olympics in Atlanta and 30,000 residents were pushed out due to gentrification.

These are just a few recent examples that show the social and human costs inflicted when cities and countries host games. Clearly, Indian government officials and private sector interests have not learned from these experiences, as they have pursued national prestige at the expense of the poor.
Posted by mollymew at 8:40 PM