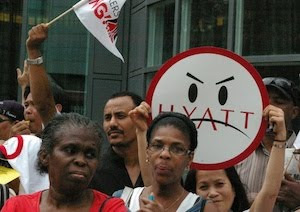 CANADIAN LABOUR TORONTO:
FANTASY MEETS REALITY AT THE TORONTO INTERNATIONAL FILM FESTIVAL:
The Toronto International Film Festival opened on Friday, and delegates were treated to a demonstration of the frustration of the workers employed by the host hotel. The workers of the Hyatt Regency, represented by Unite Here Local 75, staged a one day walkout to protest management intransigence in contract talks. Here's the story from a union press release.
OLOLOLOLOL
Hotel workers forced to take one-day strike at Hyatt Regency Toronto
Film industry unions support workers striking against TIFF hotel headquarters


TORONTO--Hotel workers at the Hyatt Regency, home of this year's Toronto International Film Festival, have begun a one-day walkout after they bargained past a midnight deadline without reaching a new agreement.

Picketing is to begin at 7:30 a.m. this morning. A massive rally of hotel workers and others from across the city will take place at 5:30 p.m. today in front of the hotel. Unions from the film sector will rally in support of the hotel workers, saying that good hotel jobs, like good film jobs, are vital for the economic health of the city.

"We will be holding one day of action on Friday and will be back to work on Saturday," explained Althea Porter-Harvey, a Hyatt employee and member of UNITE HERE Local 75 which represents the workers. "We are still hopeful we can reach an agreement."

"While we're struggling to make hotel jobs good jobs, these wealthy owners keep buying and selling properties and treating us as if we still in a recession," Porter-Harvey continued. "The Mangalji and Pritzker families, who own and operate these hotels, need to have more regard for hotel workers. All we are asking is that they not lock in the recession for their workers, because the recession is over in the hotel sector."

The Hyatt, the host hotel for the Toronto International Film Festival opening next Thursday, is owned by the little-known Mangalji family and operated by the Pritzker family, which cashed out over $900 million in their sale of Hyatt shares in late 2009.

"Our industry spends a lot of money on hotels and it's frankly shocking to discover that the people who work so hard to make up the rooms we're paying for are being treated so poorly," said Heather Allin, President of ACTRA Toronto. "If Toronto's hotel workers cannot resolve relations with Hyatt to ensure workers are treated with respect, then my union will support Hyatt workers in this city and across the continent. They deserve to make a decent living from the work they do. Hyatt will face a determined boycott if they aren't fair to the hard working people who make their hotels possible."

The hotel workers have sent a public statement to TIFF Festival chief Piers Handling stating that despite the fact most contracts expired on 1/31/2010,

We exercised restraint, had a limited strike at the Novotel Toronto Centre, and did not strike during the G20. We have continued to work through Caribana and Pride and the busy summer tourist season. All the while we have been bargaining with some of the biggest hotel chains in an attempt to get a decent new contract. To no avail. At not a single hotel has management attempted to get a decent new contract… We are aware that [the Hyatt] is a central hotel to the Toronto International Film Festival. There is a legal strike/lockout deadline of September 3, 2010. It is also a hotel chain with examples of shameful treatment of its workers both here and around North America.

In both Canada and the U.S., the hotel industry is rebounding faster and stronger than expected but hotel workers are not sharing in that improved fortune. During the first quarter of 2010, occupancy and average daily hotel rates increased nationwide, leading to a 2.77% increase in RevPAR, or Revenue per Available Room, nationwide, according to Smith Travel Research and Hospitality Valuation Services data.

Local 75 represents over 7,000 hotel, hospitality and gaming workers in the Greater Toronto Area. For more information, please visit www.uniteherelocal75.org .
Posted by mollymew at 11:38 AM