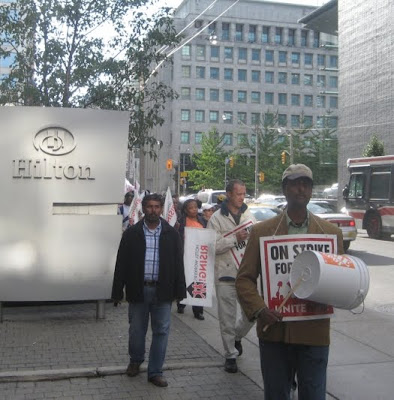 CANADIAN LABOUR TORONTO:
TORONTO HOTEL STRIKES CONTINUES:
The Toronto International Film Festival is over, but the rotating strikes at Toronto hotels continue as management refuses to bargain fairly. Here's the story from Linchpin, the website of the Ontario platformist organization Common Cause.
CLCLCLCLCL
Strike Continues for Toronto Hotel Workers

Toronto, Ont - This year’s TIFF festivities may be over, but for the workers of UNITE HERE Local 75, the struggle against multinational hotel conglomerate Westmont Hospitality Group is just heating up.

Many of the over 2,000 members of Local 75 employed by Westmont are currently working without a contract – some of them since February of this year. Workers accuse the company, which owns or operates 13 hotels in the GTA, of trying to lock its employees into a “permanent recession” - despite the fact that the hotel industry has largely bounced back from the economic crisis of 2008.

“The recession is long over for these guys,” says union organizer Amarjeet Chhabra, speaking about the hotel management. “Yet they’re still using the language of the recession while they negotiate a new contract.”

“Our workers can’t put food on the table, even though many of them are doing the work of two people. It’s just not fair.”

The union has been engaged in a series of high-profile one-day strikes since late June, when workers at the Novotel Toronto Center walked off the job just as the French delegation to the G20 was arriving to check in. Since then they have increased the pressure – carrying out eight such one-day strikes during TIFF.

On Friday September 18, dozens of Hilton employees, joined by workers from the nearby Sheraton Centre Toronto Hotel and union delegates from CEP and CAW, staged a picket and rally outside the Toronto Hilton, while volunteer drummers from “Rhythms of Resistance” helped to keep spirits high. The striking workers appeared energized by the extra publicity generated by sympathetic actors and tourists in town for the Festival, and vowed to continue on until Westmont grants them a fair new contract.

Chief among the union’s demands is the granting of stable hours, better health benefits and a living wage.

“What Westmont has done is dramatically cut back on hours and staffing levels. This has meant that people have basically had to work twice as hard as before, for the same rate of pay,” said Laura Mestre, a room attendant, shop steward and member of the UNITE HERE negotiating team.

“I have personally been working for three months with a torn muscle in my left shoulder. I have had to apply for ODSP [Ontario Disability Support Payments] in order to help pay for my medical costs. I’ve brought the subject up with management… but they don’t care.”

According to Chhabra, this type of injury is not uncommon.

“Most housekeeping attendants are women, and that’s a position where lots of workplace injuries occur. Attendants at these hotels are expected to clean sixteen rooms per shift. At the same time, the company has recently added extra furniture, such as double beds, to many of these rooms. So this means that room attendants have more work to do, but haven’t been given more time to do it.” The end result is a rise in workplace injuries, as attendants struggle to keep up with their increased workloads.

The attempts by Westmont to frame the negotiation in terms of a contracting economy seem to fit into a larger general narrative – that of a looming “age of austerity”. Across the western world, unions are facing a coordinated attack on the working class. In Canada, the Harper government’s response to the economic crisis has been to allow large banks and corporations to effectively manage their own recovery, despite the massive subsidies they have received from the country's taxpayers. In the hospitality sector, this has manifested itself in the sacking of unionized workers and their replacement with more precarious workers – often employed by third-party temporary staffing agencies.

Westmont’s appeal to the need for belt-tightening measures - despite a return to healthy quarterly profits - is only made more egregious by the fact that two of its primary financial partners, Goldman Sachs and Citigroup Financial, were at the very epicenter of the 2008 global economic crisis, and have between them received over $50 billion in federal funds from the US Treasury.

It is this attempt to play the unfortunate victim of circumstance, and the company's stubborn refusal to renegotiate a fair contract with its employees that Chhabra says has motivated the workers to strike.

“We want to settle… but we also want a fair contract. And we’re prepared to take any action necessary to get it.”

For more information on the hotel workers' ongoing strike, and for a list of potentially affected hotels, see: http://www.uniteherelocal75.org/jm /
To send a direct message to Westmont, contact them at their Toronto headquarters:

I hope the unions rot in hell- they are the cesspool of corruption to which nothing the rest of the world can be compared. I hope they are all fired and westmount hires people at a lower wage who WANT a job

More corrupt than the banker friends of the hotels ???? Come on now.