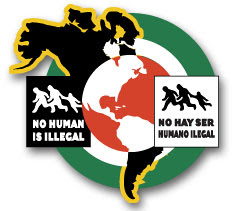 AMERICAN POLITICS:
PASSING THE 'DREAM ACT':
The following appeal is from the American Jobs With Justice Coalition, and it is more for our American readers as it pertains to a specific reform in US immigration policy, reform that is long overdue whatever the xenophobes may think. The orthodox anarchist position, of course, is that there should be no restrictions on the movement of people across the globe, but while awaiting that millennium small reforms are somewhat useful.
APAPAPAPAP
PASSING THE DREAM ACT:
The Development, Relief, and Education for Alien Minors Act - more commonly known as the DREAM Act - would allow undocumented youth raised in the United States who have completed their K-12 education with no criminal record to earn their citizenship through either a college education or military service. Although the legislation has widespread support, the DREAM Act has stagnated in Congress for nearly a decade.

But the long wait could be over! Today at 2:15 ET, the Senate is scheduled to vote on cloture for the defense authorization bill, which currently includes the DREAM Act. If passed today, a vote on the DREAM Act amendment is expected on Thursday.

With the DREAM Act passed, qualifying undocumented youth would be given the chance to invest in themselves and their futures through education or the armed services, shattering the glass ceiling impeding these young people from reaching their full potential. Communities, which have already invested so much in these youth through the primary education system, would benefit from a more qualified, better-educated pool of citizens.

Young people have organized a dynamic nationwide grassroots movement to pass the legislation. Just this week alone, young people have made over 34,000 calls to Congress. But Senators who have long supported the bill have not been vocal enough highlighting the importance and need for grassroots efforts to push Senators to vote their conscience, even if it means crossing the party lines. We must firm up the support of DREAM allies in the Senate, and move Senators to vote yes.

This is what the DREAM Act needs from you this week:

1. Call your Senators at 1-888-254-5087 and tell them: Vote 'YES' on the cloture motion for H.R. 5136 and 'YES' on the DREAM Act amendment, and ask them to give a speech on the Senate floor in support of the DREAM Act.
2. Submit a Letter to the Editor to your local papers urging the passage of DREAM.
3. Stay connected and engaged to the DREAM actions taking place all over the country. Text DREAM or SUENO to 69866 to get updates about the DREAM Act this week.
4. Find out what is happening in your area--a list of actions can also be found here.

It's important to remember that every action taken is a step forward in making this DREAM a reality. The fate of this historic piece of legislation, and with it, the hopes and dreams of many, lays in the actions we take this next week. Let us move forward working together.
Posted by mollymew at 8:00 PM