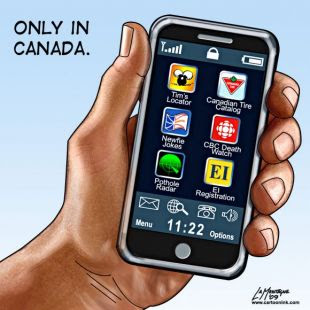 Workers in the Northwest Territories and Nunavut are operating at a disadvantage compared to other Canadian workers as if they are turned down for EI because there is no territorial appeals board. This despite the fact that they pay EI premiums at the same rate as southerners. The Northern Territories Federation of Labour wants to see that changed. Here's the story from the Northern News Service.
NTNTNTNTNT
UNION WANTS EI APPEAL BOARD IN YELLOWKNIFE
Terrence McEachern
Northern News Services
Published Friday, September 24, 2010
SOMBA K'E/YELLOWKNIFE - The Northern Territories Federation of Labour says Northerners are being discriminated against because they are being denied a Northern-based Employment Insurance appeal board.
"Based on our place of residence, we're being discriminated against by not having our own EI board of referees," said Mary Lou Cherwaty, president of the federation of labour.

"And that being said, there's lots of money there to do it. Northern workers and employers both jointly pay into the EI fund at a federal level, (so) why aren't we getting the same services?"

Under the present system, residents in either Nunavut or the Northwest Territories wanting to appeal an EI decision must have their case heard via teleconference by an EI appeal board in Edmonton. Cherwaty said the main reason why the current system is flawed is the board of referees in Edmonton doesn't understand the "geographical, cultural and language" differences that exist in the North compared to the rest of Canada.

"For instance, an employee that's working for an employer who ends up having to 'go out on the land.' It's part of their culture. The employer lays him off because he's taken up too much time or he fires him and the person tries to get EI because he's been let go. Someone in Edmonton doesn't understand what 'going out on the land' means," she said.

"So they think he abandoned his job, of course he doesn't get EI, whereas here, somebody would reasonably know that was to provide food and sustenance for his family."

Cherwaty's goal is to establish an appeal board in Yellowknife comprised of members that understand Northern issues. Similar to the 83 other appeal boards across Canada, establishing one in the city would require six board members - two employer representatives, two employee representatives and two chair persons.

She estimates the cost of establishing an appeals board would be $63,256. This figure doesn't include board members' salaries, but does include travel and training costs for the board members at one of the other EI boards in Canada, as well as the costs associated with the Yellowknife office set-up.

Cherwaty has been trying to establish an appeal board in Yellowknife since 2008. Over this time, she's contacted several politicians and government officials about the issue, including Western Arctic MP Dennis Bevington. Bevington said he's limited in what he can do because the proposal has a financial obligation and a private member's bill cannot impose any financial obligations on the government.

He also said raising the issue in the House of Commons is difficult because the NDP is limited to four questions during question period, and national issues tend to take precedence.

But Bevington did write a letter to Diane Finley, minister of Human Resources and Skills Development Canada, about the need for an EI appeal board in Yellowknife. In a written response to Bevington dated June 2, 2009, Finley wrote the department hasn't received "any negative feedback" with the current system of conducting hearings via teleconference with Edmonton. The letter also states that neither the NWT nor Nunavut meet the criteria for having an EI appeal board because the number of appeals in these areas falls below the six per month average that is needed.

Whitehorse has an EI appeal board, and during this same period received 6.1 appeals per month. Cherwaty said if EI applicants considering an appeal weren't discouraged and deterred from doing so under the current system, the numbers of appeals in the NWT and Nunavut would be higher.

Finley was not available for comment.
Posted by mollymew at 8:27 AM