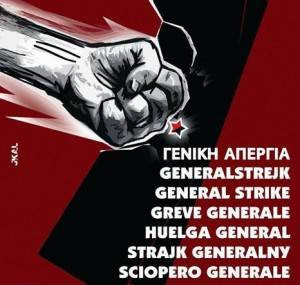 On Thursday, September 29, there will be a general strike in Spain protesting the Spanish government's austerity measures, mislabelled "reforms". All of Spain's labour federations are supporting this action, some more than others. As Molly has mentioned before on this blog there is some suspicion that the major union groups (CCOO- controlled by more or less "ex" communists and the Socialist Party UGT) deliberately set the date far enough into the future to allow for backroom political maneuvers after a less than stellar turnout for the previous public sector general strike earlier in the year.

The months have come and gone, and the government seems even less willing to compromise than it did earlier in the year. While the CCOO and the UGT have been rather tepid in their promotion of this strike Spain's third largest union federation the anarchosyndicalist CGT has thrown a tremendous amount of work into promoting the general strike. The smaller anarchosyndicalist unions such as Solidaridad Obrera, the CNT Joaquin Costa (aka the CNT-Catalunya) and the CNT-AIT have also been prominent in their support. The first two unions have entered into an informal alliance with the CGT so as to present an unified libertarian front. The CNT-AIT has decided to go it on their own.

Whether it is politically wise to put such emphasis on what, given the still solid control of the CCOO and UGT over the majority of Spains unionists, may be a potentially embarrassing show of weakness rather than strength is an open question. The anarchosyndicalist unions have all emphasized that this one day general strike can be only a beginning. The ability to go forward, however, depends upon just how popular or unpopular the work stoppage turns out to be, and just how much the ordinary workers feel that the policies of the CCOO and UGT, limited and cowardly as they are, are the only realistic course. in my mind the prospects aren't bright. In a preliminary libertarian demonstration in Barcelona on September 18 held by the alliance of the CGT, Solidaridad Obrera and the CNT Catalunya the turnout was only about 1,000 people. The CNT-AIT which didn't participate would probably have been only able to add another 100 or so people to the crowd.

Put this in context of the Barcelona demonstration for increased Catalan autonomy last July where the turnout was about 1.1 million. What is probably happening is that many average Spaniards have adopted an attitude of resigned fatalism to the severe economic crisis that Spain faces. The libertarian unions have a hard row to hoe if they hope to push this general strike beyond a token gesture of (weak) opposition.
The Spanish general strike is supposed to be part of an Europe wide 'Day of Action' on the 29th. This event has been called by the European Trade Union Confederation, and its main event will be a demonstration in Brussels, the seat of most of the activities of the European Parliament. Despite some rather cocky chest thumping at the Facebook site of the event (ahem- "towards the 1st European General Strike or even the World General Strike") the "action" proposed by the ETUC consists of little more than a series of demonstrations which national unions may or may not support with whatever attention they may or may not think it deserves. The only country in which there may have been another general strike ie Greece will be a no show this time around. One doesn't have to invoke treachery to explain this. After 6 (or is it 7 ?) one day general strikes this year with no results in terms of modifying government plans the main union federations in Greece are pretty well down to the last dime of their political capital.

Outside of the mainstream unions, however, there is a growing libertarian labour movement. While Spain may be most prominent in this regard this movement is not restricted to the land of Don Quixote. In response to the CGT's efforts towards the Spanish strike numerous groups have sent messages of solidarity with the Spanish workers. The following statement with signatories attached was recently published in an English translation at the Anarkismo site. Since then many others have added their names to the statement. You can see an updated list of the signatories (now over 80) here at the Huelga General event site by the Spanish CGT. This Spanish language site also has a wealth of information and will allow you to follow the strike as it happens.
@L@L@L@L@L
International support for the General Strike in Spain on 29 September

Of all the European Union countries, the Spanish State is facing one of the most difficult economic situations of all, with 20% of the potential workforce unemployed. The measures proposed by the government to fill the State's coffers and stimulate the economy place all the burden on the popular classes in the form of lower wages, consumer taxes, pensions cuts, cuts in unemployment benefits, more privatization and the introduction of more obstacles to workers organizing (such as making it easier for employers to lay off workers and more restrictions on collective agreements).

Ever since the crisis broke, the more militant sectors of the trade union movement [including the CGT, CNT, SO, etc.] have been demanding that a general strike be called to oppose these unpopular measures, but because they were confined only to certain sectors and geographic areas, they were unable to achieve it alone, until a general strike for 29th September was eventually - and reluctantly - called by the big unions, the Comisiones Obreras (CCOO) and the Unión General de Trabajadores (UGT).

It is very important for the General Strike to be a success and for the 29th September to see as many people as possible opposing the policies of the Zapatero government, outside the workplace and on the streets. If the strike should fail, it be not only a failure on the part of those that most of the public considers to be the unions that called the strike - the CCOO and UGT. It will be a failure on the part of the entire working class. On the other hand, the more successful the strike, the greater the success of the workers, as it will provide a clear demonstration of the strength that lies in our unity and will therefore be a step forward in our consciousness and in our levels of organization.

There follows the text of an international statement produced by the CGT and signed by various organizations of a libertarian nature.

We, the signatories to this statement, wish to demonstrate our support for the general strike called by the CGT on 29th September 2010 in the Spanish State.
The widespread crisis is affecting the working class badly, in particular the most precarious sectors of the class. And though the Spanish State is particularly badly affected, this situation is shared by many different countries.

We agree with the reasons why our comrades in the CGT have called this strike, that is to say in order to defend the labour, social, economic and environmental freedoms and rights of all workers and all sectors of the working class in the face of the attacks from the multinationals and financial institutions.

We believe that Zapatero's attempt to force this new labour reform package on the workers, together with his plans for reducing the deficit and reforming the pension system, are completely unacceptable. These measures are extremely unjust, since they shift the burden of the crisis onto the backs of the masses and not the real culprits of the crisis. It is unacceptable that the very institutions that generated the crisis are those who are forcing their proposals to get out of it on everyone else, as it involves a reduction in the rights of the working class and an increase in profits for the capitalist system in general.

We also support the theme chosen by the CGT for this General Strike: "For the distribution of work and wealth". Distributing work means that everyone works less so that everyone can work, by reducing the working day (without a loss of wages) and the retirement age, preventing massive unfair layoffs, as well as overtime, piecework, etc. We understand the distribution of wealth not as a dividend or as shares amongst the population, but using that money on welfare and wage benefits for all the unemployed and a redistribution of resources on the basis of solidarity.

For more information on the strike, see: