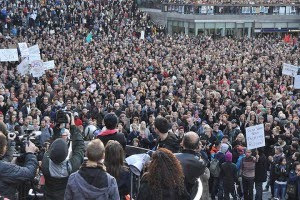 
Last week's national elections in Sweden returned the present right wing government to power and, most disturbingly, the extreme right made unprecedented gains. The following report from the Swedish anarchosyndicalist website Anarkisterna says it all, and it raises some important points.


Molly would add her two cents worth by noting the following. Despite the antique Marxist fantasy followed by all too many anarchists and non-Marxist socialists the advent of 'hard times' seems to have not led to any resurgence of left wing class based movements that fundamentally challenge the present social order anywhere in at least the developed world. If anything the right seems to be 'on the march' worldwide. Where left wing social movements opposed to further tightening of the screws have arisen the main thrust seems to have been an attempt to hold on to what little the lower classes already have, and a more or less implicit (sometimes quite explicit) endorsement of social democratic policies and parties. This despite the fact that in many countries, Spain and Greece come to mind, it is actually "socialist" parties that are doing the dirty work.


Meanwhile the general electorate remains quite cynical, perhaps rightfully so, and opts to vote in many cases for parties whose desire to shift wealth from the lower classes is explicit rather than implicit. This goes hand in hand with an increase in what may best described as the "political superstition" that somehow "immigrants" are responsible for the difficulties that ordinary people face in these hard times. How this can possibly be true is best left to the fevered imaginations of conspiracy theorists. Even if minorities are not "blamed" it may at least feel satisfying to work up a hate for something that can be so easily identified. The left, in general, offers no such easy fantasy. Its social democratic wing has long since abandoned any pretence to having so crude a thing as "enemies". Its orthodox communist wing has not only been disgraced by its history of being worse than the old order. Its idea of the enemy as the 'top-hatted capitalists' ( excluding government bureaucrats of course ) rings hollow in the modern world.


Too much of the rest of the left beyond the social democrats and commies spends its time tilting at the windmills of "isms" having abandoned all hope of a rational road to a better society. It takes a developed taste for either masochism or the 'one downmanship' of identity politics to find this sort of "politics" satisfying...especially as "the enemy" can easily be defined as something approaching 98% of the population. This is not politics. It is psychology gone cancerous.


The Swedish comrades end their article with some questions rather than with assertions. This is undoubtedly the best way to proceed. As an anarchist I am convinced that the anarchist tradition contains many of the ideas that are necessary to oppose the rightward drift of most of the developed world. I am not, however, so unrealistic as to suppose that either I or any wing of the anarchist movement today have a magic pocketful of 'solutions". What is sure is that the main opposition to the right has no practical plan. For anarchists the balancing act is an age old one, one of walking the fine line between collaboration (leftism under an anarchist name) and irrelevancy( either 'purism' or defining away the concerns of ordinary people to focus on 'psychoboo' ). Where the tightrope is depends upon both time and place. Let's hope there are enough political acrobats in our ranks.


Here's the article from Sweden.
@@@@@@@@@@
Where do we go from here?
On how to challenge rightwing racist class politics
Lördag 25 September

The elections of September 19th in many ways mark a sad turning point in Swedish history. Since of that date, Sweden joins the growing number of EU member states run by rightwing governments with the participation of the extreme right.

For the first time, a rightwing government was re-elected in Sweden. For the first time, a populist racist party, Sverigedemokraterna (Sweden Democrats) – with roots in the extreme right scene – entered the Parliament. And for the first time a Nazi party gained entrance into a municipality. The leader of Svenskarnas Parti (Party of the Swedes) – formerly Nationalsocialistisk Front – got a chair in the small town of Grästorp.

The reaction to the election was swift: demonstrations in Malmö, Gothenburg and Stockholm the following day gathered thousands of people, in Stockholm up to ten thousand. Numerous demonstrations have since taken place in different places and many more actions are planned for the coming weeks and especially for the grand opening of the Parliament.

Many people are appalled and outraged at the results of the elections. Bit by bit, the right wing government has been dismantling the welfare state, labour laws and social security systems, replacing them with the freedom of the individual consumer – thereby paving the way for the extreme right. But so have the Social Democrats, the Left and the Greens: By not challenging the politics of the government and putting forward a concrete red and green vision, the stage was set for the racists, posing as the sole alternative to the status quo.

The Sweden Democrats have rather successfully spread the myth of immigration as the one political issue none but them dares to address. This being far from true (quite the opposite, by being tough on immigration any politician comes across as determined and energetic), it nevertheless gained them a lot of attention. And even though being false, it still was a simple answer to a number of important questions: Why is society not as solidaristic as it used to be? Why are so many – especially young – people unemployed? Why is all this downsizing occurring?

Everything was played out to be the fault of “mass immigration”.

These questions are relevant to a lot of people in everyday life today, and so is addressing them. The anxiety is real, it is the result of precarious labour, money that is never enough, climate change that is being neglected, insecurity, frustration, violence and welfare cuts – in other words the results of political decisions. The question radical social movements have to ask themselves is how to address these issues and challenge these politics?

How do we turn protests against the Sweden Democrats into resistance against the racist class politics of the right wing government? And how do we transform our resistance into a constructive force – self organizing local communities and building strong popular movements?

Where do we go from here? Share your experiences with us!
Posted by mollymew at 6:26 PM