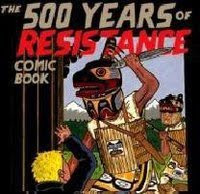 It's coming up this weekend, the Winnipeg Radical Bookfair, and the opening item will be a book launch for the graphic novel 'Five Hundred Years of Resistance'. Here's the promo.>>>
@@@@@@@@@@

More Info
Join us for the kick-off event to the Winnipeg Radical Bookfair:
http://winnipegradicalbookfair.blogspot.com/

Gord Hill is a member of the Kwakwaka'wakw nation on the Northwest Coast. Writer, artist, and militant, he has been involved in Indigenous resistance, anti-colonial, and anti-capitalist movements for many years.

He will be launching his recent comic book 500 Years of Resistance.

The book is a powerful and historically accurate graphic portrayal of Indigenous resistance to the European colonization of the Americas, beginning with the Spanish invasion under Christopher Columbus and ending with the Six Nations land reclamation in Ontario in 2006.