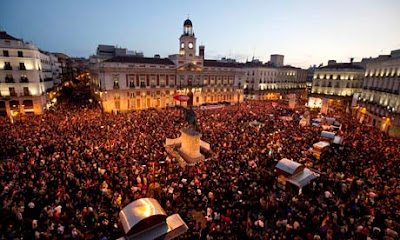 INTERNATIONAL LABOUR/ANARCHOSYNDICALISM:
LATEST SPANISH GENERAL STRIKE A HUGE SUCCESS:
March 29th saw a one day general strike in Spain that eclipsed previous general strikes in magnitude if one is to judge by the drop in energy consumption, often the best way of estimating the impact of general strikes on the economy as a whole. According to this measure this strike was much more popular than that of September 2010 being actually the largest in 30 years in Spain. There are actually quite important differences between this event and previous strike protests in Spain. Not only was this the largest demonstration of working class resistance to state plans in Spain. It was also set against a background of conservative governments in both Spain and the Catalan region.
Even more importantly this strike was not a project of the so-called "majority unions", the UGT and the CCOO. As far as I can determine the date of this strike was more or less set originally by the "nationalist" unions in Euskadi and Galicia. This timing was then agreed to by the CGT and then by the other libertarian unions (the CNT-FAI, CNT-Catalunya, Solidaridad Obrero). The UGT and CCOO were late comers to the endorsement. It happened only after they could gain nothing by their preferred method of bureaucratic negotiation.Then they "signed on" at the last moment. This had its effect. Not only were the so-called majority unions very much a minority vis-a-vis the local unions in Galicia and Euskadi. In several places in Catalonia the gatherings of the UGT/CCOO were less numerous than that of the libertarian unions (who allied themselves to a rainbow of community groups).
No doubt looking at the country overall the UGT/CCOO "mafia" are still the most popular unions in Spain, and their turnout was higher overall than that of their libertarian and nationalist competitors. Still, the very fact that they have lost the initiative and have to play catch-up is significant. In previous general strikes the libertarian unions tailed the UGT and CCOO.
What does this mean ? When I look at this from over here in Canada where anarchists in unions are a tiny minority it is easy to be sceptical. I think the fact that the socialist (UGT) and so-called "reformed" communist (CCOO) unions are still a majority amongst Spain's workers is still very significant. Yet....looking at the buildup to the general strike (in my case mostly info from the CGT and the CNT-AIT) I get the distinct impression of watching "people who know what they are doing and have a plan". The libertarian unions, especially the CGT, took the evidence of the past (previous general strikes) and distilled it into a plan for opening a new front against the conservative government. They have also understood very clearly that politics is a process rather than any sudden conversion. Hence the plans already mooted for a two day general strike in the future.
Personally I think is is an historic opportunity for the libertarian unions in general and the CGT in particular. Anarchosyndicalism has always contained an Utopian element with the advent of "libertarian communism" easily following the "general strike". This easy stepwise proposal has been repeatedly disproved in history. In order for the anarchosyndicalist unions to become even major competitors with other unions, let alone usher in a free society, they first have to prove that their tactics are more effective in the here and now in advancing the rights of workers. Spain today is a perfect example of where this is possible. The "program" of the libertarian unions is actually very circumcised- opposition to the austerity of the conservative government. Prove that more militant libertarian tactics are better than the treacherous negotiations of the UGT/CCOO, however, and all sorts of possibilities open up.
What will happen in the future ? Who knows. Yet I see the actions of the Spanish anarchists as great evidence that libertarians in at least one country understand their task as a process that requires planning and intelligence.
Posted by mollymew at 8:04 PM 5 comments: