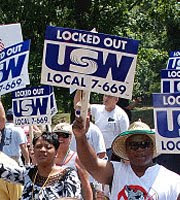 AMERICAN LABOUR ILLINOIS:
A THING THAT SCABS SHOULDN'T TOUCH:
There are some things that inexperienced and ignorant people just should not touch. One of the biggest things would be a nuclear power plant, but that is exactly what Honeywell did when they hired scabs to replace the employees that they locked out. The predictable result..."ooops". Here's the story from the AFL-CIO blog.
NPNPNPNPNP
Explosion at Honeywell Nuclear Plant Staffed by Strikebreakers

This past weekend, just one day after the federal government allowed Honeywell to start up core production at its uranium enrichment facility in Metropolis, Ill., with replacement workers, an explosion rocked the plant. No one was reported injured, but local union officials say the plant has not been in production since the blast.

For the past two months, union workers, members of United Steelworkers (USW) Local 7-669, have been locked out of the plant after contract negotiations broke down over Honeywell’s demand that workers give up their retiree health care coverage and pension plans. Other issues include management demands to eliminate seniority, contract out about 20 percent of the work at the plant and make changes in overtime pay.

Local 7-669 President Darrell Lillie says negotiations will not resume until Oct. 11. In the meantime, the workers are running a 24/7 picket line. Last month, 3,000 people from four states rallied in support of the locked-out Metropolis workers.


Safety is important at any worksite, but especially at the Metropolis plant. This facility is the only one in the United States that can convert uranium into the extremely deadly UF6, which is used in nuclear reactors. Since it is the only conversion plant of its kind in the country, it is critical that workers in the plant be familiar with that plant.

Lillie says it takes many years to learn the skills needed at the plant and the conversion process is hard to troubleshoot if something goes wrong.

Honeywell CEO David Cote, a member of President Obama’s deficit commission, locked out the 230 workers on June 28, even though they offered to continue working under the terms of their expired contract. Honeywell had proposed eliminating retiree health care and increasing workers’ out-of-pocket health care maximums to $8,500 a year.

In a letter to President Obama, the Steelworkers Organization of Active Retirees (SOAR) asked the president to remove Cote from the commission.
Posted by mollymew at 1:29 PM