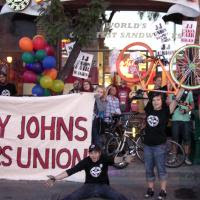 AMERICAN LABOUR MINNEAPOLIS:
JIMMY JOHNS WORKERS DIRECT ACTION:
The IWW drive to unionize the Jimmy Johns restaurants in Minneapolis continues, and direct action (ie doing it yourself without negotiation with the boss) is part of this. Here's a story from the Jimmy Johns Workers website about their latest actions.
DADADADADA
Jimmy Johns Workers Hijack Promotional Event to Press for Tip Jars

MINNEAPOLIS– Jimmy John’s workers were doing more than preparing french bread, cold cuts, and sliced tomatoes for “Dollar Sub Day” this morning as union members and supporters hit the bricks outside stores, asking customers to put up tip jars and use them.

The act of civil disobedience is meant to draw attention to a company policy that forbids tip jars, despite the fact that it costs nothing.

Union members say the action supports their goal of shifting power back to the workers. “We think having customers act in solidarity by putting up tip jars will give workers a glimpse of a better workplace, and a few more dollars in their pockets on one of the most hectic days” says Max Specktor, a bike delivery driver at multiple Jimmy John’s stores.

Workers will receive the same wages on Dollar Sandwich Day, though business (and effort needed to pump out sandwiches) will be fourfold. Tips can help compensate for this extra hard work to promote the company, since the amount of tips is related to the number of customers on a given day.

Despite making hundreds of sandwiches each day, workers are not entitled to a free sandwich unless they work a 7 hour shift, a rarity for a company with standard shifts of 2-4 hours. Today, Jimmy Johns workers will be asked to pay $2.50 for a $1 sandwich, and will not have tips to cover the difference.

“Respect is a core issue at Jimmy John’s, and what we are fighting to regain,” says David Boehnke, an in-shop worker at the Skyway Jimmy John's store in downtown Minneapolis. “While tip jars and free sandwiches may not seem like a big deal, to come in, make $15-25 working all of lunch, make no tips, clean up, and go home hungry—this is not something that connotes respect.”

The Jimmy John’s Workers Union, made up of workers at all 9 Minneapolis franchise locations, filed for an unprecedented union election Monday. They say the will continue to build pressure until the owners Mike and Rob Mulligan cede to their demands, and until fast food and service workers everywhere get the respect and dignity they deserve.