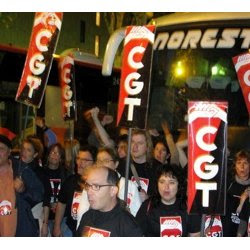 INTERNATIONAL LABOUR SPAIN:
STRONG BEGINNING FOR SPANISH GENERAL STRIKE IN BARCELONA:
The general strike in Spain began with the stroke of midnight in that part of the world, and preliminary reports from the anarchosyndicalist CGT seem to indicate a high turnout in those sectors where they have influence. The CGT strike info source site that Molly spoke about earlier has unfortunately crashed due to too high a volume of traffic. Updated information is, however, available from the CGT website and from that of their paper Rojo Y Negro from which the following report is taken.

Preliminary public opinion polls indicated a high degree of support for the goals of the strike but a generally dismal number of people who said they would take part in it ( anywhere from 9% to 20% ). This was coupled with a disbelief that the strike would change the government's plans and a high degree of dissatisfaction with the larger CCOO and UGT union federations who were seen as being half hearted in their efforts and under political (government) influence. Should the present strike repeat the pattern of that in early summer one can once more expect a large turnout amongst sectors influenced by the anarchosyndicalism of the CGT and Solidaridad Obrera and a poor turnout in most other places. The CGT has already begun the criticism of the majority unions, but whether this will result in a generalized radicalization of Spain's workers has yet to be seen.


The CGT highly values this monitoring and as well as the support we have transmitted to the workers by our call to the general strike and the criticism of the CCOO and UGT for waiting so long to call the General Strike.

The CGT criticizes the minimum services enacted in several companies such as Natural Gas , Atento ( directory services ) ,and in the subway in Barcelona where two or three workers were forced to work where there should only be one worker and in this way a long list where the CGT believes that this infringes the right to strike and we have reported so many to the Labour Inspectorate , the Government and the court .