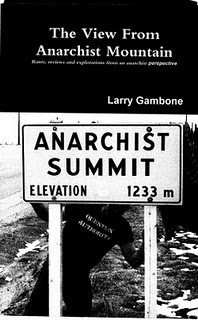 ANARCHIST LITERATURE:
NEW FROM RED LION PRESS:
Hot off the presses from Larry Gambone of Red Lion Press. New titles to grace your library. Here's the info from Larry's Porkupine Blog.
@@@@@@@@@@
The View From Anarchist Mountain


It has been a busy year for me, publishing wise. First The Impossibilists, with my own Red Lion Press, then Nature of Human Brainwork was brought out by PM Press. Now I have two more to offer.
The View From Anarchist Mountain, 199 pages, $16.00 is a collection of my writings over the past 20 years on anarchism, society and history. It is available from AK Press. (For Canadians, order from me at redlionpress@hotmail.com )


Bill Pritchard – Revolutionary Socialist is a 36 page pamphlet that goes for $4.00. Pritchard is best known for being jailed under a bogus conspiracy charge in the aftermath of the Winnipeg General Strike. He was also a militant of the Socialist Party of Canada, the editor of its newspaper, The Western Clarion, and a founder of the OBU. After the demise of the SPC, he was an early member of the CCF and was Reeve of Burnaby for a number of years. Later in life, he returned to the “Impossibilist” socialism of his roots.

“Bill Pritchard – Revolutionary Socialist” - was taken from a talk he gave in 1973. It describes his adventures - and often hilarious misadventures – as a pioneer Socialist on speaking tours of Western Canada more than 90 years ago. He reminisces about a host of fascinating characters and also gives crucial eye-witness evidence about the murder of Ginger Goodwin. It is available so far, only from me.
Posted by mollymew at 11:29 AM