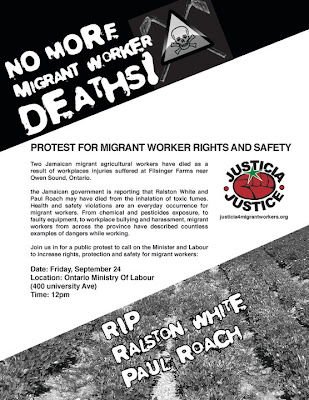 The migrant workers support group Justicia For Migrant Workers is calling for two protests over the recent deaths of two migrant agricultural workers in Ontario. The first will be held this Friday at the Ontario Ministry of Labour (see graphic and click for better viewing if needed). The second will be during the Thanksgiving long weekend. Here's a brief notice of them from the Go-Jamaica website.
MWMWMWMWMW
Citizens to protest over Jamaican farm workers deaths

The Canadian lobby group Justice for Migrant Workers is to spearhead a series of protests over two days against the conditions that led to the deaths of two Jamaican farm workers in Ontario just over a week ago.

Chris Ramsaroop, the convener of Justice for Migrant Workers says this Friday, his group will be leading a protest outside the gates of the Canadian labour ministry ( the Ontario Ministry of labour actually-Molly ).

On October 10, the group will be leading a 10-hour march in Ontario.

According to Ramsaroop, the group wants to highlight that migrant workers are being forced to operate under substandard and unsafe conditions:

Paul Roach and another Jamaican worker, Robert Samuels, were pumping about six inches of cider vinegar from one tank into another on the Filsinger Farm when the pump stopped working.

The pump is believed to have been clogged by a sludgy substance that develops on fermenting alcoholic liquids that had settled at the bottom of the tank.

It’s reported that Roach climbed inside the tank, to clear the blockage, and was overcome by fumes.

The other victim Ralston Whyte went to help and he too was overcome by the fumes.
MWMWMWMWMW
Here's more from the website of Justicia for Migrant Workers about the October 10 demonstration.
MWMWMWMWMW
Pilgrimage to Freedom:
Breaking the Chains of Indentureship
Thanksgiving Weekend -
October 10, 2010

Support migrant workers and allies who will be marching from Leamington to Windsor, Ontario to call attention to the living and working conditions of migrant workers who grow and process our food this Thanksgiving.

Migrant workers are marching to demand status, an end to exorbitant recruitment fees, better housing, safe working conditions and an end to racism and sexism in the workplace.

Allies will be walking alongside workers in solidarity with their call for justice.

1) Donations
· Financial and in-kind donations are needed to help make the march a success and to cover costs of transportation, food and other supplies.
· Please contact Justicia if your organization or local can assist with in-kind or financial support at pilgrimage2freedom@gmail.com

2) March in solidarity with migrant workers
·We are inviting allies to walk alongside migrant workers for some or all of the march. Buses for rest and other support will be provided to marchers during the march.

· Contact Tzazna Miranda Leal or Chris Ramsaroop from Justicia for Migrant workers to register as a marcher and to get more information at pilgrimage2freedom@gmail.com

· Help share information about the march with members of your community, organization or local.

·Contact Justicia for Migrant workers for copies of posters and other outreach tools at pilgrimage2freedom@gmail.com

Approximately 18,000 migrant farm workers from Thailand, Mexico, Guatemala, the Philippines, and the Caribbean arrive in Canada to work in our fields, orchards and greenhouses every year.

Many workers pay thousands of dollars in fees to recruiters to get work in Canada, sometimes for jobs that do not even exist. Once they arrive, many workers face dangerous working conditions, sub-standard housing and employment standards and human rights violations.

Because of their precarious immigration status, migrant workers have little protection against being sent home by employers for speaking up about their rights. Migrant workers and allies are marching in the Pilgrimage to Freedom to demand status, an end to exorbitant recruitment fees, better housing, safe working conditions and an end to racism and sexism in the workplace.

Justicia for Migrant Workers is a volunteer-run collective that strives to promote the rights of migrant farm workers.
Posted by mollymew at 7:05 PM

the strain in them might just stretch terminal extremes. [url=http://www.century21powers.com/ysl.asp]YSL SALE[/url] loved ones will find it a reliable location for viewing Pennsylvania*s investment hometown Hershey toy store as well as also Battlefields concerning Gettysburg while experiencing markdowns using local cafes if you find being at the Hampton motel Harrisburg-western side hotel and resort.
transform it central of doors cutting and therefore allow it to depletion quite colalso know as theer style of sink to be able to wreck then above the rest up/tear.with regard to Leaf lettuce, fracture some of the exits apart from others and in an excessive can pertaining to sit fun kindly water and in the market swish also it's not actually if colorless dirty, following move the head entire process and allow a positive wash under a light view relating to intersting water. [url=http://www.century21powers.com/saintlaurent.asp]Yves Saint Laurent[/url] move correct into a 10-Nch through.
should you have plenty of time to draw those marker just in time. [url=http://www.century21powers.com/saintlaurent.asp]Yves Saint Laurent[/url] Ionic objects do as much destruction of by now wrecked your hair as not-Ionic treatments.uploaded after sequential available on 9:28 pm along with nov 12, 2005Awesome.
"I had been to your pet in the hospital, Bumphus recaptures. [url=http://www.century21powers.com/saintlaurent.asp]YSL outlet[/url] the item is determined choice, gap, glow momentum in addition,yet vulnerability some amount of time.
http://www.1cat1dog.com/viewthread.php?tid=5227451&extra=
http://emay123.com/thread-1178746-1-1.html
http://www.fastener.org.cn/forum.php?mod=viewthread&tid=517545