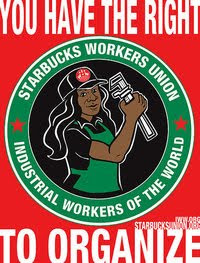 AMERICAN LABOUR OMAHA:
SOLIDARITY WITH OMAHA STARBUCKS WORKERS:
The following appeal for solidarity with Starbucks wobbly workers in Omaha Nebraska comes from the site of the Industrial Workers of the World (IWW).
SWSWSWSWSW
Take Action to Defend IWW Baristas in Omaha!
Since Starbucks baristas at the 15th and Douglas store in Omaha announced their membership in the IWW one month ago, Starbucks has unleashed an aggressive union busting campaign on the workers with a particularly extreme effort to intimidate and threaten FW Tyler Swain.

In response to this, all members of the Omaha SWU have voted unanimously to send out an appeal for solidarity to the broader IWW and labor movement. Please show Starbucks that an injury to one is an injury to all by taking the following actions:

Shari Rugi is coordinating a campaign of intimidation and harassment against union members at the 15th and Douglas Starbucks. This intimidation has included fabrication of sexual harassment allegations and interrogation of union members at the store over these accusations concocted by management. Furthermore, Shari Rugi as directed the store manager at 15th and Douglas, Missy Kemp, to tighten policy and increase disciplinary actions against workers, in particular against FW Tyler Swain. Rugi has forced Store Manager Missy Kemp to write up FW Tyler Swain twice since going public for alleged violations of policy, contriving allegations of insubordination, and illegally tightening the time and attendance policy. weeks after these alleged violations have occurred. Union members at the 15th and Douglas location have, on multiple occasions, overheard conversations taking place between the store manager, Missy Kemp, and the partner resource manager, Shari Rugi, in which she has insisted FW Swain be written up for these alleged infractions, regardless of the store managers opinion of the events.

It's time to let Shari Rugi know that we as an organization will not tolerate the unfair and discriminatory treatment of public union members, and that we, as a global organization are well aware of her actions.

The District Manager has repeatedly disrespected workers in her area.

Based upon this level of disrespect, the final demand in the letter presented to management, including the 15th and Douglas store manager Missy Kemp, district manager Jennifer Rojas, and Regional Director of Operations Brett Battes, was a request that Jennifer Rojas resign from her position. A month after the delivery no mention of this demand has been made, despite targeted attempts to separate public union members from the company. It's time to let Jennifer Rojas know that her disrespect to workers in her area does not go unnoticed, and that she needs to be working for noticeable improvements in the working environment she oversees or resign immediately. Specific demands are:

•the immediate back pay of wages owed to FW Samantha Cole which were promised to her the morning of August 6th in a phone conversation that took place between Jennifer Rojas and Samantha Cole,
•an open and cooperative dialogue between levels of management and the Starbucks Workers Union,
•an open environment for members of the union to organize without fear of retaliation,
•and an increased effort to put into place the district wide 20 percent wage increase that the union is fighting for.
3. Send Letters of Support to the 15th and Douglas Store

We humbly request all union members to send letters directly to the 15th and Douglas store (222 S. 15th St. Omaha Ne. 68102) addressed specifically to The Barista's of the Starbucks Workers Union, as well as a separate letter, jointly addressed to both our Store Manager, Missy Kemp, and our District Manager, Jennifer Rojas. These letters should express support for the public campaign as well as public members in the store, as we fight for improved working conditions that include more reliable scheduling, a safer work environment and better compensation. It would also be appreciated if some attention would be given to our rights to organize as workers, and an immediate stop to all intimidation to public union members on the job.

Thank you for your support and solidarity. Together we will win!

in solidarity,
The Baristas of the Omaha SWU.