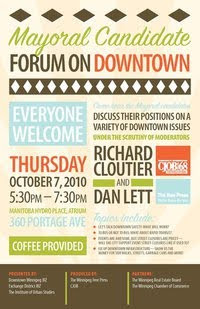 LOCAL EVENTS WINNIPEG
MAYORAL CANDIDATES SPEAK ABOUT DOWNTOWN WINNIPEG:
This is one I definitely won't be attending, but some may have an interest in such things so I reproduce it here. No doubt it will be a great forum for the various and vaporous candidates for Mayor to promise endless wondrous improvements. One should never forget, however, that the present state of downtown Winnipeg is the result of decades of such great "improvement" schemes. Insofar as Winnipeg has "vibrant neighbourhoods" (and yes there are some ) such things have not been the result of political gifts.
WWWWWWWWWW
Mayoral Candidate Forum on Downtown
Time Thursday, October 7 · 5:30pm - 7:30pm

Come hear the Mayoral candidates discuss their positions on a variety of downtown issues, under the scrutiny of moderators Richard Cloutier and Dan Lett.

Topics include:
Let’s talk downtown safety: what will work?
Events are awesome, but street closures are pricey—will the city support event street closures like it used to?
Fix up downtown infrastructure—show us the money for sidewalks, streets, garbage cans and more!
To bus or not to bus: what about rapid transit?