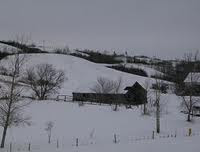 PERSONAL:
GROWING UP WITHOUT THE STATE:

It's been many many years since I left my old home town. 48 if I count right. I left it at precisely the right time, when I was turning 13. Enough of "being one with nature". Time to get into some serious trouble. Which, of course, I found in the (cough) "beautiful" city of Regina. My purpose in what I write below is to show a life that was as "stateless" as possible, under harsh climatic conditions. A life that was endured and sometimes enjoyed by a diverse mixture of ethnic groups and not just some favoured "oppressed" group. Perhaps the town of my childhood memories doesn't deserve recording. Except for one salient feature. It was a town in an area that never had a functioning and overbearing government. Now it is true that most natives in this part of the world grew up under exactly the same conditions with the difference that they saw more of the cops than we did. They also suffered a lot more from the (triple cough) helping arm of the churches, something that simply couldn't happen in a town where there were 3 distinct churches and education was public and non-demoninational.


So let's start with the obvious ie the police. We saw the RCMP a grand total of one time in the 13 years I lived in said town. Did this mean that we were a community of saints. Obviously not. There was the usual vandalism and petty theft which the community found it could deal with far better on its own than by calling for the 'tender actions' of government. Not that the retaliation wasn't sometimes overdone, but short of cutting off fingers or toes any physical pain is preferable to being cast as raw material for socia1l workers to "reform". The one occasion where the state/government proved itself useful was when one farmer went nuts and killed his wife. He came down to the general store to surrender, and he sat there for the required hours until the RCMP felt it was convenient to pick him up.

I mention this just because it is the most obvious "state function" that comes to people's minds, right up there with firefighters and above education and health care. The point that I want to make is that many of the functions that government now performs were or are provided by other means in the not-so-distant past, Or a little bit beyond the city limits in most provinces where rural firefighting is on a volunteer basis. Many other things such as education or health care could easily be provided via cooperatives rather than government. Sometimes a person may recognize all of this but still draw the line at police and the "justice" system. It seems almost unbelievable that people could do without what radicals call "the oppressive arm of the state". It is, however, true that the vast majority of people in history have lived without police (unless you count the agents of the landlord coming to steal things), and there are those such as myself who grew up in such conditions ie it is a living memory.

This doesn't mean that I think some almost mythical revolution could abolish the need for police, courts and prisons overnight. If I were having coffee with a cop I would admit that people like him or her are needed in the near future. Yet I would also say that it is indeed possible to do without police. More than possible. It is a fact that I can remember in my own life. Yet a change in the way people in a neighbourhood act towards each other is a much more effective remedy for crime than more police even today. What anarchists, at least those in the broad majority tradition of anarchism is not a society without demands and rules. It is a society without a specialized caste who enforce such rules or in the case of our present society also enforce the rules of the more wealthy.

What anarchists propose is perhaps summed up by a very clumsy neologism ie the "smalltownization" of a society that presently lives mostly in cities. This is not some marijuana addled vision from the 60s and 70s where everyone has to "go back to the land" and "pretend" to be indpendent of the wider society. What it means is that urban neighbourhoods could grow to have many of the virtues of a small town (such as its ability to live without police) without some of the vices.

Not that my home town was any anarchist utopia by far. We were connected into the wider society by such things as electricity from Sask Power. The electrical grid came in on the same year as I was born. Before that the town had its own generator like most northern communities have even today. This was also the same year, ironically enough, that they took passenger service on the railway away from the town. I see no reason, however, why a crown corporation such as Sask Power couldn't be run as a cooperative. Many advantages actually. Similarily the Province paid teachers' salaries, something that was different from my father's time when teachers were paid by the local community. Another example of memory of a different life. We actually had a Provincial highway a couple of miles from town, but the road to town was maintained (or not) by the RM as were the dirt trails that led out to various farms.

Then, most importantly, we were connected to the wider society and hence to the state by the fact that our rural economy was built on the availability of gasoline (and also oil for the privileged few who didn't have to depend on wood in the winter). Can the universal availability of hyrdocarbon products be provided outside of the state or big business ? The answer is obviously yes as Co-op service stations are a constant feature of most of the western provinces of Canada. If it is done it is possible.

I have to admit that what I have said may seem like something conservative rather than radical, but I have to say that most "conservatives" are actually quite "progressive" in their desire to clear away all obstacles to the increase in power and wealth of the people they imagine are the "wealth creators". My vision is frankly reactionary in the desire to turn back the clock (or ahead if you like) to a different sort of politics and economy. I stand in the anarchist tradition of such people as Paul Goodman in his book 'Notes Of A Neolithic Conservative'.

More on this topic later.
Posted by mollymew at 7:13 PM 3 comments: