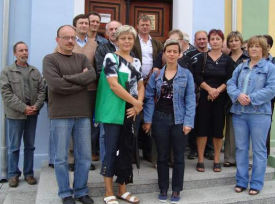 INTERNATIONAL LABOUR POLAND:
FIRED FOR WANTING TO BE PAID:
The following article and appeal for protests comes from the Polish Pracownik network site. Pracownik is an "employee forum" supported by Polish syndicalists where workers can exchange information and contact each other.
PPPPPPPPPP
Workers Fired for not Wanting to Work for Free
---------------------
By pracownik - Posted on 06 wrzesień 2010


Workers from ZEFAM furniture factory in Nowe Miasteczko in the west of Poland were given disciplinary dismissals because they asked when the would get paid.

ZEFAM stands for Zielona Gora Furniture Factory. Workers there had not received salaries for months. Some had not been paid for four months and nobody was receiving overtime payments. On August 19, the workers asked about this. The manager went to consult with the director of the firm, Marek Cierpka. Then he told the workers to "go home". They didn't want to, but the manager shut down the production hall. After some time of not knowing what to do, the workers went home.

The next day, the manager was waiting for them at the gates of the factory with disciplinary dismissals. Most people refused to take them, but they were sent by post to 27 workers. In the dismissals it was written that they were being dismissed for leaving their work place without permission or justification.

The boss claimed that the workers held a wildcat strike.

The next day, the boss proposed that people return to work, but with new contracts, for "trial periods".

Some people were so desperate that they agreed to this, but 11 people refused. Six of them are prevented by security from going near the factory.

But even the ones who "agreed" to the new conditions are not factory. The Mayor of Nowe Miasteczko "mediated" but convinced them to agree to the bad deal. It was agreed that if the workers have no problems or "strikes' over the next two months of the "trial period", then the Director will annul the disciplinary dismissal.

In Poland, all records of work are kept in your "work book". If you were fired, it stays on your record and basically creates a problem for you for years, if not the rest of your life.

The workers at ZEFAM were totally fucked. The majority of them are older, many in their 50s and 60s. Many have worked in the factory 30 or 40 years with no problem. And now they are told they should be on a trial period! If they give their work books, the bosses will write that they were fired. If they don't give their work books to be signed, they will have no proof of the work they have done for decades!

It is important to point out that these people live in a high unemployment area.

The Mayor of Nowe Miasteczko is actually aiding the director, Mr. Cierpka, in committing a crime. Unfair dismissal is not a crime in Poland, but if he is not paying, the company should go into bankruptcy, its assets liquidated and the workers paid from this. But the case is more likely that the company just wanted to find some pretext to get rid of old staff and hope that the workers will not be able to fight back.

We hope that this assesssment of the workers will prove wrong and we support the 11 who refused! Hopefully the next wildcat strike will be a real one!

Protests can be sent to: