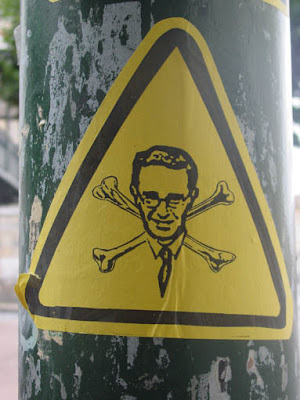 HUMAN RIGHTS:
NO LECTURES FROM WAR CRIMINALS:
This appeal in recently from the School of the Americas Watch. The ex-president of Colombia, Alvaro Uribe, is due to give a series of lectures at Georgetown University as a "distinguished scholar". During his tenure as President Colombia earned the distinction of being the most dangerous country in the world to be a trade unionist. Here's the story and appeal from the SOAW.
SOAWSOAWSOAW
U.S. and Colombia

Georgetown University has recently announced that former Colombian president Álvaro Uribe will be named a "distinguished scholar in the practice of global leadership," and will soon begin giving seminars at the university's Edmund A. Walsh School of Foreign Service (SFS). Uribe has said it is a "great honor" for him, and that his "greatest wish and happiness is to contribute in the continuous emergence of future leaders."

Uribe's 8-year tenure in Colombia was rife with corruption, human rights violations and widespread impunity. In a letter in June to the White House, Human Rights Watch expressed "serious concerns" about the Uribe administration's record on and commitment to human rights, democracy, and the rule of law.


◘◘ More than 3 million Colombians (out of a population of about 40 million) have been forced to flee their homes, giving Colombia the second-largest population of internally displaced persons in the world after Sudan.


◘◘ More than 70 members of the Colombian Congress are under criminal investigation or have been convicted for allegedly collaborating with the paramilitaries. Nearly all these congresspersons are members of President Uribe's coalition in Congress, and the Uribe administration repeatedly undermined the investigations and discredited the Supreme Court justices who started them.


◘◘ Colombia has the highest rate of killings of trade unionists in the world.


◘◘ A clandestine gravesite of 2,000 non-identified bodies was recently discovered directly beside a military base in La Macarena, in central Colombia. When the news became public, Uribe flew to the Macarena and said publicly that accusing the armed forces of human rights abuses was a tactic used by the guerrilla. These comments put the lives of those victims who spoke at the event in grave danger.


◘◘ Starting in 2008, reports came out that the Colombian military was luring poor young men from their homes with promises of employment, then killing them and presenting them as combat casualties. The practice not only served to stack battle statistics, but also financially benefited the soldiers involved, as Uribe's government had, since 2005, awarded monetary and vacation bonuses for each insurgent killed. Human rights groups cite 3,000 or more "false positives".


Students, community activists and religious leaders have already spoken out against the university's decision, and will be planning actions of protest for this fall.

As a person concerned with human rights, I believe that it is not only unacceptable but also completely unethical for Georgetown University to give Colombia’s ex-president Álvaro Uribe the title of “distinguished scholar in the practice of global leadership.” This sends the message that Georgetown University is not committed to upholding human rights or its own professed Jesuit values. I demand that Georgetown sides with the victims of human rights abuses and not with the perpetrators. Uribe is a criminal, and therefore not suitable to teach at a prestigious university such as Georgetown.

Uribe’s eight-year tenure in Colombia was rife with corruption, human rights violations and widespread impunity. In a letter in June 2009 to the White House, the NGO Human Rights Watch expressed “serious concerns” about the Uribe administration's record on and commitment to human rights, democracy, and the rule of law. Uribe’s accusations against union leaders, teachers, and members of the Supreme Court, which have seriously threatened their lives and caused multiple human rights abuses. Along with his cooperation in anti-opposition attacks, he is suspected to be involved in multiple scandals in which more than 70 of his allies in the Colombian Congress were under criminal investigation for links to paramilitary groups and corruption.

Charges by human rights organizations against Uribe include, but are not limited to, collaboration with paramilitary groups in the “false positives” scandal, which entailed luring 3,000 or more poor young men to their deaths, posing them as guerillas fighters and paying bonuses to the soldiers responsible. His legacy also includes extensive illegal phone tapping, email interception, and surveillance of critics of his administration. Not only was Uribe a destabilizing force in the region, but under Uribe’s presidency, there was also a significant rise in extrajudicial killings of civilians, and specific targetting of labor leaders, attributed to the Colombian Army, well as millions displaced from Colombians and other bordering nations. In addition, under Uribe’s administration the Colombian government violated international humanitarian law by wrongly using the Red Cross emblem in a hostage situation.

We urge you to rethink your decision about hiring Uribe as a member of your staff, and instead insist that Uribe stand trial and undergo an investigation for the human rights abuses that took place under his presidency. Unless you believe that corruption, violence and scandals are valuable tools for your students, as the President of Georgetown University, it is imperative that you take a stance on the side of justice and denounce Uribe’s human rights violations by terminating his connection with your university. Uribe should not be honored by Georgetown’s academic prestige, but should instead pay for the crimes that he committed.

Sincerely,
Posted by mollymew at 8:59 AM