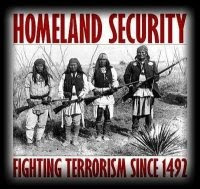 LOCAL EVENTS-WINNIPEG:
INDIGENOUS SOVEREIGNTY WEEK WINNIPEG EVENTS:
Molly is really late out the starting gate on this one, but there are at least two more days of events left in this week in support of indigenous sovereignty. Here's the announcement. Molly has mentioned some of these events before, but here they are all in one place. Please note that this list was previously posted on the local Winnipeg Wobbly Blog.
NNNNNNNNNNNN
Indigenous Sovereignty Week:

Host:
Winnipeg indigenous peoples solidarity movement - w.ipsm
Time:
Sun Oct 25 at 11:00 am until Sat Oct 31 at 4:00 pm
Venue:
downtown Winnipeg and u of m
Description
Events happening all week:
++Sunday, 25 Oct. - vegan abc brunch 11-3 Mondragon with speakers starting at noon
++Monday 26 Oct. *film 'Green Green Water,' with discussion on Hydro's violation of Aboriginal rights in N. Manitoba @ 7PM Eckhardt-Grammatte, third floor U of W
++Tuesday 27 Oct. Winnipeg Copwatch will be hosting "Start your own Copwatch"Tuesday, 5PM, Magnus Eliason Recreation Centre, Langside at S of Ellice.
*film 'The Scars of Mercury' and discussion on history of mercury poisoning of indigenous commnities @ 7PM Eckhardt-Grammatte, third floor U of W
++Wednesday 28 Oct. *panel: Urban Issues and community policing - 7:30 U of W Eckhart-Grammatt
++Thursday 29 Oct.*Film 'Finding Dawn' with presentations and discussion, 12 - 2PM Aboriginal House U of M
*Sovereign Indigenous Voices - spoken word and music - 7-11PM Urban Shaman Gallery, 203-290 McDermot Avenue
++Friday 30 Oct sovereignty expressed. decolonizing the street. email winnipeg.ipsm@gmail.com for more information or to partake in planning this unique event...
++Saturday 31 Oct Defenders of the Land: Voices of Resistance featuring four Aboriginal activists standing up to the Tar Sands, Hydroelectricity's floods and broken promises, uranium mining, and clearcut logging panel and workshops 12-4 PM, U of Winnipeg Bulman Student Centre, Spence St. doors and downstairs (*venue subject to change)...
NNNNNNNNNNN
And here's a recent update on some of the events.
NNNNNNNNNNN
Events Update for the Week...:
Hi all, as we head over to U of W for tonight's 7PM screening of Green, Green Water on Manitoba Hydro's northern history, we have these events updates:
1) Tuesday evening's film showing of 'The Scars of Mercury': Anthony Henry, Band manager of Whitedog, is attending the screening of The Scars of Mercury. Anthony represents 10 residents who are requesting their mercury data from Health Canada. The request was done in 2005 and has been ignored so for. He will be happy to join Q & A session after the screening.
2) Wednesday: NEW EVENT, afternoon: the University of Winnipeg Aboriginal Governance Program and the Politics Department are co-sponsoring a talk on Wednesday, October 28 by Rights Action activist Graham Russell who will speak about Indigenous and Community based resistance to Gold Mining in Honduras and Guatemala. The talk will take place from 12-2pm in Eckhardt Grammate Hall. Admission is free!
3) Saturday's big event at U of W's Bulman Student Ctr, 12-4, Defenders of the Land. We can confirm the following speakers: Mike Mercredi of Fort Chipewyan on the Tar Sands' impact on his community; Roberta Keesick and Judy da Silva of Grassy Narrows on the ongoing assertion of traditional land use rights in the 'whiskeyjack forest,'; Sam McKay of Kitchenuhmaykoosib Inninuwug in Ontario (of the KI 6) talking about his community's resistance of uranium exploration on their lands and the state's repressive response; and a speaker on Manitoba Hydro's ongoing legacy of destruction and division in N. Manitoba.
See you all out at these events!
Posted by mollymew at 7:52 PM No comments: 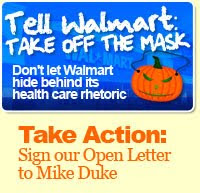 AMERICAN LABOUR:
WORKING FOR WALMART-NOW THAT'S SCARY:
This one is mostly for our American readers who live in a country where health care insurance is, if it exists at all, is at the whim (or forced and grudging agreement) of employers. Employers such as Walmart whose 'generosity' is as bone thin as a Halloween skeleton. The following from the Wake Up Walmart group is asking you to protest the grinning toothed pumpkin behind the Walmart happy face mask. Walmart, of course, is hardly restricted to the USA, and I'm sure that many of us out here in the colonies would see fit to join this protest as well.
AlAlAlAlAlAlAlAlAl
What Is Behind Walmart's Mask?:‏
Apparently, every day is Halloween at Walmart headquarters. For months, Walmart has been dressed up as a health care champion: trumpeting support for the employer mandate and running ads about how "proud" it is of its health care record. In truth, Walmart's talk simply masks the reality of its health care failures.
Behind Walmart's PR mask is something uglier and scarier than anything you will see this Halloween. Behind the mask is the harsh reality of Walmart's notion of health care: unaffordable and inadequate coverage, nearly half of its employees without company health care, and staggering amounts of workers forced onto taxpayer-subsidized programs like Medicaid.
This Halloween, we want to do something a little different. We want to take off Walmart's mask and challenge the company to live up to its own rhetoric on health care. Join us. Take action, and help us "remove Walmart's mask" in time for Halloween.
Sign our open letter to Walmart CEO Mike Duke, calling for better coverage for employees and support for real heath care reform
Walmart claims it "won't be 100% satisfied until every American has quality affordable health coverage." Meanwhile, nearly 50% of its own employees are forced to look elsewhere for health insurance.
Walmart claims it offers quality plans. Yet, an average full-time Wal-Mart employee on the least expensive family coverage plan must spend over 20% of their yearly income before the health insurance provides any reimbursement.
When it comes to health care, Walmart is still part of the problem. Help make it part of the solution. Take action today: Tell Mike Duke to change Walmart's health care rhetoric into health care reality.
Sign our open letter and "take the mask off Walmart"
Thanks for all that you do,
The Team,
WakeUpWalMart.com
AlAlAlAlAlAlAlAlAl
THE LETTER
Please go to THIS LINK to read more and send the following letter of protest to WalMart
management.
AlAlAlAlAlAlAlAlAl
Dear Mr. Duke,
You have said Walmart cares about health care coverage. You have said Walmart claims to want reform. Last year, your company made $13 billion in profits. Yet, nearly 700,000 of your workers still go without company health care. That’s wrong.
Walmart claims that costs need to be controlled, but your own plans are unaffordable for many of your employees. These high costs force approximately 13% of your employees onto state health care programs like Medicaid and SCHIP in at least 8 states where data is available.
Mr. Duke, it’s your responsibility to lead Walmart toward better health care coverage. Do the right thing, make your actions match your words: your employees deserve the quality, affordable health care coverage you claim all Americans should have.
Posted by mollymew at 7:59 PM No comments:

STEELWORKERS TAKE IT TO THE BIG APPLE:
In their quest for international support for their strike against an international corporation-Vale Inco- the United Steelworkers have expanded their solidarity efforts across the world. Germany, Brazil, Sweden, Australia, New Caledonia, you name it. Here, from the Sudbury Star, is the story of one of their recent efforts in New York City where they threw a little kink into what would have been a major PR coup on the part of Vale. The following item came to Molly's attention via the strike support site Fair Deal Now. Read on.
L!L!L!L!L!L!L!L!
Steelworkers take New York by storm:
VALE INCO STRIKE: Strikers take fight to Wall Street
Posted By CAROL MULLIGAN, THE SUDBURY STAR
Two dozen striking Steelworkers got their message out loud and clear to the financial community and others in the Big Apple on Wednesday.

Fourteen members of Sudbury's United Steelworkers Local 6500 and 10 from Local 6200 in Port Colborne made a 48-hour return road trip to New York City to spread the word about their labour dispute with Vale Inco Ltd.

Wednesday was to be Vale Day on the New York Stock Exchange and Vale officials were to ring the bell at the opening of trading. The event was cancelled due to scheduling conflict, said a Vale spokeswoman in Brazil.

But Steelworker Joe Guido and his travelling colleagues think it was the threat of them embarrassing the mining company at the NYSE that forced the postponement.

A machinist at Vale Inco's divisional shops, Guido organized the trip for members of USW's Political and Allies Committee. The Canadian strikers rallied on the steps of the Federal Building, paraded with banners along Broadway and "rode" the symbolic bull outside the stock exchange.

"We brought our message to Wall Street and it was loud and clear," said Guido on Thursday. "It was a good day."

Steelworkers were joined by American USW members, as well as members of the United Federation of Teachers. The latter union served lunch to the Canadians.

They also joined the rally, which by law required a permit for strikers to use a bullhorn. Police officers armed with automatic rifles were vigilant and have been present since the attacks of Sept. 11, 2001.

One officer told the delegation, "you make all the noise you want," said Guido.

The visitors presented another officer with the Steelworkers' tiny shovel pin, which is worn handle down during a labour dispute.

"The officer said he couldn't wear it on his uniform, but he would keep it," said Guido.

"What is he hiding from?" they asked, said Guido.

Passers-by, many clearly investors by the look of their "thousand-dollar suits," said Guido, accepted leaflets the delegation distributed. Some promised to research Steelworkers' claims Vale is seeking "significant cutbacks" that led to the strike.

"I never had a negative comment," said Guido, who also arranged a trip to Queen's Park where striking Steelworkers supported the Ontario New Democrats' call for legislation prohibiting the hiring of replacement workers during labour disputes.

But the private member's bill co-sponsored by Welland MPP Peter Kormos and Nickel Belt MPP France Gelinas did not pass second reading. Before the vote, Steelworkers were ejected from the visitors' gallery for cheering and jeering while MPPs spoke to the bill.

Guido said he and his union brothers spoke with people in New York City, including Canadian tourists who wondered what a delegation from their country was doing on Wall Street.

"A high number were appalled when we told them what Vale is doing," said Guido.

USW insists Vale Inco was seeking concessions with a settlement offer calling for a defined contribution pension to replace the defined benefit one, reductions in the nickel bonus and limits on transfers among workplaces.

Vale Inco officials call the proposals "changes" and insist they are necessary to keep the business competitive in all business cycles.

Sudbury strikers left the city Tuesday at 5:30 a. m. and returned 48 hours later. Guido said he slept for a couple of hours before attending a Thursday morning USW Local 6500 membership meeting where he gave an update on the NYSE trip.

"I told them it wasn't a walk in the park," said Guido. "They were impressed."

The New York rally was staged as similar events were held in Sudbury, Toronto and Brazil, where Vale is headquartered.

When asked to comment on the Toronto demonstration, Vale Inco spokesman Steve Ball said Steelworkers were doing "what they feel is right to help their cause.

"We consider this is really another distraction and, unfortunately, the Steelworkers seem to be more committed to these kinds of events than they are to meaningful negotiations," said Ball.
"It would be nice if some of that time and effort was directed toward getting a deal done, and that can only be achieved when they commit to sitting down with us and dealing seriously with the issues that need to be discussed at the bargaining table."
cmulligan@thesudburystar.com
Posted by mollymew at 8:31 AM No comments: 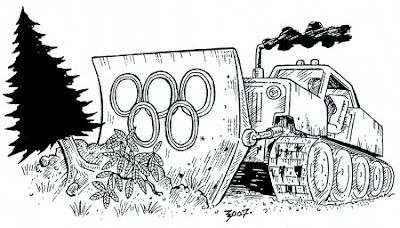