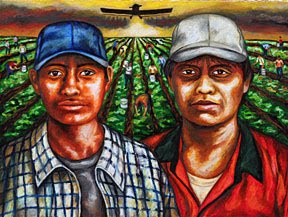 INTERNATIONAL LABOUR CHILE USA:
MORE PRESSURE ON KROGER:
Molly has reported before on this blog about the campaign on the part of the American United Farm Workers to apply on Guimarra Vineyards via its customer Kroger. The Kroger supermarket chain claims an ethical code of conduct that it expects its suppliers to adhere to. As the following from the UFW makes plain Guimarra is in violation of this code both in its American operations and also in the 'off season' grapes it obtains from Chile. Conditions for farm workers are abysmal in both countries.
FWFWFWFWFW
Natures Partner Violates Kroger's Code of Conduct in Chile Too

In its 2010 Sustainability Report, Kroger features a Code of Conduct for its vendors which specifies standards that vendors must be able to demonstrate compliance with. As we demonstrated, Giumarra Vineyards Corporation, with its Nature’s Partner label, is not in compliance.

Now we want to share that these violations don’t stop with the California fields where grapes with the Nature Partner label are produced. The kinds of abuses workers report at Giumarra Vineyards trickle down throughout the company’s supply chain. Chilean companies that provide Giumarra with the off season produce you’ll see on Kroger’s shelves, under the Nature’s Partner label, are also out of compliance with the code.

"The first thing they tell you when you arrive at the company is that you can’t complain… they say is that ‘if you fall from the ladder this year you are of no use to me to thin the vine. You are nothing because if you limp, then what use are you? You will climb the vine, it will hurt, then you will get down. If before you made 100 vines, now you will only make 60 vines and will be of no use to me.’

"Another thing is when final paychecks are issued, we are left being owed money. We’re not paid for all of our work. We’re told the accountant will look into it, but nothing ever happens, they just keep our money."

It is clear that Kroger needs to have a much more thorough system for verifying that its suppliers are actually in compliance with its Code of Conduct. And it is important that Kroger not just take these companies’ own word at face value when it comes to verification—worker testimony must be taken into account.

Take action today by clicking on the green "participate" button on the top right and tell Kroger to find out what is really going on out in the ranches that put the food on their shelves.

According to the 2010 Sustainability Report featured on Kroger's website, your company expects its vendors to uphold certain standards. Additionally, the report states that these vendors must provide actual proof of their compliance.

Consumers are becoming increasingly interested in the origins of their food and expect that their grocers are aware of who their suppliers truly are.

I am writing you today to inform you that one of your vendors, The Giumarra Companies with its Nature's Partner label, is not in compliance with your Code of Conduct. Farm workers have indicated there are serious violations both here in the US and also with suppliers who provide Chilean imports. Allegations against Giumarra/Nature's Partner include sexual harassment, wage and hour violations and more.

Because these allegations are so strong and the evidence is mounting, I ask the Kroger Corporation to conduct a very thorough investigation into this company's practices and evaluate the Kroger-Giumarra relationship based on your findings. It is not enough to take this company's word for it--workers are speaking out and we hope Kroger is ready to listen.

Sincerely,
Posted by mollymew at 7:57 PM