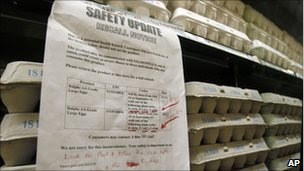 The USA is now at the tail end of the most massive egg recall in its history. As of August 20 520 million ! eggs had been recalled due to contamination with Salmonella. The FDA has a list of brands affected that the reader can access. One of the major producers DeCoster has a long history of brushes with the law in relation to food safety, and according to Yahoo News it is likely that this operation knew of Salmonella contamination in their product for at least two years prior to this events.

A lot could be said about this situation from an anarchist point of view. The first is the massive size of the product affected. Is it really to society's benefit that agribiz should be allowed to expand in such a cancerous fashion such that a problem ends of affected millions of people ? There is certainly nothing magical about small scale production that would guarantee freedom from occasional contamination, but if such a thing were to occur it would have far less of an effect. The second thing is that the system of production for profit with no barriers to gigantism inevitably leads to such monopoly concentration and also to the temptation to cut every corner that can be cut.

One such corner is workers' rights, and the chances of danger to the consumer march hand in hand with poor working conditions, as the following item from the international union federation the IUF makes plain.
EEEEEEEEEE
Record US Egg Recall Should Turn Spotlight on Working Conditions and Trade Union Rights

Over 1,500 cases of potentially fatal salmonella enteritidis poisoning across the United States have been linked to production from two interlinked giant producers. The poisonings have led to the largest-ever recall of eggs – over half a billion so far.

Critics of hyper-concentration in the agrifood industry have forcefully made the point that the record number of salmonella cases stem from the operations of just 2 giant Iowa producers - Wright County Egg, owned by Jack DeCoster, and another in which DeCoster is a major investor. DeCoster also owns the company providing feed (suspected as the source of the bacterial contamination) and chicks to the two egg farms. Eggs sourced from DeCoster are supplied under a bewildering variety of names at supermarkets and other retail outlets across the US, making the product origin impossible for consumers to trace. Information posted on a US government website lists some 90 branded eggs under the recall - 3 of them identified only as "No Brand Name Available" in various size retail packaging, with their expiration dates!

The latest tainted food episode, following on a seemingly endless series of food product recalls from meat to nuts to frozen cookie-dough, has again turned the spotlight on the federal agencies largely for food safety, the Food and Drug Administration and the US Department of Agriculture (it is the FDA which is responsible for shell eggs). DeCoster in fact has a long history of violating federal law at operations from Iowa to Maine - and past fines don't seem to have made a dent in the business model or stimulated regulatory activity. An FDA spokesperson told the New York Times on August 24 “FDA has no inspectional history with either of these facilities in Iowa."

So while many are asking where the federal regulators have been, it's time to ask what the most recent large-scale outbreak of food-borne illness tells us about working conditions and worker rights.

Recent inspections at the farms at the origin of the outbreak reported massive piles of manure under he egg-laying facilities, with maggot and rodent infestations cited among other flagrant violations of elementary hygienic standards. Wild birds were nesting in and flying around a DeCoster feed mill suspected as a source of the salmonella, whose storage and other facilities were full of holes and open to the wild. Identical strains of the salmonella bacteria were detected in water, manure, walkways and equipment at the feed and egg facilities. The FDA, according to their website, is investigating "whether equipment used to handle manure or bird carcasses is also used to handle feed."

Behind the appalling hygiene lies an appalling exploitation of workers, whose role as the guarantors of safe food can only be exercised when they can safely exercise their right to organize. Where chickens are forced to wade through rat- and maggot-infested manure heaps, so too are workers. Inadequate protective clothing at Wright Country Egg meant that workers were potentially spreading bacteria - and serving as potential vectors for the deadly H5N1 virus. should it appear.

In 1997, a DeCoster egg operation in Maine was fined USD 2 million dollars for egregious health and safety violations, In addition to bacterial contamination, government reports cited electrical hazards and unguarded machinery. In a recent blog, former Labor Secretary Robert Reich wrote that "Workers had been forced to live in trailers infested with rats and handle manure and dead chickens with their bare hands. It was an agricultural sweatshop."

In 2002, DeCoster paid USD 1.5 million to settle charges stemming from a lawsuit on behalf of Mexican women workers subjected to sexual abuse by supervisors, including rape..

For an operation like Wright Country Eggs, the fines are a trifle - part of the cost of doing business. One manager who trafficked undocumented workers between facilities for three years was confined to home for three months and fined USD 9,000. The fines are digestible, though the product may be toxic.

When strong unions, with strong health and safety committees, are absent or repressed, the result is hazardous and unsanitary conditions. The conditions which sicken and maim agricultural workers – 8 foot (2.4 meter) piles of rodent-infested manure, unguarded machinery, contaminated water and walkways - are precisely the conditions which turn egg farms into giant salmonella incubators. Denying workers effective legal protection to organize at the workplace deprives consumers of a crucial protection against food hazards.

Increasing the regulatory capacity of government to ensure safe food means securing effective rights for those who produce our food, clearing the way for workers to transform agricultural sweatshops into union shops.
Posted by mollymew at 8:54 AM