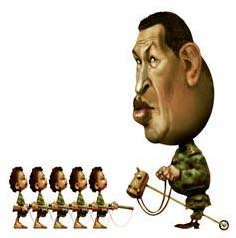 I would not trust El Libertario. For certain, we should not tail any populist or leftist government, and indeed there a lot to criticize Chavez for, but to go to the opposite extreme as they do is counter-productive. If the “Bolivarian Revolution” is neo-liberal, what they hell do we have in Canada ? This is classic sectarianism, by which a left wing opponent is deemed worse than the far right. There are other anarchists in Venezuela other than them, it would be nice to hear what they have to say. For a more balanced approach than El Libertario, though sadly rather old, see
http://www.anarkismo.net/article/839

Didn't you write that little pamphlet about Che Guevara? If so, this "critical thought" remark is a bit ironic. But more important, and superbly ironic, is an obviously sectarian attitude on your own part: "I would not trust El Libertario" ... or "I would like to add that I find El Libertario's sectarianism a danger to our movement" because ... "if we are identified with the sort of politics that equates a left wing movement with naked reaction, we will not be taken seriously by the people." Your "non-sectarian" preferance? ... "There is a middle path between simply being a cheering section for the left and rejecting them outright as the enemy."

So, apparantly (if I understand you correctly), it is more important to "not reject outright" an authoritarian leftist regime than to "be identified" with what an "extremist" anarchist paper (as though anarchism is not "extremist" in the first place!), for the god-forbidden crime of (supposedly) exaggerating, while it consistently (like any good anarchist should do) demands autonomy of popular organizations and social movements and denounces state repression -- unlike the the "left wing movement," after all, not wanting to be extremist sectarian anarchists!! That is to say, you think it much "safer" to associate with a "left wing" statist regime than with a "dangerous" anarchist paper, since that regime happens to be more "popular" at the moment.

It seems to me your denouncing of El Libertario's "sectarianism" (vis-a-vis the "left wing" State) is coverred all over in sectarianism towards "extreme" anarchists (!) simply for being blunt and, possibly, exaggerating (debatable). It is disappointing to hear you talk about a "middle path" between "dangerous extremes" in the same language that bourgeois liberals and "moderate" socialists have always used to denounce anyone who was not content to take orders from some upstart "popular" authority. I recall a similar sentiment expressed in the Che pamphlet about his observation that, when people talk about "moderation" it means they are about to betray (paraphrasing). Obviously that cannot be overgeneralized, but all the same, the long, rich and troubles history of social struggles and revolutions is full of one case-in-point after another to vindicate this remark, regardless of certain "moderate" types exclaiming otherwise. (Ironically, Cuba had a bit of its own "moderate" betrayal, specifically against the anarcho-syndicalists as "dangerous sectarians." Still, it doesn't invalidate the point -- and it's worth noting too that Chavez is a friend of Castro and devoted fan of Cuba.)

Back on topic though, from the articles I have read from El Libertario it is beyond question they cannot be treated as an anti-social, or even violent grouping and most definitely are not "sectarian" when it comes to "our movement" (since you insist you are a part of it) -- assuming by that you mean the anarchist movement -- so I see little reason to this "danger" they present. I do notice as well, that routine "exaggerations" by Chavistas, "sectarianism" against anarchists (what does "sectarian" even mean in this context?), even "extremism" against the old Accion Democratica (with whom Chavez probably has more in common than with any anarchist) -- that all these things do not provoke the same distrust or fear from you. Why? Without assuming, I will guess that it is probably for the simple reason that the Chavistas happen to be powerful and "popular" right now.

I do apologize sincerely if I am misreading or "exaggerating" your remarks, but I do not have any respect for hypocritical concerns about anarchist "extremism." Maybe it would be better if no one ever challenged "left wing" authorities, or any authorities! To do so, always, always, always is "dangerous," "sectarian" and "extreme" as far the authorities and their mass supporters are concerned. As for these consecutive sentences: "If the “Bolivarian Revolution” is neo-liberal, what they hell do we have in Canada ? This is classic sectarianism, by which a left wing opponent is deemed worse than the far right." .... Canada does indeed have neo-liberalism; but more importantly, neither in this interview nor anywhere else have I have seen El Libertario claim Chavez is "worse than the far right" -- that is plain slander. Besides which, they did not say in the interview that the "Bolivarian Revolution" is neo-liberal; they said it "covered up" a certain neo-liberal agenda (which is probably exaggerated, but not without some real evidence).

To sum it up frankly, I do not sense a serious bit of "critical thought" in your remarks, Larry, but I do smell quite a load of "sectarianism" in your "moderate" denunciations. Maybe it is worth noting too, it is not a friendly little side point, for this sort of writing-off by "non-sectarian" anarchists has served many times in the past to excuse repression and even mass murder by "not-so-bad" leftists of comrades who had a little more integ