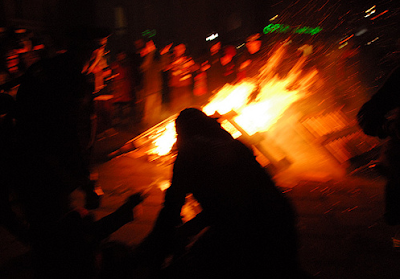 While the new social democratic/leftist government of Iceland marks time, attempting to prove that it can do better than the previous conservative government at saving Iceland's economy (a questionable proposition), the invigorated Icelandic anarchist movement continues with the tradition of protest that recent events in that country have given birth to. The following is a recent report from the English language section of the Icelandic anarchist site Aftaka.

Lighting fires, hitting pots and pans, putting on loud music and dancing is a continuation of the January uprising. Until the banks collapsed last October Icelandic protests were pitiful. The authorities orders for peaceful protests were so thoroughly ingrained into the Icelandic people that nothing was allowed. The protests signs were polite as were the speeches(Molly has to interject here. She has a vision. A protest sign that reads "Die Scum Sucking Government Dogs! Please and Thank You!), but these two things – signs and speeches – were the only weapons the resistance was allowed to use, if you can even call it resistance. The so called radicals got satisfaction from discussing the NATO fight in 1949 but did not dream of anything like that happening again.


This is why the enslaved nation foamed at the mouth in 2005 when the people from Saving Iceland (a direct action environmental campaign) took to the mountains, locked themselves to machinery, climbed up into cranes and stormed offices of companies that were connected to the building of the big, ugly and terribly destructive Kárahnjúkar dam. People had never witnessed behavior like this and did not even know it existed; the history of international resistance and practices were a closed book. This was why it was considered news worthy when there was a possibility that some of those that showed physical resistance at Kárahnjúkar had also been at the annual G8 protests.


But now Icelanders are learning, they have gotten to know fire, noise, disobedience and real opposition.


In July 2007 Saving Iceland organized a street party called Rave Against the Machine - Street Party Against Heavy Industry. The group walked from Perlan (a fancy tourist center) and down a heavy traffic street called Snorrabraut, dancing to the music of the resistance. Emma Goldman´s famous words “If I can’t dance, it’s not my revolution” were a guiding light. In there crazed dance against complete heavy industrialization of Iceland the group towards Laugavegur (Reykjavík’s main shopping street) when the police took up positions in front of the group and held the group there for two hours, not having the slightest idea what they were supposed to do. Finally they decided to arrest a few people, a decision that led to physical conflict between police and protesters - the first political physical struggle in Iceland for a very long time.

Actions like these are very similar to the older international tradition which goes by the name Reclaim the Streets, which focuses on taking over public spaces for parties, protests or better: both. Notice the word public spaces. That is what they are called, open spaces within the city but they are not more public than so, that you need permission from the authorities to use them. Reclaiming the streets (or in our case claiming them as they have never been ours) is part of battle for a society organized by the people, themselves, a society free from a pyramid shaped division of authority. Taking over the streets is part of the freeing of each and every person from the yoke of the authorities.


Last Saturday history repeated itself. Word spread online that there was to be a street party at Lækjartorg square on Saturday evening and the reason given was the police attempts to silence the protesters at the central bank during the previous week. As is well known in Iceland the police have been handing out fliers with laws regarding the amplification of sound, playing instruments and noise in public areas. An air pressure powered horn was taken into custody and put on probation. With this the police was attempting to finally silence the newly born resistance.


At 10 pm people gathered at Lækjartorg, lit a fire, listened to music and had some fun. Shortly later the police and the fire department arrived to put out the fire of the revolution. They succeeded and an unlucky city worker had to collect the remains of the fire. When the city worker was just about to drive off some people ran to the truck and dragged off a pallet to set alight again. The 2 police men who were still there went to the people who decided to protect the pallet by standing on it. It was painfully funny to see the 2 policemen try to drag the pallet from underneath 20 people who stood on it and refused to move.

The music was put on full blast and shortly later there was another even better fire. The two policemen tried desperately to get to the fire, drag the pallets away and put it out… without success. The party goers were very determined not to let the police ruin the fun and the resistance, people defended the fire with passion. Slowly more police men joined the ones already there and started tearing at peoples hair, beating people with batons but at the same time more people had also arrived. The peoples unity was fantastic (at least better than ever before in Iceland) and it is certain that several arrests were prevented by physical battle with the police.


Finally, aided by a wall of dozens of police officers – the fire department managed to put out the fire but the people enthusiastically responded.


The song carried around central Reykjavik and continued:


The noise continued and got greater when the police grabbed peoples sound system in a failed attempt to stop the music. People gathered around the police car and prevented it from driving away with the sound system. The driver then decided to drive into those that where standing in front of it. At that point the army of police had re-appeared with there batons and an ambulance was waiting across the street.


After some conflict, beatings and threats of arresting everyone wearing masks the police officers legged it but with two persons in tow. One had stood in front of the police car and the other committed no other offense than being at the party. They were released after 12 hours at the police station.


The nights message was that the revolution is not over, it is just beginning. The authorities will not be able to silence the people’s resistance with force and abuse of power. People will continue their opposition with more focused actions, by taking over the streets and turning them to self controlled areas, free from the authorities interference and oppression. Actions are here to stay.

I really have to add a postscript. This whole scenario takes me way back to 1969. At the time we were having our own "riots" in the city where I lived at the time. Poor little Molly was one of 8 people arrested during one incident. None of the 8 (myself included), by the way, were participants in the "riot". I got nailed by a police blackjack on the back of the head while "trying to be in place where I could be guilty". In other words innocent as fresh fallen snow. Long story.


What was relevant to this sort of thing today was a meeting that I attended after the events. There were basically two sides in the meeting. the young folks were gung-ho on "The Revolution" and believed that going back to fight the cops was the very same thing as "The Revolution". I might mention that the riots of that day were usually proportionately stronger than what we see today, not just in Iceland but in other countries that are presently being mythologized. The old folks, most of whom are probably long dead by now, knew better. They had a clear idea of what revolution actually meant.


So...no matter how much I may admire the spirit of the Icelandic anarchists I have to say the following words of caution. There is a certain ideological trend in anarchism(most prominently expressed in the USA) today that is very much in favour of keeping younger anarchists in a state of "perpetual childhood". For their own reasons they want people to believe that streets fights against the police, almost always losing battles except for a few minor ego-boo points, are "The Revolution". For their own reasons they are lying through their teeth.


In a real revolution street battles are, at best, a trigger. They may actually never occur. An actual revolution involves the rapid replacement of one social and economic order by another. Revolutions, especially libertarian ones, are made in the workplace and the neighbourhoods in assembly. They presuppose not just rejection of the present order (in its totality and not just "the police") but also a vision of how society could be ordered differently. A vision hopefully shared by a majority of the population but at least carried by a large minority with the passive acquiescence of the majority.


A revolution is a much more serious and widespread matter than fighting police. It requires an understanding of, sympathy for and the willingness to help the general population to recover their traditions and use them to create a new socioeconomic order. It certainly says that one shouldn't have contempt for the ordinary person. These people are the real "revolutionaries", those who will actually do revolution, something that is quite different from confronting the police. In a revolutionary situation the police basically become irrelevant. At best they desert to the die of the people.


A revolution demands at least a somewhat coherent plan as to how society can run in a different way. It is a matter of organization and long term propagation of this idea amongst ordinary people who will inevitably outdo the plans of the revolutionists by their actions and organization. So...I hate to say this but "The Revolution" is still a very long way off. By all means keep up the ferment, but recognize the long term task as well. If the social democrats and the leftists fail, as they are likely to do, it is incumbent upon anarchists to at least have a sketchy plan that might be better than what the governmentalists have. It is even more important to begin now to build the sort of anarchist organization that can outlive the present crisis and be an inspiration for generations yet to come.


It is a joy to me to see the growth of anarchism in such an unlikely country as Iceland. It would, however, make me even happier to see something lasting built.
Posted by mollymew at 5:39 PM

Well said, your comments. Couldn't agree more. The fact that the riot-on types are very much less prominent now than the organized anarchists bodes well for places like Iceland, however. They are in a dead serious situation there and will need to come up with alternatives. Do we really think the soc dems can provide that? Doubt it. And I suspect at least some anarchists are aware of the situation. And rioting is not constructing an alternative.