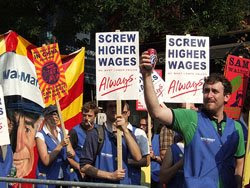 AMERICAN LABOUR:
PROFITING FROM THE RECESSION:
Times are hard. On the news today both GM and Chrysler are angling for yet more government bailout money. One company, however, keeps on profiting-Wal-Mart. How you may ask ? That's what the following from the AFL-CIO Blog hopes to make clear and in the process adds a new phrase to the language-'recession profiteer".
...........................
WAL-MART:RECESSION PROFITEER:
Bank and insurance CEOs aren’t the only ones getting rewarded for horrendous behavior in this recession. There’s Wal-Mart, whom Newsweek now has anointed as “Our Corporate Savior.” (Hat tip to dakine01.)
“Wal-Mart recently announced that its same store sales in January were up 2.1 percent, which was more than forecast. With the company’s huge network of stores and ability to strong-arm suppliers, Wal-Mart offers shoppers good merchandise at prices which becomes more and more attractive as the downturn continues.”
The brutal truth is that Wal-Mart is profiting in the midst of misery because of policies that, like those of the financial services industry, fueled the nation’s economic disaster. While banks rolled up and peddled collateralized debt packages like cheap tuna wraps, Wal-Mart’s assault on America’s economy came from another angle–everyday low wages. By paying the vast majority of its workers little more than the minimum wage and offering health care plans most can’t afford, Wal-Mart shifted its corporate expenses to taxpayers.
So, two things happened: Workers sunk into debt—mortgages, tuition loans, credit cards—unable to support families on such low wages, and states were force to channel precious resources to full-time workers whose employer should have paid them enough to afford private health care. Now with state budgets collapsing, 1 million people are expected to lose state-funded health care—many of them, undoubtedly, Wal-Mart workers.
An AFL-CIO study from a few years back found that in 19 of 23 states surveyed, Wal-Mart topped the list of employers pushing workers into state-provided health care programs. In Georgia in 2002, for instance, the Department of Community Health found that 10,261 kids (6.2 percent of all Georgia children who participated in PeachCare, the state’s health care program for low-income children) had parents working for Wal-Mart. PeachCare coverage for children of Wal-Mart employees costs state taxpayers an estimated $6.6 million per year.
But Wal-Mart has had more than one way to soak up taxpayer money.
The study found that Wal-Mart also wrung at least $1 billion in economic development assistance from state and local governments over the past 20 years.
A list of wage abuses (never mind gender discrimination, health and safety violations and so on) filed against Wal-Mart is not possible to compile in one place. Here are just a handful provided by Wake Up Wal-Mart:

*In December 2005, a California court ordered Wal-Mart to pay $172 million in
damages for failing to provide meal breaks to nearly 116,000 hourly workers ,as
required under state law. Wal-Mart appealed the case.
*Wal-Mart’s 2006
Annual Report showed that the company faced 57 wage and hour lawsuits. Major
lawsuits have either been won or are working their way through the legal process
in states such as California, Indiana, Minnesota, Oregon, Pennsylvania and
Washington.
*In March 2005, Wal-Mart agreed to pay $11 million to settle
allegations that it had failed to pay overtime to janitors, many of whom worked
seven nights a week.

Meanwhile, now former Wal-Mart CEO Lee Scott in 2008 made a cool $30 million in total compensation.
Wal-Mart in recent months has bought its way to a better media image with high-profile charitable donations and moves to “green up” its products. But we shouldn’t let the smoke and mirrors fog our memory of how the corporation treats its workers—and how their low wages affect us all.
After cleverly getting taxpayers to fund its bottom line, and paying workers wages so low many are mired in debt, Wal-Mart now is the only place where many of America’s workers can afford to shop.
But apparently, they can’t afford much. Wal-Mart announced last week it is joining the long list of corporations laying off workers.
Our Corporate Savior.
This is a crosspost from Firedoglake.
Posted by mollymew at 6:26 PM