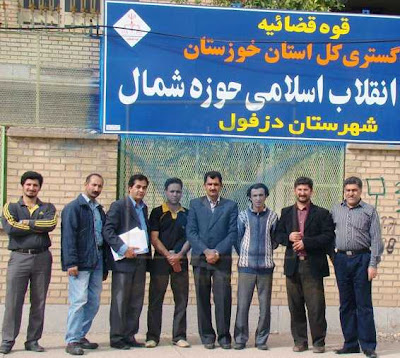 The case of five Iranian sugar worker activists, summoned to a kangaroo court for their legitimate union activities, was mentioned a few days ago here at Molly's Blog. Here's an update on the case from the IUF and a call for further solidarity.


The verdict against Ali Nejati, Feridoun Nikoufard, Mohammed Heydari Mehr, Ghorban Alipour and Jalil Ahmadi were scheduled to be delivered on 17 February but was forced to be delayed after the defendants and the lawyer demanded the presence of the plaintiff who did not even bother to make his appearance before the judge that day. Nor was there any serious "evidence", they argued successfully.


After this session, another Executive Board member of the union, Rahim Beshag, was arrested on 22 February by the secret police and taken into the custody. His charges are not known. This is a part of the on-going attack by the authorities to crack-down the union activities at Haft Tapeh. Today, the Ministry of Labour pushed for an election of Islamic Labour Council at the factory. Much to their dissatisfaction, a small minority of the workers took part in the voting.


The IUF and the unions around the world have been supporting the Haft Tapeh workers union and this court case over the past few weeks. Upon hearing this brave news of the defendants challenging the Revolutionary Court procedure, they stepped-up their campaign by organising mass protest mails to the Iranian leadership. More than 8,000 people have accessed to the online protest sites set by the IUF and LabourStart in less than a week. Mailing lists by the ITF and Amnesty International were used to support the campaign.


In the past, the court has "issued" verdicts in other cases involving the leaders of independent workers' movement such as Mansour Osanloo but have often failed to produce anything in writing. In some cases, it has taken a few months for the verdict to be delivered.


IUF members stand ready to support our members in Iran and we will provide updated information as this case progresses.
Posted by mollymew at 9:52 PM