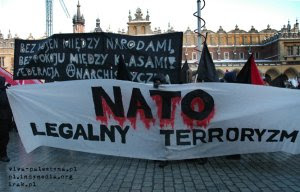 INTERNATIONAL ANARCHIST MOVEMENT-POLAND:
ANTI-NATO DEMONSTRATION IN KRAKOW:
Yesterday and the day before NATO held an informal meeting in the Polish city of Krakow(see previously on this blog). Several hundred people gathered to protest NATO and its policies. Here is a report from the English language section of the Polish anarchist news site Centrum Informacji Anarchistycznej.
,,,,,,,,,,,,,,,,,,,,,,,,,,,
Anti-Nato Demonstration and Conference in Krakow:
On the 18-20 of February there was an informal meeting of defense ministers from NATO countries in Krakow. Anarchists prepared protest activities during that time.

On 18 of February there were anti-militarist films. The main events, a demo and counterball, were held on Feb. 19. A few hundred people demonstrated against NATO, mostly anarchists. They had slogans such as "The government to the front" "No war but class war" and "NATO - legal terrorists".

The situation was very tense since the city was like a police state. The cops were checking people at the borders, even though there weren't more than an handful of people from other countries there. Before the demo, the sound truck was stopped and police were stopping people and checking their bags. One guy who did not answer a call to go to the police in relation to the Nov. 11 demo in Warsaw was arrested as was somebody with a flare.
(Ironically, protesting police demonstrated in Krakow and Gdansk that day and they threw firecrackers. So only police are allowed to use "illegal" pyrotechnics.)
During the demo there were some speeches and a march to the location of the NATO meeting, although police tried to block this, people eventually got through.
In the evening there was a counterball across from the venue of the NATO ball. There was a much smaller crowd since most people left after the demo - a shame since the next day also had some events. The ball was however hard to notice because three times as many cops than anarchists surrounded it and blocked the view. It was extremely difficult to get to - basically it was only possible if you were a single person who managed to slide pass the cops. Afterwards, when everybody was going home, the police started harassing people again and arrested somebody for having a stick. At least a dozen people had sticks since people had flags with them, but this guy took his flag off, which apparently made the stick a weapon.
The next day there was a modest conference on NATO, militarism and responses to it. There were films, presentations and talks made by the Anarchist Federation Krakow and ZSP. There was also a guest from the Anarchist Federation of France who invited people to attend the anti-NATO demos in Strasbourg at the beginning of April.
More information on that can be found on the Dissent! page: http://www.dissent.fr/
Videos from Krakow: http://cia.bzzz.net/wideo_z_demonstracji_antynato
Photos: http://cia.bzzz.net/fotki_z_antyszczytu
,,,,,,,,,,,,,,,,,,,,,,,,,,,,,
Here's another report on the demo from the A-Infos site. A note in passing-the Polish union movement is incredibly fractured and actually quite weak. The three main federations NSZZ Solidarnosc, OPZZ and FZZ together have only about 1.9 million members. There are another 200,000 nationwide in various local unions and smaller federations of which the 'August80' (Sierpien80) is one. Besides not representing a large percentage of the workforce (97% of workplaces have no union) the fragmentation means that there may be over 17 unions in a given workplace. It seems the Poles have outfrenched the French in this regard.
,,,,,,,,,,,,,,,,,,,,,,,,,,,,,
Anarchists, trade unionists host anti-NATO summit:
Warsaw - Some 300 people held a largely peaceful anti-NATO protest in Krakow's main square as the alliance's defence ministers met in the southern Polish city.
--- The protests were organized by the Stop War Initiative, the August 80 trade union and the Anarchist Federation, as reported by the Polish Press Agency PAP.
--- 'We're against NATO's politics, and we demand pulling out forces from Afghanistan and a halt to the arms race,' protester Katarzyna Puzon told PAP. 'We find it equally absurd to be spending public money in the times of crisis.'
--- Demonstrators held signs saying, 'Stop NATO. Stop War,' and 'We don't want to be America's shield.' The crowd included Czechs who came to oppose a US anti-missile shield, which would be based in Poland and the Czech Republic, based on current proposals.
'Europe should play a role as guardian of democracy and peace in the world and not export war,' said Graziella Mascia of the European Left political party. 'Events in Iraq and Afghanistan prove that the politics of war don't pay off.'
Defence Minister Bogdan Klich said he thought protesters were voicing minority opinions, because it was 'hard to believe' Poles want to 'back out of international responsibilities, which in reality decide our security.
'Organizers are planning a slew of events for the 'NATO anti- summit,' reported PAP, including panel discussions, concerts and film showings.
A founding member of the Cold Era Warsaw Pact, Poland joined NATO along with Hungary and the Czech Republic on March 12, 1999, about 10 years after shedding its communist past.
,,,,,,,,,,,,,,,,,,,,,,,,,,,,,
Not everyone who participated in the demo was pleased with all the results, as the following, also from the A-Infos makes plain. There is also quite a lively debate following the article in Polish at the Centrum site. You can at least get a sense of it from a machine translation. The problem discussed below is a persistent one, but it is becoming less and less important as the anarchist movement grows and leftist sects shrink. Leninism only awaits the coroner these days to be declared officially dead. Social democratic reformulations, however, are a different matter entirely, and they still have a lot of life left in them in pretty well all countries.
,,,,,,,,,,,,,,,,,,,,,,,,,,,,
Poland, About anti-NATO in Krakow:
About 500 people came to protest against the informal NATO summit in Krakow on Feb. 19 organized mainly by the Anarchist Federation Krakow. There was an extremely heavy police presence and some problems with arrests and attempts by the police to block the demo, but in the end people protested across the city. In addition to local activists, a guest from France and the Czech republic spoke. In the evening a smaller group of people made their way to the location of the ball/banquet of the NATO bastards and had a counterball.
After the ball, again the police were acting up, surrounding people and searching them. One person was arrested but later released.
The next day there was a conference. There were talks and presentations by members of FA Krakow, ZSP and from AF from France who invited people to the anti-NATO protests in Strasbourg.
There are a couple of videos here:
http://cia.bzzz.net/wide 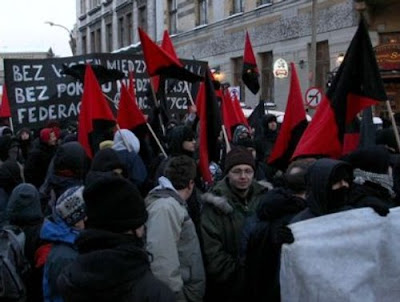 o_z_demonstracji_antynato
photos: http://cia.bzzz.net/fotki_z_antyszczytu
Criticism of leftists:
There was some controversy in the weeks before the demo about inviting August 80 to co-organize or not. The leadership of the union also have a political party and the people from the union at demos are usually not rank and file activists, but professional unionists, who are often also party members. Usually it just looks that way that the leader gets people out of work, puts them on the bus using union funds, and gives them a flag to hold during the demo. There was a discussion with FA Krakow about what percent of party flags they should have in proportion to union flags before agreeing to co-organize with them. The main argument for this cooperation and allowing the party to come with their flags was that the union boss promised to bring 1000 people with him to the demo.
Nobody knows why some anarchists want to believe politicians. As some people predicted, only 100 of them showed up. Besides that, they invited, without previous discussion with the anarchists, the Stop War Initiative to be a co-organizer. FA Krakow at that time proposed to make a separate anarchist demo but the Anarchist Federation voted against this. Members of ZSP agreed with the idea not to have the politicians.
In the end, the party/union only dragged 100 people to Krakow. Anarchists were at least 300 of the 500 people. At least the Stop War Initiative made and put up posters and helped with information. In addition to the party/union, the careerist Young Socialists showed up and immediately started demanding that their left party sponsors from abroad be given the speakers' platform and complained when they were not allowed to dominate the whole event.
Nothing good of the leftist presence, they just were waving their flags and trying to promote themselves and their social democratic shit - but some anarchists like them. In general the anarchists could have done everything themselves with no lose of quality and a clearer message. Not that I think non-anarchist shouldn't participate, but the party and party wannabe leftists suck.
Posted by mollymew at 3:10 PM