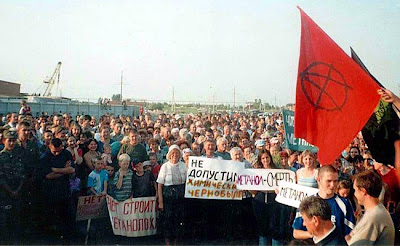 INTERNATIONAL ANARCHIST MOVEMENT-RUSSIA:
ECOLOGICAL PROTEST IN RUSSIA MOVIE:
The following is an announcement from the English language section of the Russian anarchist news site Avtonom. The following has been slightly edited for English grammar.
.........................
Unique movie on radical ecological protest in Russia available as a torrent:
No Pasaran!
Director, producer, researcher and cinematographer: Vadim Likhachyov
Length: 73 min.
Russia, 2006
The movie "No Pasaran!" documents environmental protest campaign in the city of Azov, Russia in the summer of 2003. Inhabitants of Azov, together with activists and anarchists of Autonomous Action and Rainbow Keepers, defended their right to a clean environment and fought against construction of a methanol shipping terminal in their home town.
After fall of the Soviet Union, there has been a huge pressure for development in the Black Sea rim, and environmental activists have had hard times attempting to protect what is remaining. Most of the protest campaigns in the area have been failures, but the Azov campaign, the peak of which was in 2003, was a success - eventually the methanol shipping terminal, which was already almost finished by then, was redesigned to be used for export of less dangerous goods. This was mostly due to mass popular protests, which managed to mount demonstrations of big as 7000 people in a city of 90 000.
This is a documentary of the protests in summer of 2003, which lasted for two months. Radical protests (road blockades and demonstrations), mobilization of people, life in the protest camp and relations between activists and local inhabitants are documented.
You may download the torrent from
http://onebigtorrent.org/torrents/4584/No-Pasaran
Please see it and pass this message! The torrent is 4GB and includes plenty of additional material, such as photos of the protest and the MA thesis of Vadim Likhachyov in the English language on social antropology, "Equality in a radical environmental protest: pragmatism or imposed ideology? Two cases of protest campaigns in the South of Russia". The thesis is also separately available from the Autonomous Action website: http://avtonom.org/files/lib/ligachev.pdf
Posted by mollymew at 7:35 PM