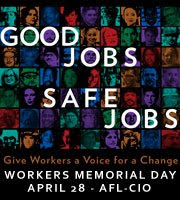 INTERNATIONAL LABOUR:
MATERIALS FOR WORKERS' MEMORIAL DAY:
Worker's Memorial Day (April 28) is fast approaching. This is a day set aside for the memory of the myriad of workers killed and injured on the job. Molly has blogged on this day both in 2007 and in 2008 (see our archives), and I will undoubtedly do so again this year. But, until then, here's a little early bird announcement from the AFL-CIO Blog about what they are doing to commemorate this day. Workers' memorial day, by the way, is a Canadian contribution to the world. It was first initiated in 1984 by the Canadian Union of Public Employees (CUPE), and the next year the Canadian labour Congress took up the idea. See the link above for other details.
,,,,,,,,,,,,,,,,,,,,,,,,,,,,

For many of America’s workers, going to work can literally be deadly. The most recent edition of the AFL-CIO’s annual Death on the Job: The Toll of Neglect shows that an average of 15 workers a day were killed on the job and each day, another 11,000 workers were injured or made ill in 2007. Overall in 2007 (the latest figures available), 5,488 workers died from workplace injuries and 4.0 million were hurt or made sick by their jobs.

On April 28, to honor those killed and injured on the job and to call for improved workplace safety, workers in the United States and around the world will mark Workers Memorial Day. The theme of this is “Good Jobs. Safe Jobs. Give Workers a Voice for a Change.”
You can start planning and organizing a Workers Memorial Day event in your workplace or community with materials now available online from the AFL-CIO. The materials include:

The 2009 edition of Death on the Job, set for release in April, will examine workplace death, injuries and illness by occupation, state and cause. It will analyze trends and examine the federal government’s track record on developing workplace safety standards. It also will look at the enforcement—or lack of it—of current safety laws by the Occupational Safety and Health Administration (OSHA) and the Mine Safety and Health Administration (MSHA).

The AFL-CIO Workers Memorial Day online tools include links to a collection of workers’ memorials in the United States and around the world and poems and other tributes to workers killed on the job.

The first Workers Memorial Day was observed in 1989. April 28 was chosen because it is the anniversary of the creation of OSHA in 1971 and the day of a similar remembrance in Canada.(As I said above the day actually originated in Canada-Molly) Trade unionists around the world mark April 28 as an International Day of Mourning for workers killed.

Click here to read how health and safety experts from the labor, scientific and academic fields say OSHA can be rebuilt after the Bush administration spent eight years tearing down the safety agency.
Posted by mollymew at 10:00 PM

Molly do you know Faye Campeau? she is Canada and is pulling together a group to help change the laws and honor those killed on the job. she is already active and will be attending an event you your area.

If you would like her info shot me an email and i will send it.

Hi Tammy, I'll try to send the email tonight, and YES I am interested. I hope it goes through. In the meantime I recommend Tammy's website "United Support & Memorial for Workplace fatalities" http://www.usmwf.org .
Molly