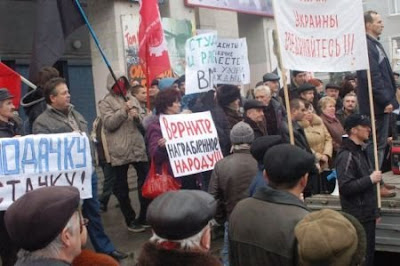 INTERNATIONAL LABOUR-UKRAINE:
REPORT FROM THE DEMONSTRATION IN KHERSON:
The following is a Google translation of an article from the Ukrainian anarchist news site Zaraz. I have edited it for English grammar. The report is from some Crimean anarchists who participated in last Saturday's demonstration in Kherson in solidarity with the workers occupying the Kherson farm machinery plant (see previously here at Molly's Blog).
............................
Workers of the Kherson engineering plant held a rally.
Report by anarchists from Simferopol.:
Throughout the night before the rally we did banners and a variety of posters and an action plan for the next rally. By the morning we made some 15 posters with the slogans - «The workers and students together», «Kherson Today and tomorrow the whole Ukraine», «One solution - the resistance», «Workshop: Plant, wages, worker control», «Revolution NOW» etc., and one big banner - «Do not give up, keep up the strike».

In the morning at 10 o'clock we met a fellow from Kiev and immediately headed for the seized plant, which is approximately 5 minutes walk from the station. We divided work previously prepared for us in terms of posters. We were a bit surprised by the lack of peparation of the workers in the campaign plan (on their part very few posters were done and few flyers were made to hand out passers-by, etc.) While awaiting the start of the meeting, we chatted with the workers, and they were genuinely pleased that we came, the more so as in Kherson the «new generation» has reacted to all that has happened. Having something like this very important event Ukrainian activists, anarchists should have come... and it is, it is a pity that in such a relatively discontented country like Ukraine, only a few people came.

At 11:00 with the deployment of flags and posters, along with the workers we went to the building Oblgosadministatsii chanting various slogans on the road. On the road workers and bystanders repeatedly asked why we had the nlack flag. Some were openly hostile, some after the «explanatory work» were satisfied. There was even one woman, who tried to expel one of our activists from the demonstration, yelling «we do not need any anarchists, we are in this for ourselves; we do not need any party». Of course, this kind of aspiration of working towards independence made us happy, but it was funny to hear, because just ahead PSPU flags and CPU flew. At the meeting, we listened to the speeches of a great number of Lords and party functionaries, rather than mates. It was frankly a little boring and depressing. Party functionaries only remember the Soviet past: how wonderful it was, what salary, what benefits, and most importantly - factories owned by the state. Of course, then in respect of workers and their rights things may have been somewhat better. But let's look back in history: workers were not interested in labor, because it did not pay too much, compared to how much they had to work. There was no enthusiasm in the work - it was a lot like a bad marriage - working then felt like no strain because the money was in a lot of theft in the workplace. Workers considered their property, and partly it was just. In general, the system, despite some advantages, was rotten. Moreover, it does not depend on what government led the state. It was directly dependent on the state. The state, as well as a private owner is an exploiter and cares about the workers only insofar as it benefits them. Given that there must be an owner it can be concluded that the State treats the workers a little better than a private owner. but they only care about their credibility, their profits and legitimacy. Therefore, we think, it would work better to achieve socialization and not nationalization of the factory, but the question is: Are they ready for this? . «The liberation of the workers is the work of the workersthemslves »; the workers should keep this in mind: and not trust their lives and working conditions to a bourgeois or the state. We sincerely hope that they will not llisten to the promises of parties who need glasses, and be his electorate at the next election.

Thanks for this. I planned to translated on my own but you saved a lot of effort. I corrected some misunderstandings which were due to autotranslation and put it up to http://avtonom.org/index.php?nid=2262
hopefully not too many grammar errors added.

Thanks also for promoting Azov movie. Check up this movie as well:
http://onebigtorrent.org/torrents/4583/Antifascist-Voice

Can you contact the Waterford workers and create soli\darity? The world is aware of them, but so few sources have reported on the Kherson Sit down strike!