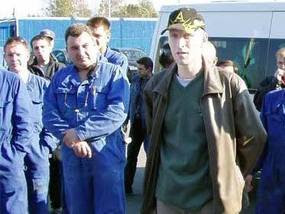 INTERNATIONAL LABOUR-UKRAINE:
KHERSON MACHINERY PLANT WORKERS TO THE WORKERS OF UKRAINE:
The following is a machine translation of a statement published at the Livasprava Blog. I have slightly edited it for reasons of English grammar. What it is is the statement of the workers at the Kherson Machinery Plant, now under workers' occupation, to their fellow workers in Ukraine. Very inspiring, whatever quibbles I may have with it.
.............................
Kherson Machiney Plant:
Workers of Ukraine!
The deeper Ukraine plunged into economic crisis, the more obvious it becomes that the authorities and big business have only one recipe for it. They are trying to shift all of its gravity on the shoulders of workers, the elderly and youth.
The growing prices of food and essential goods and the rising rates for housing and communal services, the uncontrollably rising prices of public transport, and the fact that medicines and medical care are becoming less and less affordable.
Rather than provide effective assistance to laid-off and unemployed people, officials and capitalists think only about how to enumerate them lately. Rather than do everything to preserve existing and create new jobs, the officials and owners of businesses behind the crisis, pushed workers into the street.
As a result of these policies the Kherson machinery factory faced a critical situation: the production was stopped, the salaries were not paid, and the company stopped all payments to the budget and the Pension Fund. Neither the owner nor the current government are taking any steps to revive the plant.
Under these conditions, the labor collective has decided not to give up and came together to fight for the interests of human labor. At this difficult crossroads we took decisive action: had a tough administration demonstration , captured and protected the plant against theft of finished products and equipment,and we are fighting for the truth about our struggle.
We demanded from the Government of Ukraine nationalization under the control of the working staff. We demanded the confiscation of the bank accounts of the owner of the plant, and the repayment of debts on wages, as well as payments to the budget and pension fund. We require the state to ensure the government orders and marketing of the plant products. We demanded repayment of debts on wages for all workers in the city of Kherson and full employment in the city and region.
We understand that we can achieve our demands only with the support of workers of other enterprises and institutions.(NB-Molly) Working groups of enterprises throughout Ukraine should join efforts and support each other in the fight. We should not hope for assistance in power of political parties, (Double NB-Molly)we depend first and foremost on ourselves and our fellow workers. They have proved that they care deeply about the interests of workers .
The interests of workers can only be defended by the workers themselves!
We offer to coordinate our efforts, creating the Coordination Committee of struggling teams in Ukraine. . This committee shall nominate a joint claim on behalf of workers in Ukraine and to coordinate joint actions to implement these requirements.
We propose to put forward the following demands:

* No cuts! Workers should not pay for the mistakes of the owners
of factories and the authorities!
*No bankruptcies and closures!
* Nationalization of strategic factories and enterprises under the
control of labor! In the first place where the owners cut jobs refuse to
pay wages and destroy production.
*The confiscation of the bank accounts of owners of factories, and
repayment of debts on wages, as well as payments to the budgets and pension
funds.
*Public provision of state orders and sales of products produced by
factories. The state has had a multi-bank support; we demand that public
funds not be parasitic financial structures, but provide jobs and
support real production.
*Repayment of debts on wages for all workers in Ukraine, raising
wages to a decent standard, indexing according to inflation!
* Full employment in the country!

We call on workers of all enterprises in Ukraine to jointly fight for the interests of employees, labor veterans(pensioners-Molly) and students! Create works councils and fighting trade unions . Together we will achieve victory.
Working Kherson engineering factory
(telephone: 80501304218, E-mail: solydarity.ksmz@gmail.com)
The Action Group for the establishment of the Coordination of struggling teams Ukraine (telephone: 8 063 2336226, 8 067 5033292, 8 091 1140176, E-mail: rabochiy_komitet@googlegroups.com )
.........................
MOLLY NOTES:
The factory in question is a producer of agricultural machinery, especially combines. Recently orders have dried up as farmers face their own economic crisis. It is understandable that the workers in the factory see the only source of marketing and of credit as the government. This is especially true in a country such as Ukraine where there is basically no credit union system. It is also especially true in times such as these which have a severe restriction on credit.
At other times and places such as with the factory takeovers in Argentina or the 'Strike Bike' factory occupation in Germany in 2007 it was possible for the workers to, with assistance, set up alternative marketing systems without state largesse. This would actually be possible even today in the case of the Irish Waterford Crystal factory occupation. What makes this situation unique are two things. One is that the market for the factory products is probably entirely domestic, and the situation has developed in a country which has been dramatically affected by the present credit crunch. The other is that a combine is not a piece of glassware. It is a BFM (Big Fucking Machine) with a BFP (Big Fucking Price) attached to it. In Ukraine today only the state has the financial resources to underwrite production and purchases of such a thing.
All that being said the workers of Kherson seem to demonstrate a healthy distrust of the state machinery and of the political parties which hope to capture it. Whatever the ideological inspiration of individual militants at the plant the positions that are being hammered out in the struggle are going far beyond any state socialist nostrums. The people at the plant realize that their struggle will be defeated if it remains isolated, and they, therefore, are trying to generalize what they are doing to the entire country of Ukraine.
Is this a forelorn hope ? Can the State be backed into a corner by more widespread examples of what is happening in Kherson ? The flip answer that Molly could give is- "I don't know. I'm not Ukrainian. I'm on the other side of the world. Maybe yes and maybe no.". That, however is far too flip. According to a recent news item that I have read about 1/3rd of Ukrainians are "willing to engage in mass protest at this time". With a trigger such as the Kherson workers are attempting to provide 1/3rd can easily become 2/3rds in a matter of days. If the State doesn't respond in an adequate manner what are plans B,C and D ?
What I can say is that the Kherson workers have presented the most advanced program so far seen in the protests over the economic situation in Europe. It is far more advanced than that advocated by too many anarchists who think that the equation "riot=revolution" is all that there is to said on the subject. The creation of workers' councils is an obviously necessary step on teh road to a truly just and egalitarian society. What the workers in Kherson are doing demands close attention from all anarchists and libertarian socialists worldwide. Yes, "workers control" has a variety of meanings. Yes, it is incompatible with "nationalization". Such a thing is the old "dual power", and one side or the other eventually will win. Either the enterprises will be controlled by state employed managers or they will be controlled by the workers themselves. Still...the idea of workers' councils advocated "self-management" is a considerable step up from aimless protest or the belief that a mere change in government can solve all the problems.
For those who are somewhat conversant with the situation in Ukraine I offer the following information. The city of Kherson is a declining port city on the Dnieper River and the Black Sea. It has been shrinking in population since the 1980s (present population about 329,000). If you think this is a replay of the Russians with communist sympathies versus the Ukrainians you are wrong. The population of Kherson is 76.6% Ukrainian, and this is undoubtedly reflected in the workforce of the factory. I see no reason to see this as another of Ukraine's ethmic conflicts.
So what will happen ? Molly is personally doubtful that this single trigger will result in a widespread revolt in Ukraine that will bring in a libertarian form of socialism- which seems to be what the Kherson workers are aiming at as their struggle develops. Yet who knows ? Whatever happens you can be sure that Molly will be following it. Dobre Dyen.
Posted by mollymew at 5:47 PM

Ireland too. See this.

It turns out that one of the leaders of the Chicago occupation, visited in Venezuela, with the occupied factory movement there.

1. No, it's not an ethnic conflict. If you listen to the workers, though (for instance, on Ukrainian TV: http://shuster.kanalukraina.tv/video/1621_pyatnichnyi_vypusk/), they are speaking Russian, or a mix of Russian and Ukrainian. The declarations are published in both languages. Slogans in marches are mostly in Russian, but some are also in Ukrainian. But that is true for much of Ukraine (including Kyiv).

2. The market is not only domestic. In fact, Russia is also a big market for Kherson farm machinery. The reason the plant has to be nationalized is that without it, Ukraine would loose its only large farm machinery plant, which is the backbone of agriculture.