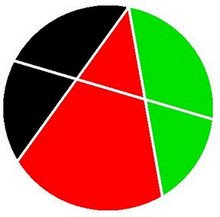 INTERNATIONAL ANARCHIST MOVEMENT-COLOMBIA:
NEW ANARCHIST FEDERATION/NETWORK IN COLOMBIA:
As elsewhere in the world anarchists in the country of Colombia have seen the need for further organization and coordination. Thus they have founded the Red Libertaria Popular Mateo Kramer/Peoples' Libertarian Network Mateo Kramer. Molly is sorry that she has no idea of who Mateo Kramer was. perhaps somebody else can enlighten me. The following is from the A-Infos site, but the original source is the Anarkismo site. Readers should note that there is an error 9in the link at the A-Infos site. i have corrected this in what appears below.
,,,,,,,,,,,,,,,,,,,,,,,,,,,,
Colombia: Founding of the Red Libertaria Popular Mateo Kramer:
Bogotá, 23 February 2009 ---- With great emotion and expectations we are pleased to announce that after two intense days of discussion and collective work we have successfully concluded the founding General Assembly of the Red Libertaria Popular Mateo Kramer ("Mateo Kramer" Popular Libertarian Network - RLPMK). Through long but fruitful reflection and in a general climate of debate and enthusiasm, the 11 groups that make up this Network have reached the following agreement points:
1. The RLPMK is an organization made up of individual libertarian collectives, working for Popular Power through the promotion of horizontal, grassroots self-organization and self-management in the physical and virtual territory of the city of Bogota
.2. The RLPMK carries out political work along with children, young people, political prisoners and workers, through popular, libertarian education, alternative means of communication and counter-culture.
3. The RLPMK carries out its activities according to the following organizational principles: complete self-management, horizontality,popular direct action, effective solidarity, grassroots work, collective self-education, popular ecologism and anti-capitalist diversity.
4. The RLPMK is part of the wider opposition block that rejects the current Colombian political regime and seeks to generate collective alternatives in order to advance towards a new world, a more just freer world.
The groups that participated in the Assembly and are part of the RLPMK are:

Molly is sorry that she has no idea of who Mateo Kramer was.

«Mateo el Suizo», Matthieu Cramer, was an international activist (from Geneva) who was deeply involved in the peasant and indigenious movement of Southern Colombia. He died in a car accident in december 2008.

A quick google search revealed this. Here's two articles that explain a bit who he was:

When you dont know something, google is your friend...