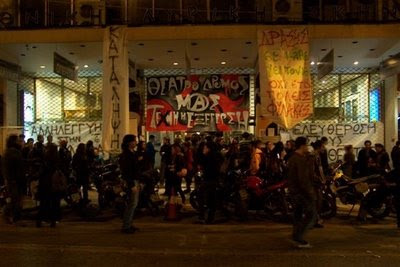 INTERNATIONAL ANARCHIST MOVEMENT-GREECE:
THE END OF THE ATHENS OPERA HOUSE OCCUPATION:
When, in late January, people occupied the opera house in Athens Greece, declaring it liberated, the news became, if somewhat belatedly, widespread across the "anarchonet". Since then nothing. Perhaps that might be because the occupation ended 5 days ago.
It is perhaps not unexpected that news can travel slowly, and nobody is to faulted for not being "up to the minute". Even so the spectacle of one anarchist news site reporting the occupation a day after it had ended was jarring (NO, it wasn't LibCom, one of the earlier publishers of the news-we'll leave the offender nameless). Molly is certainly not without sin, even if I do my best to check before putting into print, in this sort of thing, and I'd be a hypocrite to criticize others too severely.


What is worse than being late is to leave the matter hanging in the air. I think that reporting the end of a protest may be just as important in many cases as reporting its beginning. Often far more can be learned from the end than from the beginning. I certainly saw a similar thing around the German 'Strike Bike' occupation in 2007. Huge publicity at the beginning, and not even a "closed sign" when it ended. Once the matter had ended it seemed to be dropped like a hot potato by its most enthusiastic publicists. I remember doing a post script months after the end of the occupation then, entitled, I believe, "What Happened to Strike Bike ?"

Thousands of leaflets were distributed to the passengers of the buses and to those in the streets, explaining the content of the struggle and expressing also solidarity for the artists and workers of Teatro Colon in Buenos Aires who were fired, thanking the comrades of Lucharte in Argentina who introduced the issue of the occupied Opera in Athens to the workers of the Teatro Colon and organized solidarity from all over Latin America (Brazil, Venezuela, Ecuador). The leaflet of the artists in rebellion expressed also their full solidarity to the people of Palestine.

Behind the banners, many artists were dressed as for a show or as clowns. In front, marched a very beautiful, very young, ballerina with the two wings of an Archangel on her back, with her left fist raised while she was shouting revolutionary slogans- a really messianic figure! There was an orchestra playing music and supporting the songs of the marchers: a Cretan revolutionary song that we used to sing during the last military dictatorship of the colonels and in the 1973 Polytechnic uprising, “Bella Ciao”, ‘Commandante Che Guevara”, the International, but also the Toreador from the opera Carmen by Bizet, Ravel’s Bolero, as well as jazz (“When the Saints go marching in”), music from the popular theater of shadows Karaghioz, etc. There was also a caserolazo producing a fantastic noise.

The march has passed first from the place where the young Alexis Grigoropoulos had been assassinated by the police on December the 6th, a site which has been transformed into a popular shrine. At that point there was absolute silence, and, suddenly 2000 youth started to shout with what is called by the Bedouins in the Arab lands, “the Scream of the Desert”. It was like the simultaneous cry of 2000 wounded cubs. Nothing else. No slogans, no songs, just a scream for Alexis.

The march continued through the streets and the main square of Exarcheia, and then passed to the Polytechnic University. The marchers wrote a long inscription in its walls saying “Over the ruins of bourgeois civilization, we plant the forests of our dreams”.

The demonstration marched in the central avenue of Patission and it was directed to its final destination: a park which was destroyed by the right wing Mayor of Athens who cut all the trees of that popular place (the same Mayor had sent the riot police to guard the hideous Christmas Tree in Syntagma square during the December clashes) . The park was destroyed to make a parking lot for a big capitalist company. The people of that area (Kypseli) revolted last week, the mayor sent the riot police- and three kids were sent to the hospital (including one young comrade of ours who saw three toes of his foot cut off by a smoke grenade of the police).

When the march arrived at the destroyed park (where the people now try to plant new trees and they are camping there all night to prevent the building of the private parking) a popular fiesta started, full of joy, during all Saturday night, interrupting, of course, the traffic in own of the main avenues of the Greek capital!
La Luta continua!
Posted by mollymew at 7:42 PM

A much appreciated posting! I'd noticed the news item (a single text containing a communique and a couple of details that went up quite number of places around the 6/7/8th), and it seemed a bit atemporal...I tried a couple of searches, and got a ton of sites with the same item. Frozen in text.

This is of particular interest as I am cobbling together a bit of a project (a lucky convergence of personal interest and a cool anthropology class) on the ongoing/aftermath of the Greek uprisings on the net, and finding some dissonance between post-facto reconstructions and analysis (or those that have dropped the matter for fresher news) and the bits and pieces that seem to suggest things still simmering...at a level that would be a really big deal if it were happening in Montreal (where I find myself these days). The news is thinning out in a lot of channels, and just as I was getting hooked!

Anyhow, thanks for digging up the good stuff and posting it for the rest of us (and extra thanks: I linked this on my blog for the project I'm working on...hope you don't mind.)

Nope, no problem. Link away.
As I alluded to in the article I am somewhat disturbed by what I see as an oft repeated pattern around reportage of this, that or the other struggle. If you want to put it crudely, "every marxist sees every strike as 'the revolution' while too many anarchists see every riot as the same". To say the least this way of lokking at things is that old Marxist swearword "ahistorical", a swearword that marxists hardly ever comprehend the meaning of.
This is particularily sad in the 200th year of Darwin, when historical thinking should have become part and parcel of our everyday thoughts. I'm sad to say that too many "radicals" live in what I consider a dreamworld of abstractions and emotions. This blinds them to the ever shifting waves of struggle and passivity that comprise class society. they respond with fantastic enthusiasm to tghe peaks of the ways but learn nothing from the troughs, often ignoring them entirely.
Too bad.