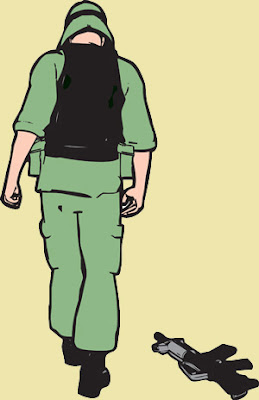 CANADIAN POLITICS/ANTI-MILITARISM:
THE CANADIAN CONTRIBUTION TO THE ISRAELI WAR MACHINE:
The following is from the Ottawa based Coalition to Oppose the Arms Trade (COAT). Despite Canada's reputation as the "peaceable kingdom" our arms trade supports numerous wars across the globe, including those of Israel. The following is a link to how we do this, and also to other ways in which we contribute to death worldwide.
,,,,,,,,,,,,,,,,,,,,,,
Canadian Military Exports to Israel: Aiding & Abetting War Crimes in Gaza (2008-2009):
The Ottawa-based Coalition to Oppose the Arms Trade (COAT) has just released an online report containing ten detailed tables of data about Canadian military companies with direct or indirect export links to Israel:
Canadian Military Exports to Israel: Aiding and Abetting War Crimes in Gaza (2008-2009)(Click above for an annotated list linking to the report's ten data tables, or use the quick links provided below.)
Summary Article (This article sums up the issues in COAT's report.)
"Canadian Military Exports, War Crimes in Gaza and Ottawa's Arms Bazaar"
CANSEC and CADSI
COAT's report is part of a campaign to oppose CANSEC, Canada's top military industry trade show. CANSEC 2009 is organized by the Canadian Association of Defence and Security Industries (CADSI). In an apparent conflict of interest, the federal government handed over $200,000 in grants to this arms industry lobby group, between 2006 and 2008. These "contributions" were explicitly to support CADSI's "international trade," "export marketing" and "international business development activities."

CADSI's CANSEC arms bazaar -- a closed, private event -- will be hosted by the City of Ottawa at its prime publicly-funded facility, Lansdowne Park, May 27-28, 2009.

COAT's report on Canadian military exports to Israel exposes details about more than 100 corporate members of CADSI that have export links to Israel. Many of these exporters will be exhibiting their wares at CANSEC this spring to potential buyers from many Ottawa embassies.
Stop Ottawa Arms Shows CAMPAIGN:
Please join us in exposing and opposing the CANSEC arms bazaar!

In 1989, in response to COAT's first campaign, the City Ottawa banned ALL arms shows from municipal property. But now they're coming back! This May is the 20th anniversary of COAT's mass rally -- led by former Mayor Marion Dewar -- when many thousands took to Ottawa's streets to peacefully protest against the ARMX weapons bazaar at Lansdowne Park

non-CADSI Canadian Military companies "actively pursuing" exports to Israel that are not current or past members of CADSI.
Events
If you are in Ottawa, we hope to see you at some upcoming events:
(1) Information and Strategy Session to Oppose CANSEC
Tuesday, March 24, 7 pm
Southminster United Church,
15 Aylmer Ave at Bank Street.
(Just south of the Rideau Canal. Enter from the Galt St. entrance at the back of the complex.)
(2) Rally to Expose and Oppose CANSEC
Speakers, Music and Candlelight Vigil
Wednesday, May 27 (evening - exact time to be announced)
Southminster United Church (see address above)
Speakers and Music in the church sanctuary will be followed by a Candlelight Procession just across the Bank St. bridge to Lansdowne Park, the site of CANSEC.
(3) Documentary -
OTTAWA PREMIERE
MYTH FOR PROFIT: CANADA'S ROLE IN INDUSTRIES OF WAR AND PEACE Hintonburg Community Centre
Wednesday, March 18, 2009,
7 pm
1064 Wellington Street (3 blocks west of Somerset)
More info and a trailer
The documentary will be followed by a discussion with the film makers, Amy Miller and Boban Chaldovich, who are on a whirlwind Cross Canada Tour in March and April.

Click here to find a film showing near you.

Note: One of the people interviewed in the above documentary is Richard Sanders, coordinator of the Coalition to Oppose the Arms Trade (COAT), editor of COAT's magazine Press for Conversion! and author of COAT's report entitled
Canadian Military Exports to Israel: Aiding and Abetting War Crimes in Gaza (2008-2009).