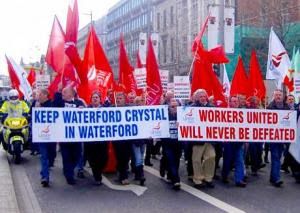 INTERNATIONAL LABOUR-IRELAND:
PROTESTING IN DUBLIN:
What were formerly the wunderkinds of the false prosperity built on debt are falling even faster than other economies in the present financial crisis.this is true of Ireland in its post-boom phase, and the Irish workers are fighting back against attempts to make them pay for the crisis. Here's the story from LibCom about last Saturday's massive demonstration in Dublin.
...........................
Huge protests against handling of the Irish economy:
About 100,000 people have taken part in protests in Dublin city centre yesterday (Saturday 21st) to vent their anger at the Irish government's handling of the country's recession.
They oppose plans to impose a 'pension levy' (real terms 10% pay cut) on 350,000 public sector workers. Trade union organisers of the march said workers did not cause the economic crisis but were having to pay for it.
In a statement, the Irish government said it recognised that the measures it was taking were "difficult and in some cases painful". However, the government said it reflects "the reality that we are not in a position to continue to meet the public service pay bill in the circumstances of declining revenue", it added.
Reports say the plan could cost the 350,000 public sector workers between 1,500 euros and 2,800 euros (£2,500) a year.
There were conflicting estimates of the numbers of people at the march, which began on the north side of Dublin in the middle of the afternoon. Police said 100,000 people were on the streets, while organisers said they expected 200,000 to protest in total.
The Irish Congress of Trade Unions (ICTU), which organised the march, said it was campaigning for "a fairer and better way" of dealing with the economic crisis.
"Our priority is about ensuring that people are looked after, the interests of people are looked after, not the interests of big business or the wealthy," Sally-Anne Kinahan, ICTU's secretary general, told the BBC.
However, reports from the Workers' Solidarity Movement (an Irish anarchist organisation) says that:
"the idea of the so called 'Pensions Levy' come from some of the very Irish Congress of Trade Unions leadership who are supposed to negotiate on behalf of workers. This is one revelation that emerged on Saturday morning at a meeting of over 100 public sector trade unionists and two delegates from the Waterford Glass occupation. We were meeting in the Davenport hotel, Dublin to discuss a collective response to government attacks on workers and in particular the public sector pay cut.
The revelation that the source of the 'pensions levy' may have come from within the ICTU delegation was made by Civil Public & Services Union (CPSU) executive member Terry Kelleher, reporting on what their executive had been told by the CPSU General Secretary who was at the talks. It's claimed that when the proposed 10% pay cut was put on the table part of the ICTU delegation proposed the 'pensions levy' as being more sellable."
One protester said he was "sick and tired of the way this government conducts itself and what it's doing to this country [...] I've a mortgage to pay, I've children to put through school, and now I'm being told I have to take cutback, after cutback, after cutback."
Ireland, which was once one of Europe's fastest-growing economies, has fallen into recession faster than many other members of the European Union. The country officially fell into recession in September 2008, and unemployment has risen sharply in the following months.
The numbers of people claiming unemployment benefit in the Irish Republic rose to 326,000 in January, the highest monthly level since records began in 1967.
Yesterday's rally signalled the beginning of industrial unrest within the Irish public sector. Around 13,000 lower-paid civil and public servants are to stage a one-day strike on Thursday while thousands of workers in the education sector and in the civil service are to vote on industrial action.
Posted by mollymew at 9:40 AM