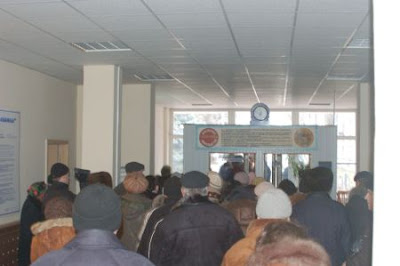 INTERNATIONAL LABOUR-UKRAINE:
WORKERS OCCUPY KHERSON ENGINEERING PLANT:
The tactic of factory occupations seems to be coming more and more common as the recession/depression bites harder. the following is from the Ukrainian Livasprava blog. A shorter version appeared on the British LibCom site. You can also follow the events on the Ukrainian anarchist news site Zaraz. All of the following has been slightly edited for English grammar.
...............................
WORKERS ARE OCCUPYING KHERSON ENGINEERING PLANT IN UKRAINE:
Today at 9:30 more than 300 workers occupied the administrative building of Kherson Engineering Plant. The workers demand payment of wages, nationalization of the plant without compensation to its owner and are decisively inclined to occupy the building until complete fulfillment of their demands. During the occupation no worker was injured. Factory guards did not resist seriously. The situation is controlled by yesterday's elected workers' council. The police have not yet appeared near the building.


At this moment the council is meeting in the former office of a technical director. Leonid Nimchinov, the chair of the workers council, says that these events must be widely spread and calls workers from other plants throughout Ukraine to display solidarity and support each other. In the near future he is going to address this call to workers of Lviv Bus Plant and other factories.


The main demands of protesting workers:

- payment of wage arrears (near 4.5 million Ukrainian hryvnias);
- nationalization of the plant without compensation to its owner;
- the state-secured plant’s production distribution – high-quality farm
machinery

In case their demands are ignored workers are ready to turn to the toughest forms of protest. Background:
On February 2, 300 workers of Kherson Engineering Plant started protest actions against non-payment of wages since September 2008 and actual destruction of the plant by its owners. During one of the previous meetings with the workers Ms. Pugacheva, the alternate director, said that the owners were not going to save the plant. “Why do you stick to this plant so much?” she said. The workers hold a meeting near the entrance and elected 5 representatives to the Workers' Council and its chair Aleksey Nimchinov who will lead the future struggle and negotiate on behalf of the workers.
Contact
Zakhar Popovich, +380 91 114 01 76
Photos, details and updates in Ukrainian and Russian
http://financist.org.ua/news/4222
http://shapinbaum.livejournal.com/86723.html?style=mine
http://samozahist.org.ua/
............................
There is also an online solidarity campaign in support of the workers of Kherson. The following gives details and how you can participate.
...........................
SOLIDARITY CAMPAIGN FOR THE WORKERS OF KHERSON:
Solidarity with the workers of the Kherson Machine Building Plant, who are currently occupying the offices of the company and will retain it to meet the requirements! Solidarity with the legitimate demands - honest payment of money owed - work which can be done any time under the pressure of power. . It is probable that the owner of the factory will attempt to utilize the power structures to combat the works council. In fact right now, for fear of further decisive action, capitalists are trying to institute criminal proceedings against employees. We believe that it is now more important than ever to demonstrate to brazen businessmen that the workers - thousands of people in different cities- stand united. Send e-mail messages in support of Kherson WORKS!
Recipients:
vd-komp@oda.kherson.ua
alex@bcmaz.com.ua alex@bcmaz.com.ua
boss@bcmaz.com.ua boss@bcmaz.com.ua
SAMPLE LETTER:
I have become aware that the machine-building plant in Kherson (formerly "Kherson combines") has not paid wages since September 2008. The debt is more than 4,5 million hryvnia (U.S. $ 600 thousand).

I fully support the actions of the working staff, who took the building of the factory administration. I also fully support the just demands of the collective enterprise for the urgent need for payment of all arrears of wages. Also the need to punish the administration and the owner of Kherson Machine Building Plant, responsible for the nonpayment of wages. I fully support the requirements of the team on the need for nationalization of the Kherson machine-building plant without compensation to the owner, as well as the requirement on the state marketing company.
Yours sincerely,
..........................
The following is the latest update on the situation in Kherson.
.......................
Kherson: renamed factory workers and plan to expand the fight :
Updated information from the Kherson refinery engineering.
Representatives of the owner - a factory lawyer (name unknown) and the Technical Director Shlyahover Sergey applied to the prosecutor's office in which they characterize the actions of the workers as «unlawful capture», claiming that there were some «masked men» (this is a lie). Representatives of the prosecutor's office, however, do not seem to take seriously the statements of representatives of the owners. The Prosecutor's Office confiscated the plant accounts, and prosecutors said that it was their intention to complete a criminal case against the institution and the Director of the Plant Mrs. Pugachova for several months on charges of nonpayment of wages.

Factory workers went to the prosecutor's office and provided evidence to refute the false statements by the representatives of the capitalists.

Also this morning a meeting of representatives of the Council work team with the governor of the area took place. The Governor is not condemned the actions of the workers and said that the workers can not leave the factory before the owner arrives to negotiate with them. Overall the Administration expressed support for the requirements of nationalization, but the «only in the framework of the law».

It was decided to rename the plant. The Signboard «Kherson Machine-Building Plant» was removed before capture by the owners of the business that were going to destroy the plant, drive all the workers out and sell the equipment for scrap. Now, instead of the owner's sign workers hung another: «Kherson State Machine-Building Plant. G. Petrovskii ». Thus, the plant was returned to the name of one of the leaders of the Bolshevik Party and the Labor Movement in pre-revolutionary Russia - Grigory Ivanovich Petrovsky.

Workshops will expand the fight, bringing to the workers of other factories in Kherson, as well as students.

Information was also received that the Chairman of the Council work team Leonid Nemchonka was invited to tomorrow's television show Shuster-live.

There are currently about 100 workers on duty at the factory . Chairman of the Board of TOV Nemchonok, speaking on local TV, stated that the factory workers will stand up to the end. «Our cause is just, the victory will be for us», he said.
Victor Shapinov
PHOTO yesterday's events
............................
Molly obviously cannot agree with the politics of the representatives on the workers in this case, but she still applauds the actions that have been taken. As I have expressed before on this blog it is better than occupied factories become producers' cooperatives rather than be nationalized. There may be some cases, however, where nationalization is the only feasible course. In a country such as Ukraine and in the situation of a machine engineering factory this may be true. If, however, that sort of course has to be followed then it should be made plain that the resulting factory management should be as democratic as possible- not a return to the old days of communist bosses.
Posted by mollymew at 10:45 AM

I agree with Molly in regards to nationalization. But "The situation is controlled by yesterday's elected workers' council." is music to my ears!

In the current conditions, the workers cannot organize a supply of parts, restore electricity and secure sales for farm machinery.
Large farm machinery is a kind of business that is on government support in many places around the world. Certainly in Ukraine.
Besides, the owner has removed all the ready products and even some of the shop machinery.