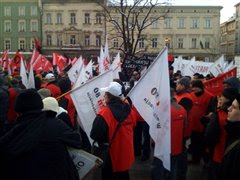 INTERNATIONAL ANARCHIST MOVEMENT-POLAND:
ANTI-NATO DEMONSTRATIONS IN KRAKOW:
As the defense ministers of NATO gather today in the Polish city of Krakow anarchists and their allies are gathering to protest this militaristic alliance. Here's a report from the A-Infos website. For further information (in Polish) see the Polish anarchist news site Centrum Informacji Anarchistyczej.
...........................
Anarchists protest NATO meeting in Krakow:
As a two-day informal meeting of ministers of defence from NATO countries gets underway in the city of Krakow, southern Poland today, anarchists and other ‘anti-war’ organisations hope to use the occasion to protest against ‘NATO hypocrisy’. (photo: Anarchists and leftwing groups gather in market square, Krakow).
----
In a darkened apartment in Kraków’s Kazimierz district, the Anarchist Federation invited members of the press, Wednesday, to explain what exactly they are planning for the “anti-summit”: a protest against the informal meeting of NATO defence ministers taking place in Poland’s southern city on 19-20 February.
----
“I will make speeches, I will scream, I will sing: we will see what happens”, Artur, head of the anarchist march in Kraków, told thenews.pl
In conversation with the mild-mannered anarchist, Artur said that of course the Anarchist Federation “wants to see the destruction of capitalism and the state”, but for the NATO conference in Kraków the federation has more modest goals, wanting to voice their protest against what they call the “hypocrites from NATO”.
The informal NATO meeting in Krakow is an important one, even though no official declarations are to be made. It is Jaap de Hoop Scheffer’s last summit as head of the organisation before NATO’s 60th anniversary celebrations in Germany and France in April this year. United States’ defence secretary Robert Gates will also be in attendance and it will be the first such gathering since the new Obama administration took over the White House in January. And it is Poland’s 10 year anniversary in the Organisation.
The main topic of the meeting will be the multi force ISAF mission in Afghanistan. The gathering will be attended by representatives of all ISAF participants – the 26 member states that make up the Atlantic alliance and 15 countries outside NATO. The Afghani defence minister is also expected to appear.
The ministers will discuss the problem of securing presidential elections in Afghanistan, the struggle against the production of opium poppies which fund the Taliban insurgency,and training of the Afghani army and police.
The meeting in Krakow will also be a chance to hold numerous bilateral talks, as well assessions of the NATO-Georgia and NATO-Ukraine enlargement committees.
The defence ministers are also to deal with the draft of the Atlantic security declaration, which is being prepared for the official NATO summit which is to take place at the French-German borderland in Strasbourg and Kehl in April.
The gathering in Krakow will be accompanied by several demonstrations against the arms race and the war in Afghanistan. The organizers of the demonstrations - the “Stop War”Initiative, the “August’80” trade union and the Anarchistic Federation - expect around one thousand demonstrators.
The Mayor of Kraków has given the go-ahead for a march to be held on February 19, with protests to be staged on the Main Market Square at 4pm, and a “No Logo” street party to beheld by the National Museum at 7.30pm. As another anarchist told us: “The party is to show that we don’t need the government’s money to have a good time”, a response to unofficial reports that the Polish Ministry of Defence is forking out almost 9 million zloty for the NATO event.
The protest march hopes to attract many from the Czech Republic, where the radar
installation of the US-sponsored missile shield is to be based.
Posted by mollymew at 8:24 PM