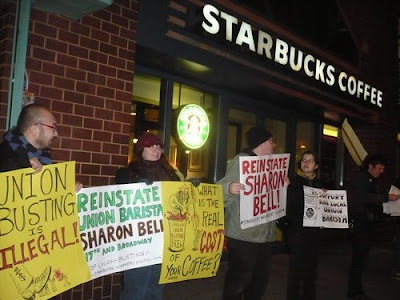 AMERICAN LABOUR:
SOLIDARITY WITH SHARON BELL:
The following item is from the website of the Industrial Workers of the World (IWW), the parent organization of the Starbucks Union who have been organizing baristas at the chain for the last few years. be sure to check out the Starbucks Union website for further information on their efforts.
............................
Protesters Charge Starbucks With Union-Busting:
From NBC New York:
Protesters call for "reinstatement of all fired union baristas"
With 10 or 15 current and former Starbucks colleagues by her side, former barista Sharon Bell stood dressed in a black winter parka holding a sign with the names of six recently fired baristas, including herself, and the words, "Rehire laid off baristas now!!!"
Last week, Bell was fired by Starbucks for what her managers said were issues relating to her tardiness and overall attendance, a charge she and her fellow union members adamantly deny.
Bell said the real reason for her "expresso termination" is recent activity with the Starbucks Workers Union. In a document given out at the protest, the union claims the popular coffee company "has illegally fired three baristas for organizing with the Starbucks Workers Union. Sheanel Simon, Sharon Bell and Neal Linder are excellent baristas and highly respected union members." The Union goes on to note that Simon has since been reinstated, while Bell and Linder remain unemployed.
Included with the documents are demands that range from the practical to the lofty, with calls for "severance packages for all laid off baristas," the restoration of benefit programs like personal days, vacation hours, and 401ks, "the reinstatement of all fired union baristas," and "an end to fear-based management and illegal union-busting."
Just last December, a judge found Starbucks guilty of union-busting.
Starbucks officials have yet to respond to a request for comment, and the protesting group plans to stay "until their message is heard." With enough expressos, that could be all week
.Copyright NBC Local Media
Photo by Angela Cranford
Related Links
NBC New York
Wobbly City
Links from Article Text
NBC New York
Posted by mollymew at 12:50 PM