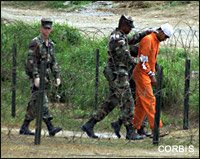 AMERICAN POLITICS/INTERNATIONAL HUMAN RIGHTS:
IS OBAMA WAFFLING ON HUMAN RIGHTS ?:
Are the cracks finally starting to show in the gilded Obama icon ? The following from the Human Rights First group suggests so. Seems the Obama Administration has a different idea of government secrecy-continuing the policies of the Bush Administration- than members of Congress do. here's the lowdown and what you can do to help.
..........................
IS OBAMA BACKING BUSH'S SECRET POLICIES ?:
NO More Government Secrets About Detainees

Please, ask Congress and the Obama administration to amend the "state secrets" doctrine.
For many of us, how the U.S. treats victims of government abuse is among the most important symbols of our respect for human rights.
Human Rights First had hoped that the new administration would reverse one of the Bush administration's most egregious practices in this area – abuse of the "state secrets" doctrine. They've done the opposite, and we are deeply concerned. Please, join us in asking Congress and President Obama to stop secret government practices now.
Some background: last week the Obama administration adopted a dangerous legal position aimed at blocking certain torture claims in court. This position – invoking the "state secrets" doctrine to block civilian lawsuits – was used by the Bush Administration to shield policies of official cruelty, torture, and secret prisons for seven years.
The House and Senate reacted quickly with legislation that would check excessive government secrecy. The proposed bill, called the State Secret Protection Act, provides for a more transparent process that involves judicial review of victims' torture claims but still protects sensitive national security information.
We need to bring back the balance of powers. Help Human Rights First make sure the Obama Administration doesn't commit the same errors we saw in Bush's War on Terror by urging your members of Congress to support this bill. Victims have a right to know the truth about what was done to them and to seek remedies for government abuses in court.
Human Rights First has worked for years to end policies of secrecy and official cruelty. After years of advocacy, our coalition of military leaders stood behind President Obama as he signed the executive orders to end torture and close Guantánamo, and we celebrated that moment. But last week was a disturbing setback. Please, join us in urging Congress and the Obama administration to get back on track.
Thank you.
Sincerely,
Deborah Colson
Acting Director,
Law & Security Program
.........................
THE LETTER:
This one, I'm afraid, is only for our American readers. Please go to THIS LINK to send the following letter to your Representative or Senator.
........................

I write to urge you to co-sponsor the State Secret Protection Act of
2009, versions of which were introduced last week with bi-partisan support in
both the Senate (S. 417) and the House (H.R. 984). If enacted, this
legislation would encourage independent and meaningful judicial review of
government actions while protecting against the disclosure of sensitive national
security information. It would also encourage greater transparency and a
more appropriate balance of powers on national security matters.

Since September 11, 2001, the government
has invoked the state secrets privilege in cases challenging extraordinary
rendition, torture and warrantless domestic surveillance, seeking dismissals of
lawsuits at the pleadings stage before any evidence is requested or
produced. Many courts have accepted the government's claims of risk to
national security without independently reviewing the information itself in
order to assess whether the information could be disclosed without undue risk,
or whether lawsuits may proceed without it. This practice has perpetuated
a culture of unchecked power, a complete lack of transparency and has also
undermined the right of individuals to seek and obtain remedies for human rights
violations.

The State Secret Protection Act would
balance the need to protect sensitive national security information while
facilitating the role of the courts as a meaningful check on executive
power. The legislation would require courts to independently examine the
information for which the government asserts a privilege and decide whether
disclosure of the information would pose an unreasonable risk to national
security. If a court decides the government has validly asserted the state
secrets privilege, then the court would be required to determine whether it is
possible to craft a non-privileged substitute for the evidence and to resolve
the issue in favor of the plaintiffs if the government refuses.

Legislative reform of the state secrets
privilege is also necessary in order to help bring the United States back toward
compliance with international law. The United States has an obligation to
provide access to effective remedies for human rights violations under the
International Covenant on Civil and Political Rights and the Convention against
Torture and Other Cruel, Inhuman or Degrading Treatment or Punishment.

I strongly support legislative reform of
the state secret privilege, and I urge you to co-sponsor the State Secret
Protection Act.