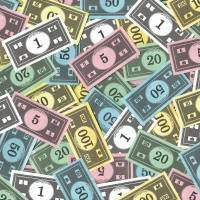 ECONOMIC CRISIS:
VALUE FOR YOUR MONEY ?:
The following article by Linda McQuaig is taken from the online progressive news site Straight Goods. It originally appeared in the Toronto Star. Think about the following the next time you hear about the "incentives" that management claims it needs.
..........................
About those bank CEO salaries...:
There is no evidence that phenomenal pay packages inspire higher performance levels.
by Linda McQuaig
It's probably a while still before we see bank CEOs on street corners selling the homeless news.
But reports last week of bank presidents cutting their own pay were somewhat eye-catching. (For a little perspective: Rick Waugh of Bank of Nova Scotia will take home $7.5 million this year — after his cut.)

Starting in the 1980s, a sea change swept away concerns about inequality and unleashed an era of greed and skyrocketing incomes at the top.
Still, the pay cuts suggest that even inside the most well-fortified Bay Street towers there are jitters that the people down below may start questioning how the economic pie is divided and why they are getting such a small — and shrinking — slice.
Certainly revelations of Wall Street hijinks have raised questions about the skewed nature of financial rewards and, more generally, about how far North American culture has drifted from what used to be known as the "work ethic".
We're waking up to the fact that, starting in the 1980s, a sea change swept away concerns about inequality and unleashed an era of greed and skyrocketing incomes at the top.
We're told that exorbitant pay is necessary to motivate great performance.
But that canard was surely put to rest last month by John Thain, former CEO of Merrill Lynch. Thain explained that it had been necessary to pay $4 billion in executive bonuses to keep the "best people", after those people had just steered the company to a net loss of $27 billion and helped trigger a global recession. (What might some less capable people have done? — started a nuclear war?)
Even when there is great performance, does the wild inflation in top incomes make sense?
Take baseball. In the early 1970s, Hank Aaron was the top-paid player at $200,000 a year. Last year, Alex Rodriguez, with similarly dazzling statistics, earned $27.7 million. Adjusting for inflation (but not for drugs), that makes Rodriguez's pay more than 25 times greater than Aaron's. Is Rodriguez's performance more than 25 times better?
There's no evidence that today's phenomenal pay packages — in sports, entertainment or business — are motivating today's players, performers or executives to any higher performance levels than more modest packages did a few decades ago.
Indeed, there's little logic to our approach to financial rewards. People want to be compensated for work — particularly when it involves drudgery or unpleasantness. But those at the top typically love their jobs, and are motivated by the desire to excel and win recognition. Money is one form of recognition, but there's no evidence that financial rewards have to be gigantic, or that much larger financial rewards produce any greater results.
Vincent van Gogh was motivated to produce hundreds of works of great art, even though he only managed to sell one of them, for a pittance, just before he died. Shakespeare produced the world's greatest dramas without even the prospect they'd become Hollywood blockbusters.
The pay for those at the top has gotten ridiculously out of whack in recent years. Among other things, this underlines the need for a more progressive tax system.
It's also been noted that if we cut the pay of those running our financial institutions, they might seek more useful employment as teachers or health-care workers. But a letter to The New York Times last week made a compelling case for maintaining Wall Street bonuses: "Without them, Wall Streeters will all look for other jobs. Do we really want these greedy, incompetent clowns building our houses, teaching our children or driving our cabs?"
Journalist and best-selling author Linda McQuaig has developed a reputation for challenging the establishment. As a reporter for The Globe and Mail, she won a National Newspaper Award in 1989 for writing a series of articles, which sparked a public inquiry into the activities of Ontario political lobbyist Patti Starr, and eventually led to Starr's imprisonment. In 1991, she was awarded an Atkinson Fellowship for Journalism in Public Policy to study the social welfare systems in Europe and North America.
She is author of seven books on politics and economics – all national bestsellers – including Shooting the Hippo (short-listed for the Governor General's Award for Non-Fiction), The Cult of Impotence, All You Can Eat and It's the Crude, Dude: War, Big Oil and the Fight for the Planet. Her most recent book is Holding the Bully's Coat: Canada and the US Empire.
Since 2002, McQuaig has written an op-ed column for the Toronto Star. This article, which appears here with permission, previously appeared in The Star.
Email: lmcquaig@sympatico.ca. Website: http://www.lindamcquaig.com.
Posted by mollymew at 9:58 AM