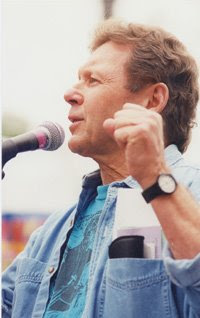 RELIGION:
WHO IS TO BE EXCOMMUNICATED ?:
The following is from the School of the Americas Watch. The SOA Watch is dedicated generally to pressuring the USA to observe standards of decency in its dealings with Latin America and specifically to close down the "torture school" formerly known as the School of the Americas. Father Roy Bourgeois has been one of the movers and shakers behind this organization, and he is presently facing the threat of excommunication due to his participation of the ordination of a female priest in contradiction to orthodox Catholic Canon Law. The following tells about his case and asks you to write/fax in solidarity with him.
.........................
Father Roy Bourgeois Update:
Father Roy will be among the SOA Watch activists who will converge in Washington, DC for the SOA Watch Encuentro and the Lobby Days from February 14-17, 2009. Join us!

As many of you know, Father Roy has been threatened with excommunication by the Vatican after he participated in the ordination of former SOA Watch Prisoner of Conscience Janice Sevre-Duszynska. Father Roy is currently waiting for a response to a letter to the Vatican, in which he stated that he can not recant his belief and public statements that support the ordination of women, as the Vatican had requested.

Some of you have asked for addresses to write to in support of Father Roy and to ask that he not be excommunicated. Click here for a list of addresses.
.........................
The list of addresses suggested by the SOAW follows below. Take special note of this. This may be the only chance you will ever get in this life to send a letter of protest to the Pope and also to the Congregation for the Doctrine of the Faith, also known as the Holy Inquisition.

The move to excommunicate Bourgeois is particularly inopportune for the Vatican given the recent controversy over the lifting of the excommunication of the 4 bishops ordained by the late Marcel Lefebvre. The traditionalist catholic followers of Lefebvre's sect and his front organization The Society of St. Pius X has often been tainted by accusations of neo-fascism and anti-semitism, and one of the "bishops" whose excommunication has been lifted, Richard Williamson of England, is an active and vocal Holocaust denier. The scandal of rapprochement with this sect has led to considerable pressure on and disapproval of the present Pope. The idea that the Vatican should be considering excommunicating someone like Bourgeois while, at the same time, welcoming the likes of these back into the fold is particularly scandalous.
As a point of interest the followers of Lefebvre, who broke away from the Catholic Church in protest over the liberalization of Vatican Council II should never be confused with the 'Old Catholics' who split with Rome after Vatican I in 1870 because they couldn't accept the doctrine of Papal infallibility. The Old Catholics are considerably more liberal than the orthodox Church, and many of their congregations accept the ordination of women- the issue at the heart of the complaint against Bourgeois. There is some controversy over whether women were ordained in the early Church. I am hardly competent to form a firm opinion on this matter, but judging from the example of the Old Catholics such a thing is not totally outside the ideas of at least some on Church tradition.
..........................
Support Father Roy:
Some have asked for addresses to write their support of Fr. Roy and to ask that he not be excommunicated. Petitions are also appropriate.
Please write or fax or email to Pope Benedict XVI, and/or the Pope’s Ambassador to the U.S., the Apostolic Nuncio, and/or the Congregation for Doctrine of Faith, the group that is moving toward excommunication of Fr. Roy Bourgeois, and/or The leaders of the Maryknoll Order.
Their addresses are below.
ADDRESSES TO WRITE:
Pietro Sambi, Apostolic Nuncio
3339 Massachusetts Avenue, N.W
Washington, DC, 20008
Telephone: (202) 333-7121
Fax: (202) 337-4036
Pope Benedict XVI
00120 Via del Pellegrino
Citta del Vaticano, Europe
The Pope’s email address (for English correspondence) is:
'benedictxvi@vatican.va
This e-mail address is being protected from spam bots, you need JavaScript enabled to view it
FAX from USA:
011-39-06698-85378
Congregation for Doctrine of Faith
Piazza del S. Uffizio, 11, 00193 Roma, Italy
Telephone: 06.69.88.33.57; 06.69.88.34.13
Fax: 06.69.88.34.09
Please send a cc of any message or petitions you send to:
Bill Quigley – Attorney for Fr. Roy
7214 St. Charles Avenue, Box 902
New Orleans, LA 70118 or
duprestars@yahoo.com
This e-mail address is being protected from spam bots, you need JavaScript enabled to view it.
Posted by mollymew at 7:24 PM

Check out this new Christian band that just released their first album.

From what I heard on the samples site, they sound really good.