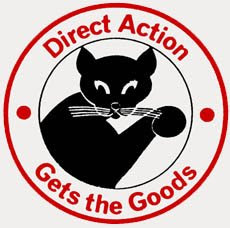 THE EMPLOYEE FREE CHOICE ACT-A WOBBLY VIEW:
Over the past few months Molly has received oodles and oodles and oodles of mail in her inbox from various US labour organizations about the 'Employee Free Choice Act'. To listen to its promoters this proposed bill is a cross between the Second Coming and free ice cream for all. To say the least I have been sceptical because, insofar as I can make out, the Bill would merely make labour organizing about as easy and as hard down USA way as it is up here in Canada. Hardly a Messiah in congressional robes. Here's another sceptical view, from the website of the Industrial Workers of the World (IWW).
,,,,,,,,,,,,,,,,,,,,,,,,,,,,,
Can We Rebuild The Labor Movement With The Employee Free Choice Act?:
By Adam W. - Industrial Worker, January, 2009
Much has been said in the United States labor movement around the Employee Free Choice Act (EFCA), a bill many mainstream leaders tout as the solution to the decline of unions. With the recent election of Barrack Obama and the Democratic Party holding the majority of seats in both houses of the US Congress, these same leaders have their hearts set that their millions of dollars in campaign contributions will pay off with the passage of the bill.

The meat of the EFCA would amend existing labor law in the US to allow unions to gain official recognition in a workplace through a majority of workers signing authorization cards and avoid the perilous and employer-dominated election route. Once a union is certified, employers have to begin sitting down with the union within ten days. If no deal is reached government mediators can force employers to sign a first contract, even without the vote of workers. The EFCA also would drastically increase the penalties companies face for violating workers rights, such as with firing workers for organizing, which happen at record rates in the US compared to the rest of the industrialized world. Workers could receive up to three times the back pay owed and companies could be fined up to $20,000 for willful or repeated violations.

What are members of the IWW to think of this? We are a small but growing international union with a vision of a completely different world. Not the vague change promised by both sides in the US presidential elections, but a world without bosses, where everyday workers are in the driver’s seat, and where hopes and dreams for a better world can truly be realized. Will the passage of the EFCA move us closer to our vision of a new world? There is certainly a great deal of hope in the change that the EFCA could bring, but I think we need to look more critically whether substantial change will come even if the EFCA should pass.
Weighing the EFCA
Let’s lead off the discussion on the positives. With the harsh reality of unemployment, growing debt and long stagnant wages that many workers throughout the US are currently facing, mainstream news coverage of Congress merely debating workers rights is enough to make millions consider the idea of a union at their workplace. This could provide an opening in the narrow, pro-business discussion that dominates US politics. Should it happen, members of the IWW would be wise to seize this opportunity to talk with more workers and expand our organizing wherever we can.

Further, if the Act should pass in its existing form (as it could easily be watered down) the increased penalties could provide us with greater leverage over resistant employers. A prime example would be New York warehouse employer Handy Fat Trading, which has fired IWW members and defied several rulings by the National Labor Relations Board (NLRB). Both a national debate around unions and workers right and greater enforcement of labor laws would help us in the IWW.

Now let’s discuss why I think we should see the EFCA in a critical light. Many labor leaders promote the bill in language that ranges from a ‘great step forward’ to a cure-all of sorts, which would usher in a new era of unionization such as the Congress of Industrial Organizations (CIO) organizing drives of the Thirties.

I think these views have some serious problems.

First, I’m skeptical that it will pass and not just because Obama has appointed a centrist cabinet of former Clinton officials. Labor’s betrayal by Democrats and the game of “wait and see, they’ll deliver” every time a Democratic president comes to power is a river so deep, you may as well call it an ocean. Barring significant strikes or actions by workers that begin to scare business elites into wanting to offer labor a bone, I don’t see this history changing.

The largest issue with the EFCA, though, is the use of card checks to gain official union recognition. To join a union, a worker would sign a membership card. If more than 50 per cent of the workers signed cards, the employer would have to recognize the union.

While the bill would undeniably make this process easier, I don’t think this will lead to the huge membership increases we’re led to believe. Canada, for instance, has similar card check recognition and enforced arbitration laws yet it has a declining private sector union rate of about 17 per cent, compared to eight per cent or less in the US. Despite the laws, Canadian companies have continued to effectively use union-busting to prevent workers from organizing and to decertify existing unions at higher rates than new ones can be organized—exactly the same situation as in the US.

Mainstream labor’s embrace of this aspect of the EFCA is actually the most troubling in my eyes because it represents the same problem that has been plaguing mainstream unions since the passage of the National Labor Relations Act (NLRA) in 1935: trading easier membership gains and labor peace in exchange for the shop floor militancy that can actually fight effectively to win against employers. If unions are able to gain recognition through card check that they wouldn’t have been able to do through fighting for voluntary recognition, this drastically increases the likelihood that the large, centrally controlled business unions will be meeting employers at the table with stacks of authorization cards and passive bodies of workers, rather than the well organized rank-and-file committees needed to win. These unions would rely on two year, government-imposed contracts that workers will not be able to vote down and which will bar workers from striking.

Overall, much of mainstream labor’s framing of EFCA promotes short cuts to rebuilding the labor movement, such as relying on government laws, rather than the hard work of organizing and fighting the bosses that is needed. This framing is a not an entirely subtle analogy drawn between the EFCA and the mass organizing of industrial unions in the 1930’s under the breakaway CIO that was allowed by the passage of the National Labor Relations Act in 1935.

But the analogy doesn’t hold water. The worker insurgency of the 1930s in the US was a mass movement of workers who struck and occupied factories largely without any leadership by unions and before the formation of the CIO. The government reacted to this development by passing the NLRA in 1935, whose purpose was to cool disruptive strikes through offering workers the legal right to collectively bargain. In the next several years, the CIO was then able to sweep the insurgents into its membership as the wave of sit-downs peaked in 1936-37. Over the next decade, the CIO worked to create its own “labor peace” through signing no-strike clauses, curbing the ability of workers to deal with grievances on the shop floor, and channeling workers’ energies into electoral politics (for more see Frances Fox Piven and Richard Cloward’s chapter on the CIO in Poor People’s Movements). This background should be kept in mind any time we hear arguments that federal laws and union officials make history and not workers themselves.

So, in what light should labor radicals who want to rebuild the labor movement and create a new world, see the EFCA? First, we should not hold our breath or hold back in any of our organizing efforts by waiting for its passage. Second, should the EFCA pass, we should take every effort to take advantage of the increased discussion of unions. This may be difficult in practice as workers may approach us wanting to organize, but under the false impression that it is suddenly “easier” under the new check recognition. We need to stick to our guns, though, and continue our practice of solidarity unionism, even when it involves strategically using the card check process.

Above all, we should remain critically cautious and skeptical around the promises of the EFCA and even more skeptical of those in the labor movement who promote it.