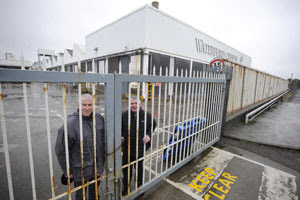 INTERNATIONAL LABOUR:
COMMUNITY STANDS BEHIND WATERFORD CRYSTAL WORKERS:
The following item is from, of all places, the Irish Sunday Business Post. It is valuable for two reasons. One is that it shows how the community of Waterford has pulled together behind the workers occupying the factory. The other thing, perhaps even more significant, is the brief mention of how the workers involved have actually been carrying on the normal business of the centre-in the absence of both management and the parasitic owners. Yes, it can be done. Workers can indeed run workplaces democratically without the "benevolent" hand of managers, either private or government. It is unfortunate that the imagination of the union involved only extends so far as to hoping for a private buy-out or, at most nationalization. The Waterford Crystal factory would be a prime candidate for a producers' co-op. It has an assured market, and its products are easily distributed without having massive funds tied up in inventory. If the government were to get involved at all it should merely be in the form of guaranteeing credit for such a venture. To say the least helping to save the Waterford plant would be far more "stimulatory" than most other government plans. By continuing to ship product and maintaining the furnaces the workers have demonstrated that they are capable and more than competent enough to run the enterprise on their own. Why not ?
Here's the article.
..........................
Waterford on the precipice:
Sunday, February 08, 2009
By Nicola Cooke
Not one Jasper Con ran or John Rocha designed glass is out of place at the Waterford Crystal visitor centre, but protesting workers not customers now throng the centre. Camera crews hired by American director Michael Moore(Oh God!-Molly) spent some of last week recording the workers’ sit-in for a documentary on worldwide workplace protests.

The occupation at the centre, which is on the outskirts of the medieval city, began nine days ago after workers were told by receiver David Carson that manufacturing was to stop, with immediate effect. This was despite Carson being in talks with two interested parties, KPS Capital and Clarion Capital, about a takeover of troubled company Waterford Wedgwood. Workers want their redundancies rescinded before they will leave the building.

The sit-in has become a community effort, with thousands of euro already contributed to a workers’ relief fund. Bakers are supplying fresh bread on a daily basis to the Waterford staff restaurant - which has been stocked for free by local suppliers - and there are even toilet cleaning rotas.

Staff have been mild-mannered and restrained. Employees who were recently sacked have continued to work shifts to keep the plant’s furnace burning - without which glass products could not be made, and which would cost several million euro to replace if it was shut down.

‘‘We shipped thousands of euro worth of crystal to Britain today, and orders for thousands of euro more are still coming in - this business is not a sinking ship, and we are not going to let it go down that easily,” said Unite shop steward Joe Kelly, an industrial engineer who has worked for 36 years at the Kilbarry crystal plant.

‘‘Waterford Crystal is a globally recognised brand that can still make big profits, and this city and county cannot afford to lose such an icon. Directly, there are 700 jobs under threat, but indirectly there are thousands more from transport and logistics, to catering and cleaning contractors. This visitor centre had 350,000 visitors last year - the third-highest number of people to visit any such centre in Ireland last year - we can’t let a huge draw like that just slip through our fingers,” Kelly said.

The impact a closure, or partial closure, of the factory would have on general trade and business in Waterford has not been lost on any of the local business people.

Waterford Chamber of Commerce chief executive Monica Leech said that to lose Waterford Crystal would be a ‘‘huge economical and psychological blow’’ for the city, and said that its direct benefit to the local economy had been estimated at €40million by economists.

‘‘Without Waterford Crystal the general spend in the city would drop hugely. This is due to the tourism and retail spin off it provides and because so many jobs are directly and indirectly dependent on its operations. We are confident, however, it will attract a buyer,’’ she said.

‘‘I suppose what the situation highlights is Waterford’s dependence on older industries, like manufacturing, and the lack of a regional drive for research and development jobs, and industries like biopharma. WIT [Waterford Institute of Technology] is doing great work in the telecoms sector, but we really need a university here - and all that attracts.”

Harvey Travel owner Seán Power said in a good year his subsidiary, Waterford Cruise Developments, handled 4,000 to 5,000 cruise customers and their only reason for docking in the south-east was ‘‘to see its jewel -Waterford Crystal’’.

‘‘Cruise passengers spend an average of five to seven times more than independent travellers. It is Waterford Crystal’s exclusive brand name that ensures it is included in the itineraries of these cruises, cruises where most of the passengers are wealthy Americans,” he said.

Paul McDaid, managing director of Tower Hotel Group - which has two hotels in Waterford - said he had contracts with CIE Tours and Globus for tourist groups six days a week from April to October. This averages around 50 people per night.

‘‘In terms of room rates, this alone is worth €500,000 to me annually, and that is not taking account of what these people spend in the bar. Without Waterford Crystal I do not think there would be tour groups coming here - we don’t have attractions like Kilkenny Castle or the Rock of Cashel here. I would imagine family run businesses could survive if the plant were to go, but there’s no doubt it would be the death knell for some hotels, restaurants and shops if it is not taken over,” he said.

The French owner of up market bistro La Boheme concurred with this view. Eric Theme, who opened his restaurant two and a half years ago, said a number of nearby premises were already shutting as a result of the recession.

‘‘For some of our customers their main reason for visiting Waterford is to see the home of the crystal. I am from Brittany and knew about Waterford Crystal when I was a child. It is world-famous,” he said.

Tom Cunningham, a local developer and Waterford city councillor, said a multi-agency group had been set up almost a year ago when a number of redundancies were announced.

Since then, he said the group had been pooling ideas and coming up with initiatives to help the city survive.

‘‘There is a local effort to deal with this situation in the best way possible, but it is vital that the manufacturing of the glassware - which is a hugely skilled job - continues in Waterford, and that the visitor centre remains open.

The message is clear.
Workers have been occupying the Waterford Glass factory in Kilbarry for five days now after the receiver was unable to borrow further funds to keep the plant operating. Yesterday as 150 workers continued the occupation members of the Cork WSM visited the plant and interviewed Joe Kelly, the chairman of the Crystal Unite branch. The Cork branch later issued a statement in support of the occupation.
The closure threatens not only the 700 jobs at and around the plant but if it had proceeded as planned by the receiver would have threatened their redundancy payments. Many workers have already discovered there is not the money in the company pension fund to cover their pensions. Last October the fund was 111 million euro in the red, a situation that can only have got worse since. Although one of the bids for the plant, that of Clarion Capital, would see some jobs being saved there is a danger these would be at greatly reduced pay and conditions. The author of the other bid, KPS, seems only interested in the "group’s intellectual property assets, which would include its brand names, product designs and manufacturing processes".
Statement by Cork WSM in support of Waterford Glass Occupation
The Waterford Glass workers have taken a stand. At a time when 'talks' and more 'talks' are leading to huge concessions for us workers - be that in the private sector or in the public sector - they have said enough! On Friday, very publicly and with determination, the reacted to the threats and lies of the receiver appointed by Waterford Wedgewood, and seized the plant and offices at Kilbarry in Waterford city. The Workers Solidarity Movement salutes their stand and offers then full solidarity and support.
In the last while there has been an unprecedented assault on our living standards. Huge numbers of us have been put out of jobs or put on short time; we have been told bluntly 'Take a pay cut or your job is gone'. Our union leadership has reacted to this with offers of talks and with appeals for calm. While doing this they have leaned over backwards to meet the demands of the bosses and the Government. Against this scenario, the Waterford Glass workers have said NO MORE. The time for talking with your hands tied behind your back are over! Workers did not create this crisis and they sure aren't going to pay the huge price that is being asked to solve it!
The WSM is mindful of the reality that the Waterford Glass workers in Kilbarry are in very difficult situation. Their jobs are on the line and a blatant attempt has been made to rob them of not just of these jobs but also of any outstanding monies that are due to them. It is very clear also that the future for huge numbers of workers and their families are on the line here. This is an example of where solidarity can count and can make all the difference. It is crucial now that we build and show as much support as we can for the action of these workers. It is also vital that rank and file workers mobilise to help extend this action. We urge the following as a priority:

· Send message of support to the workers at Kilbarry F:
+353-(0)51-332716
· Organise collections and send a delegation to visit the occupation
· Organise a solidarity protest where you live.
· Raise the issue in your union or college.

Interview with Joe Kelly, Chairman of UNITE in Waterford Crystal
Members of the Cork branch of the Workers Solidarity Movement travelled to Waterford to offer solidarity support to the occupying workers. While there we took the opportunity to do an interview, asking the kind of questions that fellow workers and readers of Indymedia might be interested in, and also took some photos.
Download the MP3 file here: http://www.indymedia.ie/attachments/feb2009/wsm_waterford_crystal.mp3
Posted by mollymew at 11:13 PM