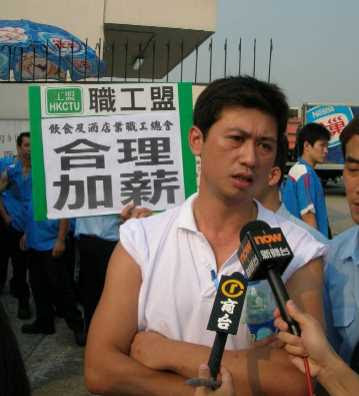 INTERNATIONAL LABOUR-HONG KONG:
NESTLÉ VERSUS THE WORKERS:
The following is from the IUF, an international food workers' federation. It's about the union busting efforts of the international conglomerate Nestlé.
,,,,,,,,,,,,,,,,,,,,,,,,,,
Nestle moves to smash union in Hong Kong, restore decades of abusive labour practices:
Share this article.
Just two weeks after the IUF-affiliated Hong Kong Nestle Workers Union called off industrial action as a sign of good will and to pave the way for negotiations on granting permanent employment to temporary workers and establishing formal union recognition, the company launched an aggressive assault on the union by suspending the union president, Chan Pong Yin, indefinitely. In doing so the message from management is clear: Nestle wants to return to the 17-hour workdays, wage increases of one percent in 12 years, and a system of insecurity maintained by having a third of the workforce on revolving casual contracts.
It was precisely these conditions that led to the strike in July 2008 that not only brought production to a standstill during peak season, but shocked the Hong Kong public by exposing such outrageous working conditions in the world's largest food manufacturing company. In the months following the strike the company has tried to repair its public image, while making a series of commitments to improve working conditions without actually implementing them.
The extreme hypocrisy of Nestle management was soon revealed when it followed up on the promise to grant permanent employment to casual workers (many of whom had worked there for 10 years) by firing them one by one before their contracts expired.
The same hypocrisy underpinned management’s response to union recognition - a fundamental trade union right that Nestle repeatedly claims it respects globally, but which management consistently violates.
In the case of Hong Kong, Nestle stated that it would grant union recognition if the union represented a majority of workers in all departments (the union currently represents 98 per cent of the drivers, loaders, sales and delivery workers in the ice cream and milk departments). At the same time workers in all other departments were warned against having contact with the union. In particular, workers in production who signed a union petition demanding wage increases last year were subjected to harassment by management and supervisors, who ordered them to stop all contact with the union.
With the indefinite suspension of the union president on 17 February it is absolutely clear that Nestle management has no intention of allowing the union to exist at its Hong Kong factory and its earlier commitments on the rights of casual workers and union recognition are meaningless.
The Hong Kong Nestle Workers Union is forced one again to prepare for industrial action - and once again will receive the full support of the IUF, its worldwide membership and allies. The IUF is also working with the union to prepare a submission on the violation of the OECD Guidelines on Multinational Enterprises - the fifth such complaint filed against Nestlé which is becoming a "serial offender" in the context of agreed world-wide standards designed to bring decent corporate behaviour to the actions of global companies.
See previous stories:
Nestlé Hong Kong Workers Prepare for Industrial Action, 20 Jan 2009
Nestlé Hong Kong Strike Success, 29 Jul 2008
,,,,,,,,,,,,,,,,,,,,,,,,,,,,
It was only FEW HOURS, but strike action on the part of Hong Kong workers has forced management to back down. Here's the story, once more from the IUF.
,,,,,,,,,,,,,,,,,,,,,,,,,
Nestlé Hong Kong: Strike action wins dramatic step-down from management:
Share this article.
Hong Kong Nestlé workers took strike action at 6.30 am on Saturday morning to force the reinstatement of their suspended union president.
Within five hours management had agreed to meet the union and, faced with strong united action, withdrew the suspension of union president Chan Pong Yin and another worker suspended at the same time.
The IUF had directly contacted Nestlé headquarters and called for direct intervention with their local management and a swift and fair end to this most recent conflict.
In Geneva IUF general secretary Ron Oswald commented, "It's good to see that Nestlé has seen sense in this case and we congratulate our members for their determined and courageous action in defence of their union". Oswald added, "Now we look to Nestlé to end its constant harassment of these workers and our members' effort to build a strong independent union. We demand the company fully recognizes their union with all the associated rights our members have every reason to expect."
Posted by mollymew at 3:30 PM